We tracked down the origins of the rumor that was displayed in online advertisements. 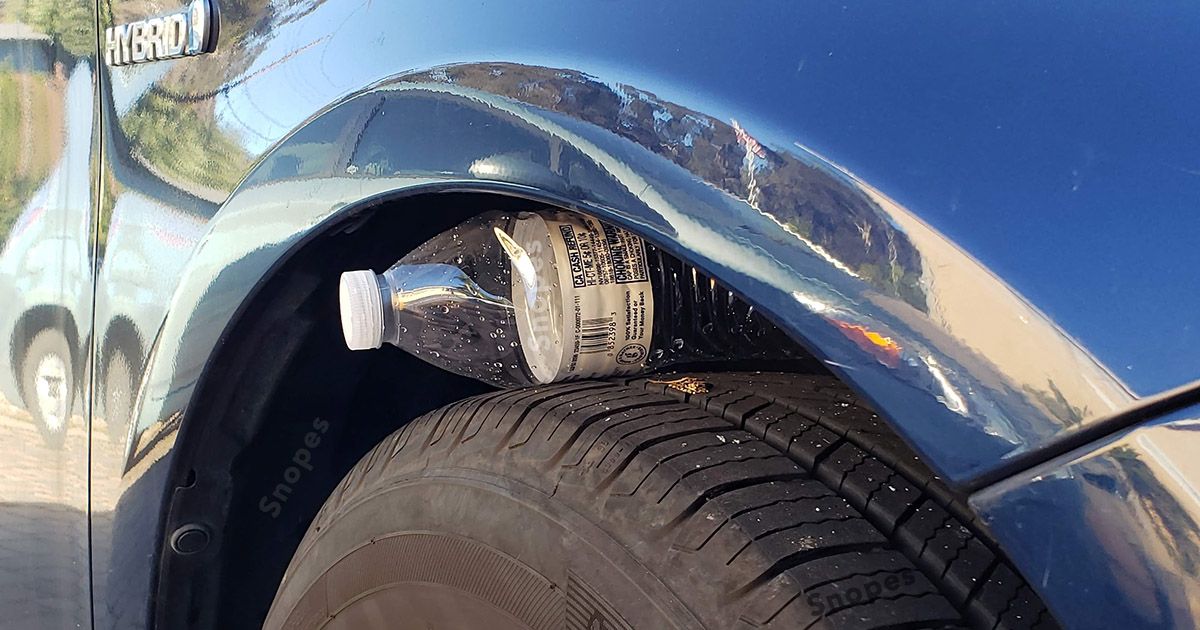 Claim:
Drivers should always put a plastic bottle on their tires when parked.
Rating:

In early November 2021, an online advertisement showed a plastic bottle on a tire on a parked car with the text: "Always Put a Plastic Bottle On Your Tires When Parked, Here's Why." A variation read, "Jam A Bottle In Your Parked Car's Tire When Traveling Alone." The water bottle brand in the ad provided a hint as to where the photograph was taken.

We found the ad on a number of news websites alongside legitimate news stories, likely leading some readers to believe that the plastic bottle tip was genuine.

The brand of the water bottle in the picture was Akba (Aqua). We traced it to Russia, which might also be where the advertiser is based.

We clicked the ad. It led to a 50-page slideshow article on a website named Richouses. Its headline read: "Car Maintenance Tips To Help Keep Your Vehicle In Perfect Condition." The same article was also posted on Definition.org, even showing another picture of a plastic bottle on the tire of a parked car. This picture appeared at the beginning of the 50-page article on Definition.org. The rest of the story mentioned nothing about putting a plastic bottle on a tire.

We flipped through all 50 pages on both websites. The idea to "always put a plastic bottle on your tired when parked" was never mentioned.

This misleading ad looked to be twisted from a previous online scare we reported on in 2018. It also involved plastic bottles, tires, and parked cars. However, in this case, criminals were supposedly placing the bottles in wheel wells so they would make a crunching sound. In theory, this would cause the driver to exit the vehicle to investigate. At that point, the driver would be carjacked. However, our conclusion of the claim was rated "Unproven" as we found no reports that a criminal had done this to anyone. This photograph went around on social media in 2018.

Further, as for the "always put a plastic bottle on your tires when parked" ad, we've seen this usage of the word "always" before. For example, other ads said to "always" put a towel under a hotel door, "always" put coins in a hotel's sink, and "always" put a bag over a car mirror.

In sum, no, drivers don't need to put a plastic bottle on their tires when parked. The clickbait advertisement was crafted to make readers click through 50 pages for nothing so that the advertiser could make more money on the ads viewed on each of the 50 pages than it cost to display the original ad that led them there.