Does Finding Cheese on Your Car Hood Mean You Are in Danger?

Human traffickers are too smart to try to snatch unwitting victims from public parking lots with odd 'distraction' schemes. 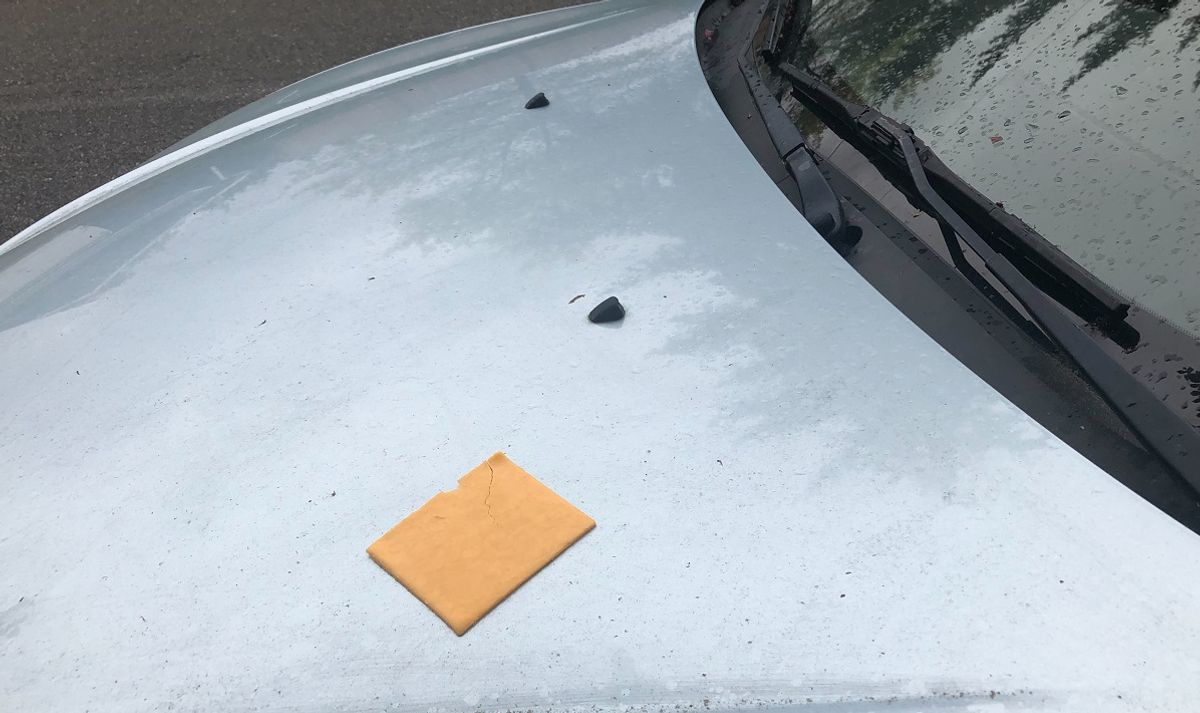 Claim:
Finding cheese on the hood of your car indicates you are in danger of abduction.
Rating:

In May 2021, iHeartRadio posted an article headlined "If You Find A Slice Of Cheese On Your Car - You Might Be In Danger." That article warned readers that a motorist's discovering a piece of cheese on a car's hood was a potential indicator the driver was being targeted by abductors:

It might sound silly, but a TikTok user named Mimi is very serious about her experience. She posted a video which she said is "for all my ladies out there." In it, Mimi explains how she came out of church on Sunday to find cheese melted on her car. Likely thinking it was just some kids' prank, she called a friend to help scrape it off, but when her friend arrived, a white van with men in it two parking spots down from her pulled out and went to a lot across they street, where they parked so they could watch the women clean off the cheese.

Mimi said it took an hour to get rid of the mess and stated, "I personally had no idea that they were using this as a tactic to take people now and if I hadn't called my friend, I could have easily been taken in the hour that it took me to scrape off the cheese and this happened at my church, so I can't even imagine where they're trying to use this on people."

Mimi went on to warn, "If you see cheese on your car, lock it, leave, do not stay in that parking lot because they can easily take you and they're watching you."

As usual with rumors of this ilk, no evidence was offered that the presented scenario had ever occurred at all, much less was a common form of crime. The entire report was based on a TikTok video by a woman who said she found a piece of cheese melted on the hood of her car in a church parking lot and scraped it off, while two men parked nearby watched her -- positing (based on nothing) that these two things were somehow related in a way that should be concerning to viewers:

Like so many other examples of spurious crime warnings we've examined over the years, this one postulates an inefficient and implausible scheme for abductions perpetrated by kidnappers and human traffickers.

For starters, the would-be malefactor would need to case public parking lots, wait for a car driven by a single female to park, place cheese on the car hood after the driver was out of sight, wait around for the cheese to melt, furtively stake out the area and wait for the driver to return to her vehicle (without having any idea when that might happen), and then hope that the putative victim didn't notice the cheese until after entering her car and also promptly exited her car again to remove the cheese from her hood before driving off. Not a terribly efficient procedure.

As well, this approach makes little sense as a stratagem for carrying out abductions. If criminals wanted to snatch a person from a parking lot, they would gain no advantage in allowing that person to enter her vehicle and then luring her back out again. Far better to grab the victim before she can unlock her car door, before she can start the engine, before she can release the vehicle's parking brake, before she can put the car in gear, before she can pull out her cell phone, and before she can do anything else that might help her escape. Trying to trick someone into getting out of their vehicle after they've had the opportunity to take one or more of these actions would only be useful if the criminal's intent were to make off with the car itself rather than its driver. (And even if stealing the vehicle were the real motive, car thefts tend to be much more crimes of opportunity than of the type of patient plotting outlined here.)

Moreover, as we frequently note about related warnings, the plot described above isn't representative of how human traffickers generally work. Rather than indiscriminately grabbing victims from public places, they employ other means for luring or coercing their targets into their fold. According to the Montgomery Advertiser:

[E]xperts say these stories — young girls snatched from their mothers in broad daylight, stalked in crowded supermarkets and kidnapped across the U.S. border — aren’t true.

And worse, spreading them can hurt, not help, efforts to dismantle human trafficking.

Traffickers are too smart to try to snatch unwitting victims from grocery store parking lots and city parks, authorities say, despite urban legends that continue to circulate on social media. Though there are some cases of kidnapping in human trafficking operations, they are relatively rare. Some victims are coerced or forced into trafficking through familial or romantic relationships ... Tuscaloosa Police Department Lt. Darren Beams said he's encountered victims who were promised money for college from a part-time job, only to become trapped in a trafficking ring. Victims most at risk [are] those without familial or community resources to turn to, or those fearful of authorities.