The alleged trick of distracting a driver by cramming a plastic bottle in a wheel well runs counter to how most carjackers operate. 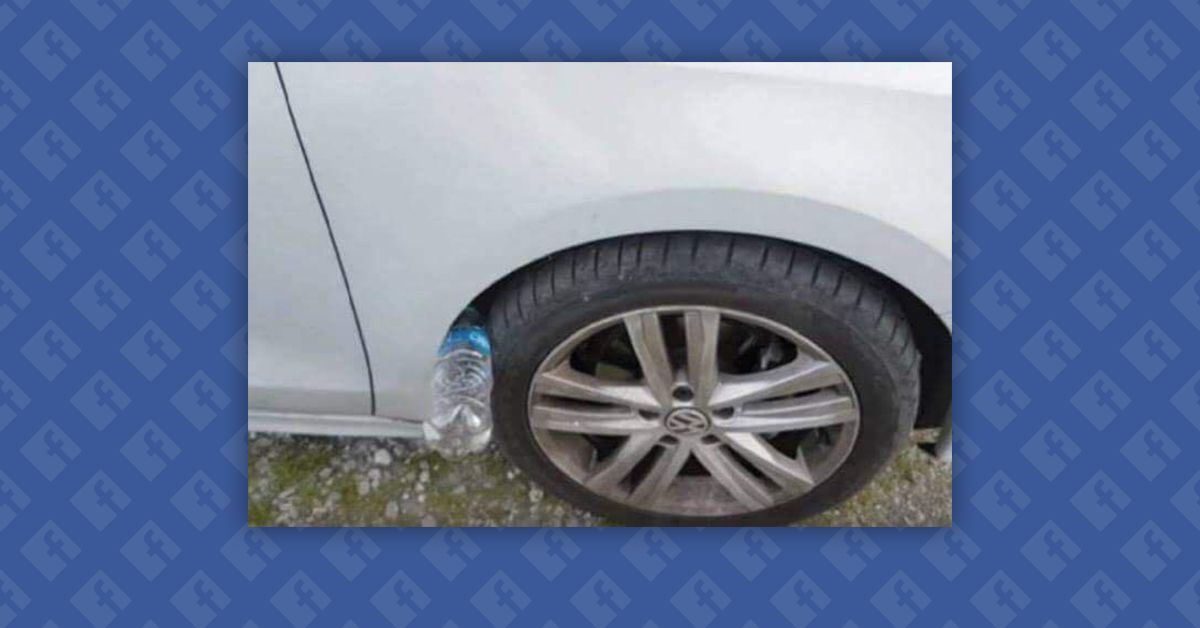 PLEASE READ Police warn: if you find a plastic bottle near your car, you may be in danger

Just when we thought thieves used the highest technology to commit their flights and scams come with this: the tip of the plastic bottle. As the authorities explain, the thief puts a plastic bottle without water and sticks it in the wheel before your car. When the driver starts, he hears a very strange sound, it is the noise that is generated when the bottle is crushed. Déconcerté and worried, the driver comes out of the car to see what happened and the thieves immediately take advantage of that moment to get into the vehicle and take it in a very easy way. The police ask all users to share this information and thus avoid other flights with this simple trick.

The post included a photograph of the purported "simple trick" involving an empty plastic bottle: The post was shared more than a quarter of a million times in under a week, but the claims made were far from novel. Use of an empty plastic bottle was simply a variation on a long-running theme in urban legends about crime and how to avoid being targeted by those who might do one harm. Before thieves were purportedly using plastic bottles to carjack drivers, popular iterations of the rumor held the same feat was accomplished by:

The South African Police Service website has a page on safety awareness while driving, which mentions that "Car jackers may stage a minor accident so they can approach your car." The page does not mention plastic bottles or any other similar ruses, however.

Guidelines issued by the U.S. State Department (a governmental agency focused in part on protecting Americans abroad) in the early 2000s described a number of tricks employed by carjackers, noting that carjacking was "one of the most prevalent crimes in many parts of the world." None involved distracting a driver with a plastic bottle, ring, or shirt, and all "common attack plans" hinged on stopping a vehicle in motion through more complex means:

Accidents are one ruse used by attackers to control a victim. Following are common attack plans:

Good Samaritan —-The attacker(s) stage what appears to be an accident. They may simulate an injury. The victim stops to assist, and the vehicle is taken.

The Ruse -- The vehicle behind the victim flashes its lights or the driver waves to get the victim’s attention. The attacker tries to indicate that there is a problem with the victim’s car. The victim pulls over and the vehicle is taken.

The Trap -- Carjackers use surveillance to follow the victim home. When the victim pulls into his or her driveway waiting for the gate to open, the attacker pulls up behind and blocks the victim’s car.

The State Department listed carjacking as an ongoing risk to travelers visiting South Africa, a country of approximately 53 million and which demonstrated a peak of roughly 15,000 incidents between 2008 and 2009. By contrast, the United States population of about 319 million residents had an average of 38,000 carjackings per year in slightly older statistics. As noted on a similar Snopes.com page published in 2004 (and as has been reiterated by law enforcement over the years), such tales remain illogical from the perspective of a criminal:

Our law enforcement contacts have also noted that although the process described above could be used by carjackers or car thieves, they were unfamiliar with any cases of cars being taken in this manner, and the scheme outlined ran contrary to their experience of how such criminals operate ...

Running around parking lots sticking flyers on windshields and then hanging around to wait for drivers to return to their vehicles involves planning and exposure atypical of most carjackers and car thieves; they’re more likely to approach occupied vehicles (particularly luxury cars with high resale value) and force the drivers out (by threatening them with weapons and/or physically pulling them out of their seats).

Like related urban legends, the plastic bottle introduces the comforting perspective that being a victim is avoidable. It implies that by spreading the knowledge we're not only shielding ourselves from potential harm, but helping others learn a simple trick to shield innocent folks from bad actors.

As is typically the case, we found no reports (credible or anecdotal) that anyone had fallen victim to a crime after being distracted by an empty plastic bottle. We contacted the FBI about the rumor, and a representative told us they were unaware of any reports of carjackings involving plastic bottles. We also contacted CB Security North West asking if they had a source for the claim but did not receive a response.