"Garth, please return my grandma," a commenter and fan of "Your Mom's House" joked, posting under one of Brooks' Instagram videos. 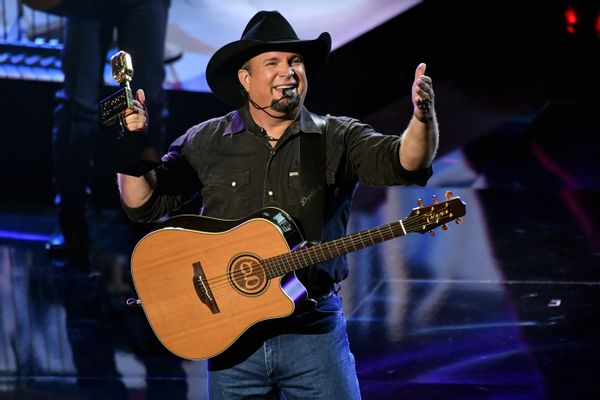 Since 2018, a story has been brewing between country music star Garth Brooks and stand-up comedian Tom Segura. It could be considered a feud, however, it's difficult to define the situation with one word. One reason: It's unclear if Brooks himself is even aware of what's been happening.

Segura and his wife, Christina P., who is also a comedian, host the "Your Mom's House" podcast, which is part of YMH Studios. For the last 3 years, the pair have spent time on the podcast reacting to and joking about various videos of Brooks. The clips primarily came from Brooks' Instagram page. These moments on the podcast led to Brooks' social media comments being flooded with jokes that would likely only make sense to "Your Mom's House" listeners. For the last 3 years, Brooks' social media posts have been flooded with jokes from a podcast.

While a story about Instagram comments might seem small, the high-profile nature of Brooks' decades-long music career, coupled with the fact for nearly three years his most liked social media comments have been filled with jokes from a podcast, led us to research exactly what was happening here.

The beginnings of this story can be traced to around late 2018. In a highlight posted from the podcast, Segura appeared to joke about a theory regarding Brooks after watching a clip of his talking about a new tour.

The relevant part occurs at around the 4:30 mark in the clip.

Segura: What's going on is he's thinking about all the bodies he's got stacked in fucking graves in his yard.

The context of the moment can be watched in the complete highlight clip. This led to countless comments in reference to this moment that continued for nearly 3 full years.

Since 2018, fans of "Your Mom's House" have made numerous jokes in Brooks' Instagram comments in reference to Segura's "all the bodies" remark. Other episodes of the podcast have led to additional jokes and comments that continue to this day.

Some of the moments from episodes where the jokes were born were later reposted as highlights, including: "Cringing HARD At Garth Brooks," "Garth Brooks Sucks," "What's Wrong With Garth?," "Garth's Beard Looks Insane," "Where Are The Bodies Garth?," and "Garth Brooks Cries About EVERYTHING."

Examples of "Your Mom's House" jokes that might be seen in Brooks' comments include: "Garth, please return my grandma," "touch my phone through the fence," "home here now," "I got a DUI baybay," "don't be stingy," "I'll make ya cry," "I'll make ya come," "What?," "Saka soufflé," "you bet I'm coming up in May," "that's where it spits," and "Garth, what did you do to Christina." Bert Kreischer, another comedian who hosts the "2 Bears, 1 Cave" podcast with Segura, is also mentioned in various comments. One example was: "Stop taking Bert to dog shelters G!"

One of the many recurring joke comments Brooks has received.

Not only did these comments appear in Brooks' Instagram feed and on his other social media pages, but in many cases, the only top comments were jokes from the podcast. This likely confused fans of Brooks who don't know about Segura, Christina P., and their podcast.

In early July 2021, Segura mentioned in an episode of the "Your Mom's House" podcast, which was likely recorded in June, that Brooks or his social media team appeared to "restrict" his comments. While Segura could still make comments, the number of likes stayed at zero. Also, any replies to Segura were automatically hidden. This was also referred to as a kind of a partial shadowban. A full shadowban is when someone can comment on social media, but no one sees what they post. It's different than a full ban or block, which disallows any engagement whatsoever.

In the episode, Segura comes up with a number of hashtags to get Brooks to undo the restriction of his account. Those hashtags included #justicefortom, #unrestricttom, #GunrestrictT, and #leaveTaloneG. The reason Segura refers to Brooks as "G" is because the country artist uses the letter when signing off in videos, as his tour logo, and for his studio name.

After the episode was posted, it appeared that Segura's commenting abilities may have returned to normal. However, we were unable to definitively confirm this as fact.

Segura is also known as the "Tour Bus Champ", "Water Champ," and "Dunk Champ," and has appeared in several popular stand-up specials on Netflix, as has Christina P.

The couple made the news in the last year after each sustaining different injuries. Segura's injury was captured on video when attempting to dunk a basketball in late 2020, while Christina P. sustained an injury months later while walking down the stairs in their home.

As for where the saga of Brooks, Segura, and "Your Mom's House" goes next, it will all likely be an ongoing story. We reached out to Brooks' team via his website to seek comment on the matter, and will update this story should we hear back.