Should an Empty Toilet Paper Roll or Red Cup Be Placed Under the Toilet Seat at Night?

Online advertisements promised what appeared to be a handy bathroom trick. 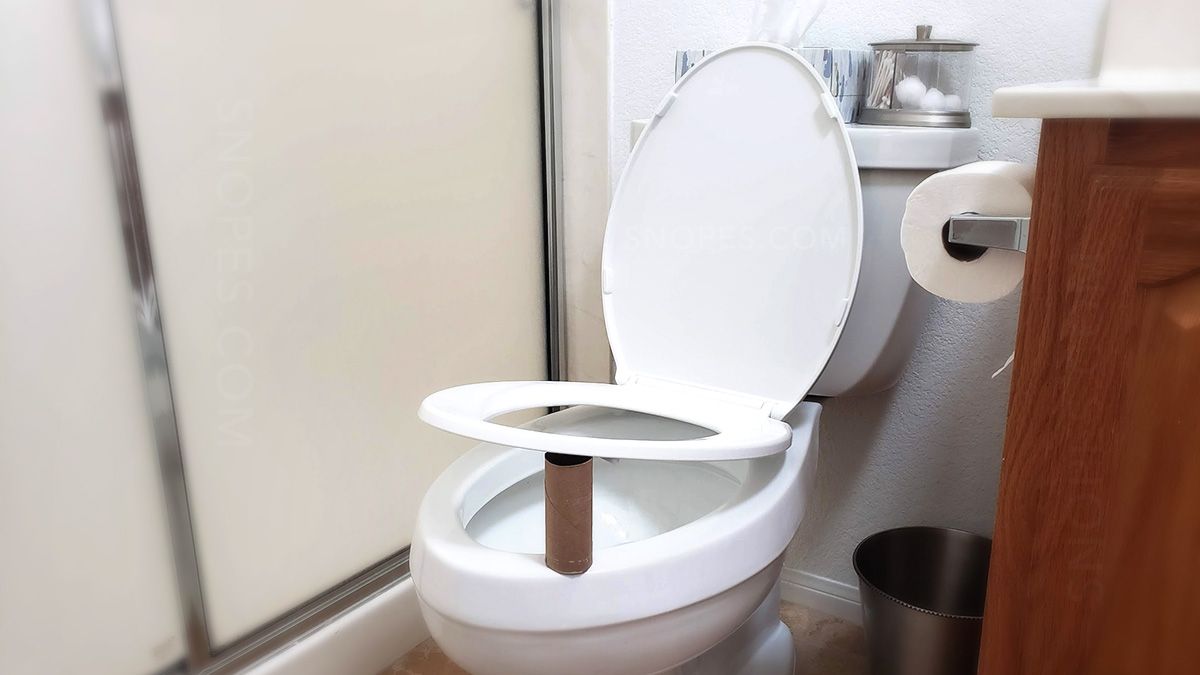 Claim:
An advertisement revealed why people should always place an empty toilet paper roll or red cup under the toilet seat at night.
Rating:

Since at least July 2021, online advertisements have displayed a picture of the cardboard from an empty toilet paper roll or a paper cup propping up a toilet seat. The ads appeared to promise a handy bathroom trick. For example, this ad appeared next to an article on the New York Post website. This ad was hosted by the Outbrain advertising network and was perhaps displayed on a large number of websites.

The ad read: "[Pics] Always Place a Toilet Paper Roll Under the Toilet Seat at Night, Here's Why." A variation of the same ad said: "[Pics] Put A Toilet Paper Roll Under Public Toilet Seat, Here's Why." They were sponsored by the Maternity Week and Definition.org websites. Yet another variation of the ad said: "40 Brilliant Life Hacks Nobody Told You About."

We also saw one that used a red cup instead of an empty toilet paper roll. "Always Place A Red Cup Under The Toilet Seat At Your Hotel, Here's Why."

Some social media commenters said it might be to warn others that there's no more toilet paper.

Clicking on one of the ads led to a 41-page slideshow article and a headline that read: "These 40 Brilliant Tricks Will Make Even The Hardest Items To Clean Sparkle." The story's first page read as follows:

Ever looked forward to cleaning the house? We didn’t think so! But when it absolutely, positively has to be done – when your bathroom’s looking a little grubby, for instance – we’re here to help.

These 40 incredible hacks will make sprucing up your home an absolute breeze. And you just won’t believe what you can do with a cardboard bathroom tissue roll...

On that first page, the story once again teased some grand trick with a cardboard toilet paper roll, perhaps involving a toilet seat and nighttime. The web address (URL) even mentioned the toilet paper trick for what is known as UTM tracking. This meant that the website's creator was tracking whether the ad was successfully getting clicks and bringing in readers. After all, someone was apparently paying to run the ads on the Outbrain advertising network, so it's typically important to figure out if they're worth the investment.

The article contained several odd household tricks. One claimed it would be good to put hairbrushes in the dishwasher. Another advised about pouring various liquids down the drain, which we covered in two previous fact checks about dish soap and salt. We also found a questionable oven cleaning tip, plus purported bread uses, which we also covered in the past.

On page 41, which was the last page, a toilet paper roll trick was finally revealed. However, it had nothing to do with placing it under a toilet seat at night. It simply advised to attach a cardboard roll to a vacuum cleaner hose to reach crevices. The 41-page article never mentioned a word about why to always place a toilet paper roll under a toilet seat at night. It was nothing but clickbait. We clicked "next page" 40 times so you don't have to.

We looked to home improvement websites such as BobVila.com to see if there was perhaps a legitimate purpose for the toilet paper roll or a red cup going under the seat. However, we found no such tips, tricks, or "life hacks."

After this story was published, a reader sent in a tip that said an empty toilet paper roll propping up the seat might be a helpful warning to the next person to enter the stall that there's no toilet paper.

We've clicked through thousands of pages in these kinds of strange slideshow articles that come from scammy ads. The subjects have included Tom Selleck, Disneyland, Costco, Alex Trebek's net worth, and around 100 other topics. Check out our entire collection. Each of our stories is presented on a single page.