Did Nike Offer 'People of Color' a 75 Percent Off Coupon? 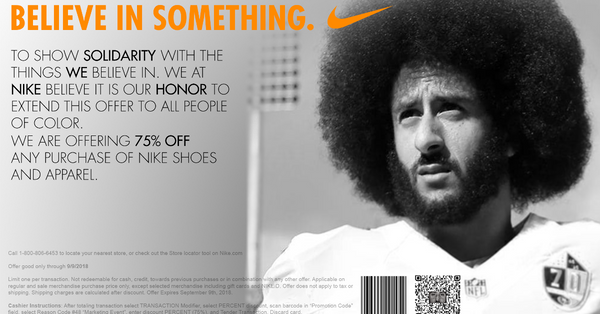 Nike's September 2018 advertising deal with Colin Kaepernick caused a storm of controversy and debate in September 2018, with calls for a boycott of the company by those opposed to the national anthem protests against racial injustice which Kaepernick led by "taking a knee" during the 2016 NFL season.

The deal also prompted a wave of misinformation and junk news, include fake reports that the University of Alabama, the federal government, and Michael Jordan had all cut ties with Nike over the Kaepernick deal, that Kaepernick had immediately lost the deal after an "anti-white" rant, and a viral hoax which falsely claimed that one man had ended up in the hospital after symbolically setting fire to his Nike shoes, while still wearing them.

In the days following the announcement of the endorsement deal, internet users began sharing fake Nike coupons which purported to offer 'people of color' significant discounts on Nike shoes and clothing, as part of the ongoing "believe in something" campaign being headed by Kaepernick.

In an archived 5 September thread on the controversial /pol ("politically incorrect") section of 4Chan, users posted three versions of the fake coupons -- one offering 'people of color' 75 percent off shoes and apparel until 1 January 2019, another offering the same discount until 9 September 2018, and another offering "urban youth" 80 percent off shoes and apparel until 31 October 2018: In a conversation riddled with racist tropes, slurs and imagery, 4Chan users discussed plans to print out the fake coupons and distribute them in shopping malls and near Nike stores in an effort to cause confusion and mischief.

In a potentially dangerous twist, the QR code on the second coupon reveals a threatening message when scanned with a QR reader: "This is a ROBBERY, Move slowly and put all the LARGE bills in the shoe box OR everyone DIES."

In reality, Nike did not offer any such discount coupons in September 2018, as none was listed among the company's official list of promotions and discounts. A small image of Kaepernick's face in the QR code of two of the coupons further confirmed that the artifacts were hoaxes.

The /pol section of 4Chan has a history of racially-charged hoaxes such as the "Nike coupon," which appeared in September 2018. In April 2018, 4Chan users concocted a similar fake Starbucks coupon for a free drink for customers "of African-American heritage." The fake coupon emerged after a controversy in which Starbucks apologized when two black men were arrested while waiting in a Starbucks coffee shop in Philadelphia. When scanned, the QR code in the Starbuck fake coupon displayed the word "nigger."