Were Two Black Men Arrested for Waiting at a Starbucks?

Philadelphia police are investigating an incident captured in a viral Facebook video. 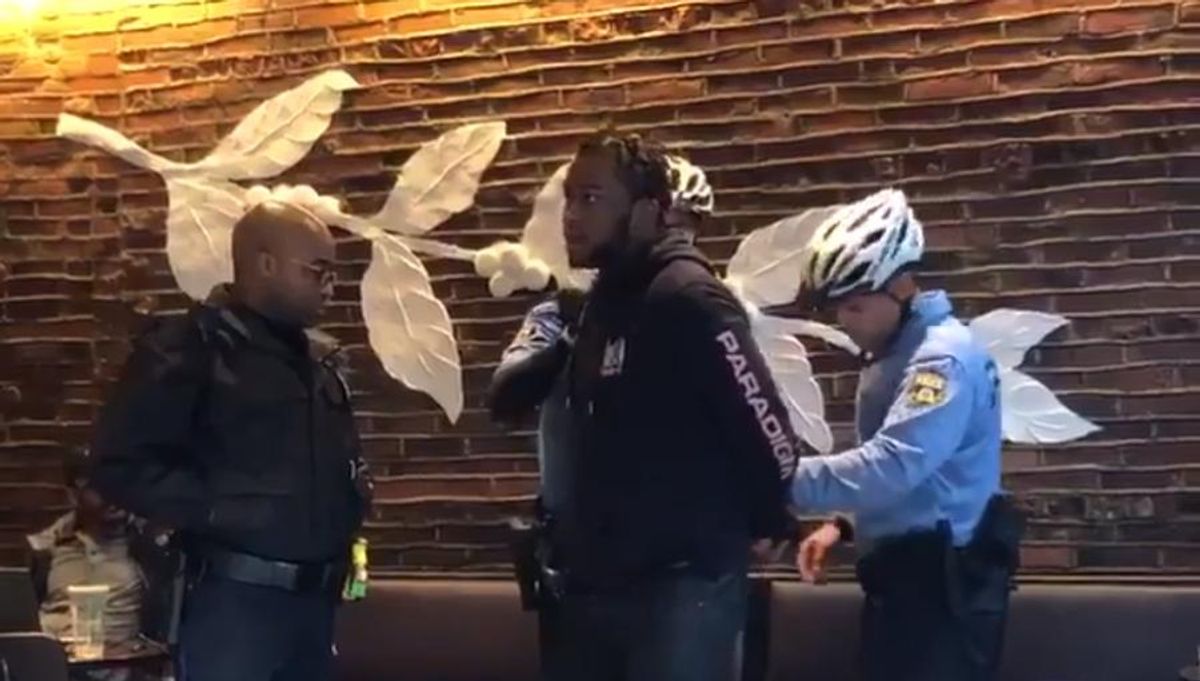 Claim:
A video shows two black men being arrested while waiting for a friend at a Starbucks.
Rating:

A video of an incident at a Philadelphia Starbucks went viral after it was shared with text stating that it captured two black real estate agents being arrested simply for waiting on a friend at the coffee chain outlet:

Two Black real estate agents were arrested at a Philadelphia Starbucks for waiting for a friend who showed up as they were being handcuffed. The police were called by a barista because the men hadn’t ordered anything, yet.

Many of the white patrons at the Starbucks wondered why they have never been arrested while waiting to meet someone for coffee.
#BoycottStarbucks
#BlackLivesMatter

The event captured in the video reportedly occurred on 12 April 2018 at a Starbucks located on 18th and Spruce, and the Philadelphia Police Department say an internal investigation of the incident is underway.

The video shows multiple officers arresting two men inside a Starbucks, and according to Melissa DePino, who posted video of the incident, "police were called because these men hadn’t ordered anything [while] they were waiting for a friend to show up" and the two men "were taken out in handcuffs for doing nothing" just as their friend arrived:

@Starbucks The police were called because these men hadn’t ordered anything. They were waiting for a friend to show up, who did as they were taken out in handcuffs for doing nothing. All the other white ppl are wondering why it’s never happened to us when we do the same thing. pic.twitter.com/0U4Pzs55Ci

A second video shows the minutes leading up to their arrest; police surround the men as they sit calmly at their table:


Philadelphia police have not yet disclosed why the two men were arrested, saying only that they were "aware of the incident" and that the matter is "under internal investigation":

We are aware of an incident that occurred on 4-12-18 at the Starbucks Café at 18th and Spruce. The entire incident, including the actions of the responding officers, is under internal investigation. Once we gather all the facts, we will comment further.

Starbucks corporate likewise said via Twitter that they were "aware of the incident" and were "reviewing the incident with our partners, law enforcement and customers to determine what took place":

We’re aware of the incident on Thursday in a Philadelphia store with 2 guests and law enforcement, resulting in their removal. We’re reviewing the incident with our partners, law enforcement and customers to determine what took place and led to this unfortunate result.

The two arrested men were taken to a police station, fingerprinted and photographed, then released eight hours later because the district attorney found no evidence they had committed a crime and Starbucks expressed no intention to press charges.

In a statement issued via Facebook Live, Philadelphia Police Commissioner Richard Ross defended the actions of officers in the video, saying that they "did absolutely nothing wrong":

The employees told officers the two men wanted to use the restroom but were told the facilities are only for paying customers. The Starbucks employees then asked the men to leave, but they refused, Ross said.

"They did a service that they were called to do," Ross said of the officers. "And if you think about it logically, that if a business calls and they say that someone is here that I no longer wish to be in my business, (officers) now have a legal obligation to carry out their duties. And they did just that."

Ross, who is black, referenced his own experiences while making his case, saying, "As an African-American male, I am very aware of implicit bias."

"We are committed to fair and unbiased policing and anything less than that will not be tolerated in this department."

Starbucks extended an apology to the "two individuals and our customers for what took place," promising to review their policies so that "these types of situations never happen" again:

We apologize to the two individuals and our customers for what took place at our Philadelphia store on Thursday. pic.twitter.com/suUsytXHks

Horton, Alex.   "Two Black Men Were Arrested Waiting at a Starbucks. Now the Company, Police Are on the Defensive."     The Washington Post.   15 April 2018.