Is Drone Video of a Bear Chasing a Man in Snow Real?

The video was posted to the r/Unexpected subreddit on Reddit with the caption: "Such a lovely day to test out my drone." 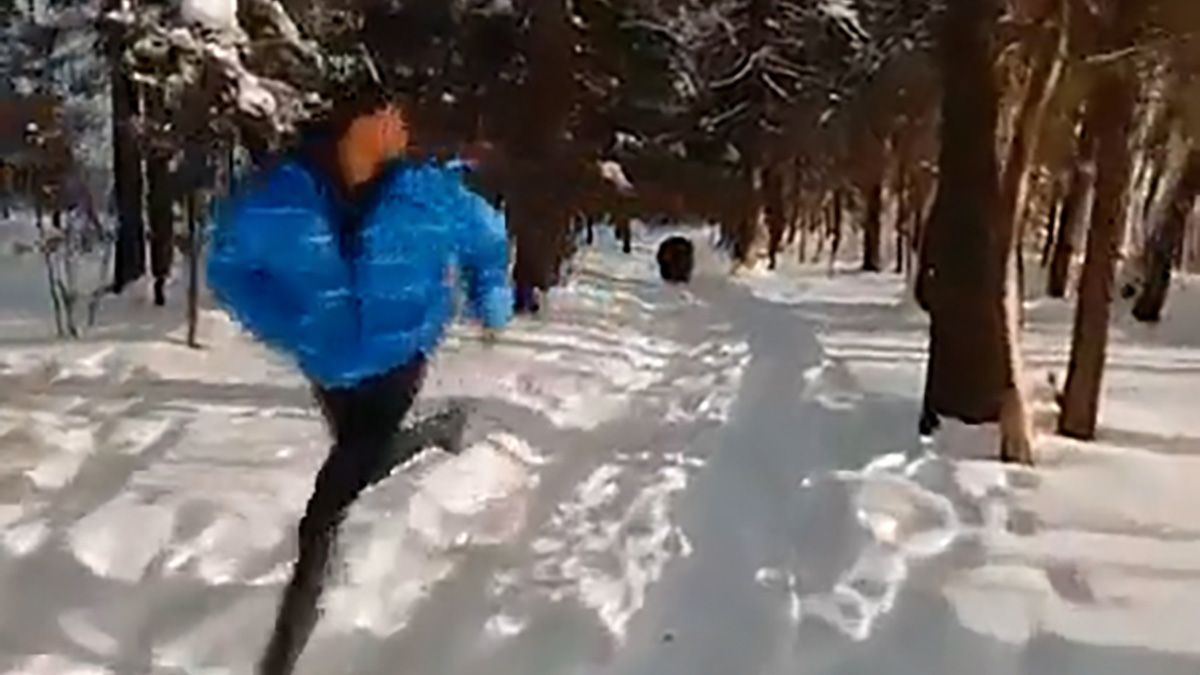 Claim:
A drone flying between trees captured video of a person being chased by a bear in the snowy wilderness.
Rating:

The video was real. The bear, whose name is Tom, was said to have been trained since birth.

On Jan. 26, 2022, Reddit user u/namey_mcnameson posted a video that purportedly showed the view of a drone flying between trees in a snowy wilderness to reveal a man being chased by what might have been a grizzly bear. The caption of the video on the r/Unexpected subreddit read: "Such a lovely day to test out my drone."

Our research for this story took several twists and turns. At one point, we believed that we had uncovered clear evidence that the video had been at least partially faked with visual effects. However, we later received an email and proof that showed the bear in the video was a real, trained animal.

Some commenters initially believed that the video might be the work of a CGI artist. "The snow doesn't flick up very naturally from the footsteps," u/wealllovethrowaways said. "It's very likely CGI, but it's damn good CGI." The best available resolution for the video on Reddit appeared to be 418x480, which was quite low. If the video did contain some CGI work, one good strategy to hide that fact might be to lower the quality of the clip to make it more difficult for viewers to study details. One user believed it to be animation created with the graphics software Blender. Others discussed just how fast bears can run, saying that the person in the video would have been bear food within seconds. "That bear is a paid actor," joked another person.

However, some users weren't so sure it was fake. "I'm under the impression that this is a real video without audio, but the audio was added for comedic effect," a commenter said. That comment had more than 200 likes in agreement with believing the video was real. Another person concurred: "I second this theory." Speaking of theories, several people also mentioned a one about it maybe being a "trained bear."

The sound in the clip initially appeared to have been recreated and was not the original audio. The audio from drones can often sound like little more than loud whirring or buzzing from the mechanics that enable it to fly.

The one thing that all of the Reddit comments had in common was that no one was initially able to uncover definitive evidence of the origins of the supposed drone video.

Hours after it was posted to Reddit, the moderators of r/Unexpected unexpectedly removed the thread with the video. Sometime after that, the video was later tweeted by @TheoShantonas with the caption, "Lovely day to test out a drone":

From there, it was quote tweeted by various Twitter accounts such as "The Dan Le Batard Show with Stugotz," who copied in wildlife expert Ron Magill. Magill responded: "OMG!!! Great video but I find it hard to believe that it wasn't carefully 'produced.' No way that guy could outrun a serious bear in the snow!"

It was at that point that we tried an old trick. After downloading the video from Reddit, we used the Adobe product Media Encoder to take a screenshot of the first frame of the video. We then tried a reverse image search on Google Images. Amazingly, it found one result that read, "Завтрак убегает | Пикабу." The video had been posted on pikabu.ru just one day before it appeared on Reddit.

In the pikabu.ru version of the video, a watermark for TikTok referred to a user named @standartantares. We then visited the TikTok channel for @standartantares and found that the video had been posted on Jan. 24, two days before it showed up on Reddit.

In the comments, the person who posted it said that the audio was a "voiceover." The video's hashtag #krd may have referred to a Russian YouTube account named KRD FPV that posted another drone video shot in the snow on Jan. 22. No videos on the YouTube channel showed a bear.

On the TikTok channel, we found similar drone videos, but only the one with a bear. Two videos appeared to show quite the amazing drone shots of an airplane at sunrise or sunset. Were they real? The hashtags on one of the videos were "#mavic" and "#djv," which appeared to refer to the line of DJI Mavic drones and the DJV visual effects review software that's intended "for VFX, animation, and film production." Another hashtag in one of the videos said: "#magic."

In the comments, @standartantares joked that the man was "still running": These TikTok comments were translated from Russian to English.

At this point, we believed that our work was done and that the hashtag that referenced visual effects meant that there was likely a clever mix of a CGI bear with a background video shot by a drone.

Hours after we found the TikTok account, the relevant videos appeared to have been removed. The user, @standartantares, addressed the deletion of the videos, saying in a comment that they would be added back at a later date.

On Jan. 29, we received an email from Dima Smirnov, who turned out to be the true creator of the drone video with the man running from the bear. He told us that the @standartantares TikTok channel had stolen his videos.

In the comments for his original posting of the bear video, Smirnov told multiple users that it was all real and that the bear was "like a pet." He also referenced the man in the video, @black4riday on Instagram, who also said that the bear was real.

We responded to Smirnov, asking if he could provide more details and perhaps even some evidence. On Feb. 2, he sent the following video that showed the GoPro source files from the drone. He said that the bear, whose name is Tom, had been trained since birth. The video included the original buzzing sounds on the drone's audio and showed more of the bear, as well as proof that the airplane videos were also real:

Smirnov was once interviewed on television about his first-person view (FPV) drone videos, including one that flew over St. Petersburg:

In sum, while for several days we believed the drone video of the man running from the bear to be fake, we later received evidence of Smirnov's impressive creative work. It was all real. For these reasons, we have changed the rating to be "True."

The clip with the drone and the person running from the bear reminded us of another story where we looked at whether or not a TikTok video showed a man saving a dog from train tracks. That video was of higher quality and allowed us to be able to examine small details.

On the subject of bears and videos, we previously were the first to report about the viral video that showed a woman pushing a bear off her fence to save her dogs. We later reported on a video of a bear charging at a man in his own garage. We also covered an incident involving a bear charging at a crowd at a Mammoth Motocross race track. All three happened in California.

On Feb. 2, 2022, the rating for this story was changed from "False" to "True" after we received evidence from the video's creator that it was all real.