Does Photo Show Last Queen of Mongolia Before Execution?

A viral tweet and a Reddit post on r/pics purported to show "the last photo of the last queen of Mongolia, just before she was killed in 1938." 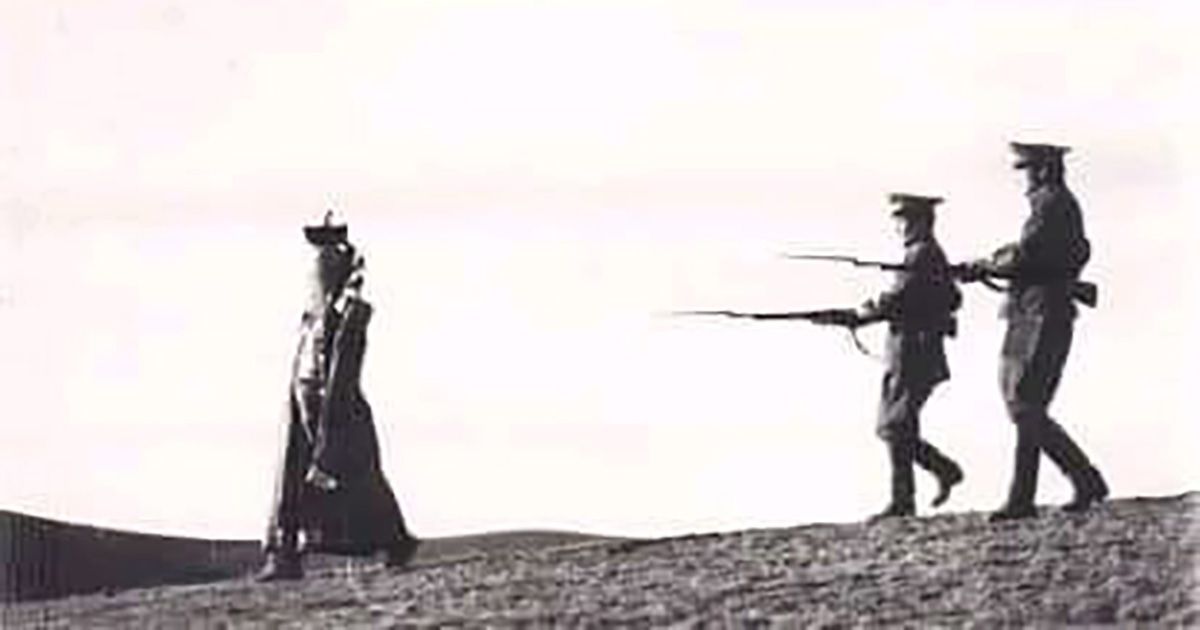 Claim:
A picture shows the last photograph of the last queen of Mongolia, just before she was killed in 1938.
Rating:

A viral tweet posted on Jan. 23, 2022, claimed to show "the last photo taken of Genepil, the last Queen of Mongolia, moments before she was executed as part of the Stalinist repressions in Mongolia in 1938." In our research, we soon found that this caption was inaccurate.

The picture in question showed two men pointing guns at a woman in a field: The tweet was shared tens of thousands of times.

The first picture on the left side of the tweet was not in question. According to various sources, the close-up photograph was believed to perhaps show Genepil posing in Mongolia in the 1920s. (We also found references to the notion that her appearance inspired the costume design for the character Queen Amidala in "Star Wars Episode I: The Phantom Menace.")

Two days after the viral tweet, a Reddit user posted the same photograph of the men with pointed guns and claimed it showed "The last photo of the last queen of Mongolia, just before she was killed in 1938": The Reddit thread was upvoted nearly 50,000 times in the first few hours after it was posted.

One Reddit user asked in a comment: "Do you have a source for this photo that you could share? I don't think I've ever seen this photo of Genepil. Very interesting."

Twitter and Reddit users mentioned a Wikipedia entry for Genepil as their source. The Wikipedia page cited two sources for the line that mentioned her death. They were watson.ch (German) and ugluu.mn (Mongolian). Neither of these two sources mentioned the picture of the two men pointing guns at a woman who was said to be Genepil.

Buried deep in the replies to the viral tweet was a clue. "Sources claim it's from a movie called 'Хааны сүүлчийн хатан,'" @pacific_blues tweeted. After we did a little digging, we found that the tweet was correct.

Without this tip, we may not have found the answer to debunk the claim from Reddit and Twitter.

We found the full version of the Mongolian-language film on Facebook. According to the closing credits, it was released in the year 2000 and appeared to have been shot in Mongolia. The title, "Хааны сүүлчийн хатан," was roughly translated to mean, "The Last Queen of the King." The picture that was said to be "the last photo of the last queen of Mongolia" was simply a screenshot from the 1:55:24 mark in the movie: This scene takes place at the end of "Хааны сүүлчийн хатан." The three characters continue walking into the direction of the sun before the movie fades to black. The character is not shot onscreen.

According to a synopsis on mongol-kino.mn, the story was indeed about Genepil. Roughly translated into English, it reads: "A historical tragedy about the last emperor of Mongolia, Genenpil, the queen of the 8th Jebtsundamba. The last emperor, Eight Bogd Tseenpil, was renamed the Great Fairy and renamed Genenpil." (Several references described her as a former queen consort, which may have been more accurate.)

Jet Set Times previously published that Genepil was believed to have been "shot and killed at the age of 33 when she was five months pregnant" after being "charged with conspiring with the Japanese." She and her father were executed, according to the reporting. (We were unable to definitively confirm various details about her life, as her name didn't appear to show up in many history books.)

In sum, no, a viral picture did not show the last photograph before the last queen of Mongolia was executed in 1938. While records do show that Genepil was killed in 1938, the photograph in question was a screenshot from a movie that was released in the year 2000.