A picture of the two men watching former U.S. President Richard Nixon on television has been shared to Reddit numerous times. 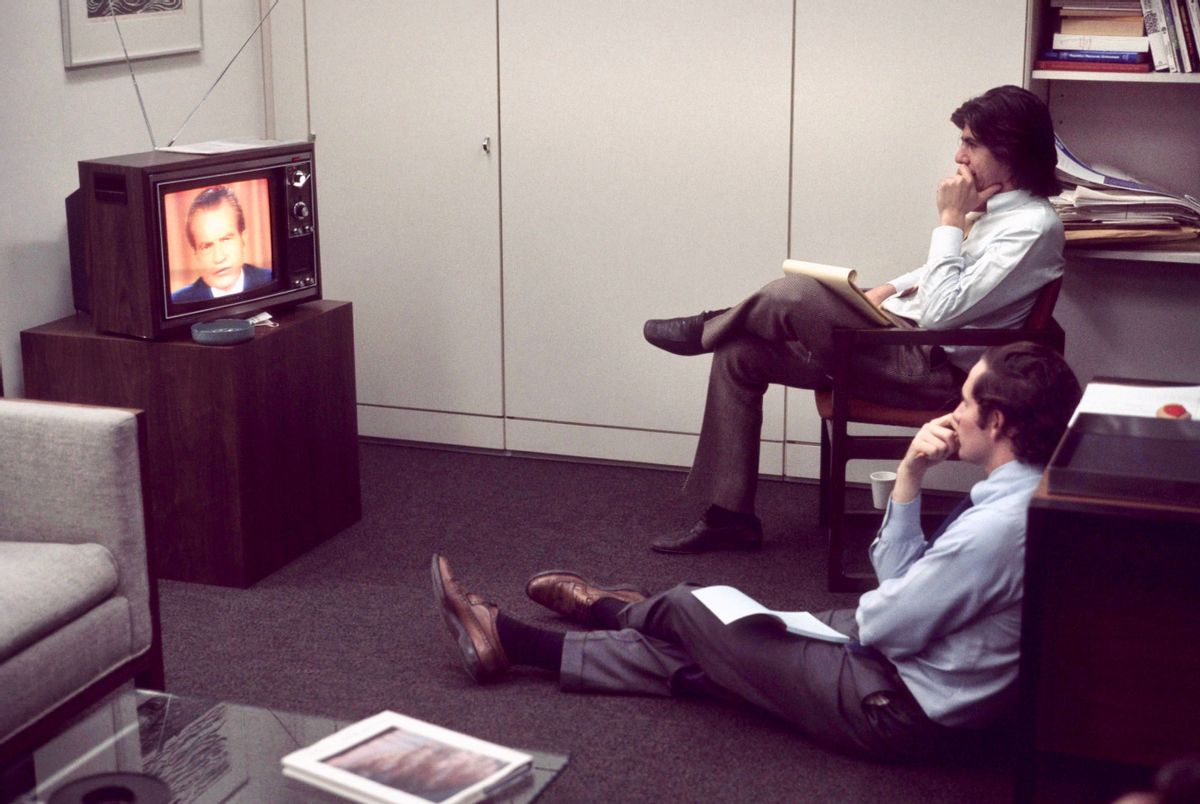 On Jan. 10, 2022, a picture was shared to the r/Damnthatsinteresting subreddit on Reddit that purported to show Bob Woodward and Carl Bernstein watching former U.S. President Richard Nixon resign on live television. "God bless great journalism and great journalists," the thread's caption read. It may have been posted due to the release of Bernstein's book, "Chasing History," which came out the same month. The New York Times hailed it as "a rollicking memoir about the golden age of newspapers."

Woodward and Bernstein are best known for their investigative reporting for The Washington Post on the subject of the Watergate scandal. They filed their first story on the matter in 1972. The image caption below in the viral post says: "After the White House claimed for more than a year that Bob Woodward and Carl Bernstein were making up stories and creating fictional sources, here they are watching President Richard Nixon resign on television." In truth, this photograph did not show the two men watching Nixon resign. Similar captions that have been posted to Reddit many times in the past were not factually accurate.

So when was the picture shot?

Bernstein was sitting in the chair, and Woodward was seated on the floor.

The caption from Beschloss' tweet referred to April 30, 1973, when Nixon gave his first live televised speech on the Watergate scandal. A gold curtain can be seen behind him both in the photograph and a YouTube video that showed the remarks from that evening:

It wasn't until more than a year later, on Aug. 8, 1974, when Nixon delivered his resignation speech on live television. A blue curtain was visible behind him for the 1974 remarks, which differed from the gold curtain seen in the picture of Woodward and Bernstein:

While the photograph shared to Reddit did not show Nixon resigning, it's true that the two men were both at The Washington Post's offices when the former president made the announcement. In fact, the setting may have been similar to when they watched the April 1973 speech.

We know this because, in July 2014, Woodward and Bernstein reflected on Nixon's resignation after 40 years, as did a former reporter for the New Yorker, Elizabeth Drew.

Bernstein recalled that Katharine Graham, then-publisher of The Washington Post, told them that there should be "no gloating" that night. Referring to the evening of Aug. 8, 1974, he said:

Bob and I were in the newsroom. Katharine Graham, the publisher of The Post, had come downstairs from her office. [And] Ben Bradlee, the editor of the paper. There were surprisingly few people in the newsroom because we knew what was coming.

And Katherine actually said to the group of us, "no gloating," and there was no need because my feeling was one of absolute total awe that it had come to this, that finally, the country was going to be spared him in office, and also recognition of the fact that those in the room had had some real role in, in what was happening. But, awe, total awe. And the fact that the system had worked up.

Woodward recalled specific details about the evening in August 1974, including the fact that they had been given bologna sandwiches and that he was "sitting on the floor," just as he had done for the previous speech that appeared in the 1973 photograph:

I was sitting on the floor of Howard Simon's office, he was the managing editor, watching the speech, and this was before the [Jeff] Bezos era. It was the Graham era, and so they handed out sandwiches that night, and I know I remember the very bad bologna sandwich that I was sitting there eating.

Not only did Katharine Graham issue the "no gloating" rule, but Ben Bradlee did. And he was kind of going around the newsroom slowly, not showing any emotion. And Ben and I went to the elevator because we were going to go down and get something to eat. And the elevator opens, and there's [Robert] Sargent Shriver, who had somehow broken into the Post's security system. And Shriver, being the head of the Peace Corps in the Kennedy era, married to one of the Kennedys, very much a Kennedy person, he sees Ben and he goes, "Yay!" And Ben is just kind of, you know, trying to pretend, and Shriver just wouldn't stop it and he just said, "oh, I had to be here this night with you."

Questions and answers from the same panel were available on The Washington Post's YouTube channel:

In 1976, the efforts made by the two reporters appeared on the big screen in the film, "All the President's Men." Robert Redford played Woodward, and Dustin Hoffman portrayed Bernstein. From left to right: Dustin Hoffman, Carl Bernstein, Bob Woodward, and Robert Redford at the 1976 premiere of "All the President's Men." (Photo by Ron Galella/Ron Galella Collection via Getty Images)

In sum, no, the photograph of Woodward and Bernstein watching Nixon on television was not shot when the president announced his resignation in August 1974. The picture was taken in April 1973 during the former president's first televised speech on the Watergate scandal.