The TikTok user who posted the video said that it was recorded in California. 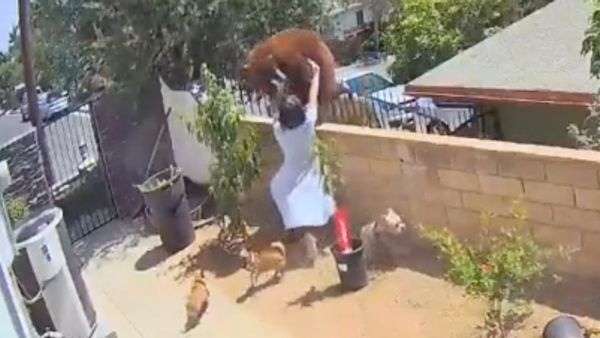 A TikTok video made waves after being posted late in the evening on Memorial Day in 2021. It appeared to show a California woman pushing a brown bear off a fence to save several dogs.

The viral video was viewed nearly 10 million times and shared 30,000 times in the first 6 hours after it was posted. The text portion of the video stated, "My cousin Hailey yeeted a bear off her fence today and saved her dogs. How was your Memorial Day?! (WTF?!)":

The Vivint home security footage showed a woman identified as Hailey run out and push a brown bear off a fence to save several dogs. She then picked up one of the dogs and ushered the others away from the danger: The moment that Hailey ran out to save the dogs. (Courtesy: @bakedlikepie/TikTok)

Four dogs approached the bear, in addition to a neighbor's dog who showed up to check out the commotion. At least two bear cubs were also visible: At least two bear cubs were with the brown bear during the video. (Courtesy: @bakedlikepie/TikTok)

Brenda (@bakedlikepie), the TikTok user who posted the video, chose the "Oh No" song to accompany the clip. She later posted a version of the video without music:

In a comment, Brenda stated that the video was recorded in California. She also calmed down commenters who were concerned about the well-being of the dogs that were involved: "PSA: The dogs and her (Hailey) are okay. No, she doesn't do this on the regular. They were all outside gardening when the pups noticed the bear."

Brenda also mentioned that one of the dogs was "a little scratched" but the injury did not appear to be serious.

The bear and its cubs apparently stayed around after being pushed off the fence but later left the area. "They'll be putting up higher fences," Brenda ventured.

On June 1, Hailey posted her own video. KTLA also reported that she is 17 years old and that the video was recorded in Bradbury, California. Bradbury is located in the San Gabriel Valley, east of Los Angeles.

While the bear seen in the video was brown, it was not a grizzly bear. It also was not a brown bear, despite its color. The proper way to name it is to call it a black bear, even though it's color is brown. The California Department of Fish and Wildlife published that black bears can come in "many different colors [...] from solid black to shades of brown and tan."

The NPS also mentioned that grizzly bears "seem to react to humans at greater distances than brown bears."

We reached out to Brenda (@bakedlikepie) on TikTok about Hailey's pushing the bear off the fence to save the dogs. This story will updated should we receive further details.

Oct. 7, 2021: This story has been updated to clarify that the bear is known as a black bear, despite its brown color.