And don't forget about Dr. Condom, too. 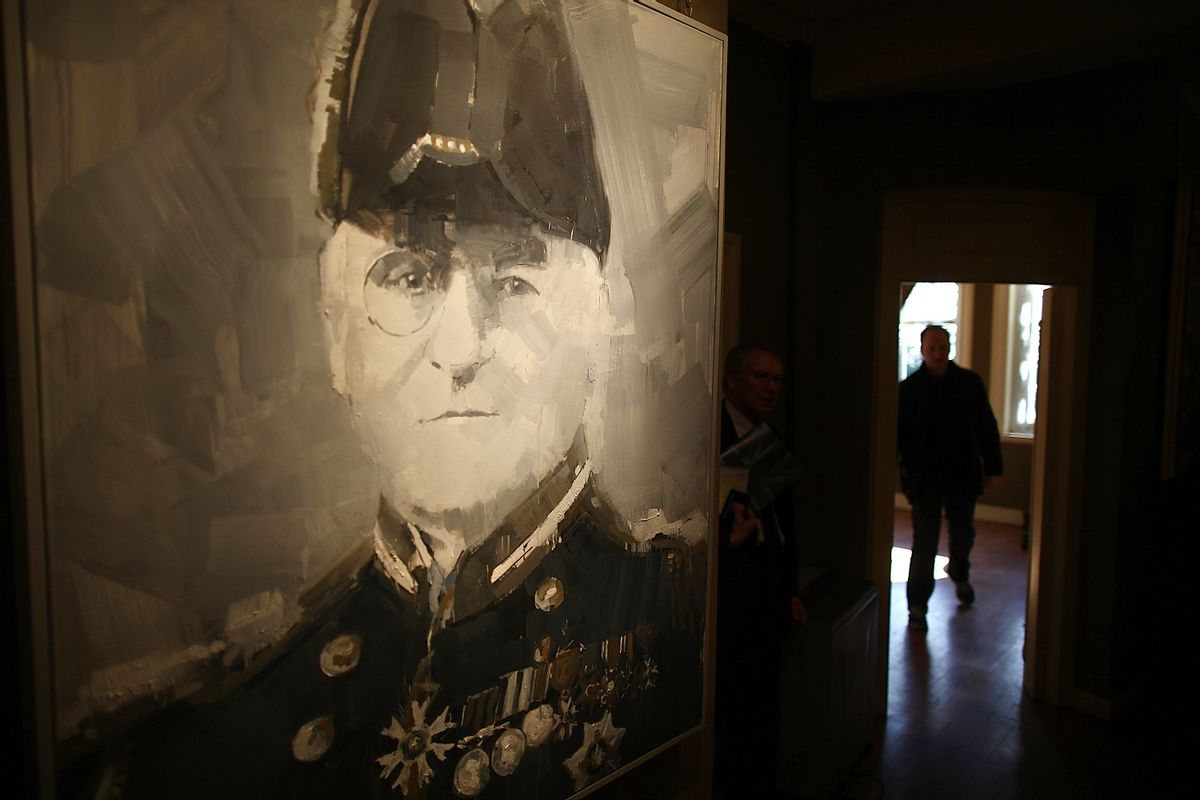 (Note: When researching rumors about decades-old happenings, it can be important to find some data on the subject that was published before the advent of the internet. For example, we once looked into a quote that was attributed to Anne Frank. We found that there were several books that had published her name next to the quote. However, none of those books were written before the year 2000. This was a red flag, since Frank died in 1945. We later confirmed with Anne Frank Fonds, an institution that was created by her father, Otto, that the quote was fake.) In September 1914, his son, Alastair, was driving him in a Rolls-Royce on a road to Paris. During the drive, the car hit a tree, taking Alastair's life. According to Andrew's writing, the accident "quickly passed into the mythology of the Secret Service." Word got around that Cumming purportedly used a penknife to cut off his foot so that he could be freed to crawl to his son's body on the side of the road. This resulted in him receiving a wooden attachment for his leg, which he would place on a child's scooter to make his way around the office while holding his swordstick, "habitually glaring at newcomers through a gold-rimmed monocle."

The oldest mention in a publication of Cumming's idea to use semen as invisible ink came from another work by Andrew that was published in 1983. It was in this year that he penned an article in History Today. In it, he argued that the Lord Chancellor should open up two specific confidential and historical archives related to British intelligence. Within the story, it had a brief mention about having agents write reports in semen:

I do not propose that he open at a stroke the whole intelligence archive up to the Second World War. I simply suggest that he make a start with two unusually diverting documents which I hope might whet his appetite for more. Neither could be of any conceivable use to a potential enemy. Both would be of enormous interest to historians.

The first is the diary (written in two naval logbooks) of Captain Sir Mansfield Cumming, the first head of M.I.6 who died in 1923. Partly because of its entertainment value, Cumming's diary has sometimes been shown to M.I.6's new recruits when they are taken to meet 'The Chief. It is said to give details of his disguises (some obtained from a theatrical supplier), his Rolls Royce motor cars (which he drove at hair-raising speed through Admiralty Arch), and his recipes for secret ink (including one suggestion that his agents write their reports in semen). There is much in Cumming's logbooks to instruct as well as amuse. They should make it possible, for the first time, to assess the full range of M.I.6's early activities and its relations with government.

The second set of documents mentioned by Andrew was "the history of GC and CS (the predecessor of today's codebreaking and communications intelligence agency, GCHQ), written by Frank Birch." On page 149 of Andrew's book, "Her Majesty's Secret Service," he wrote that, in Kirke's diary, it said that Cumming's (referred to as "C") idea for British intelligence agents to use semen as invisible ink occurred in 1915, which was, in fact, during World War I, as claimed by the Reddit post:

Also on pages 148 and 149, Andrew wrote about an agent named "Dr. Condom," which may have been a codename. "Dr. Condom" and Baron Brault (codenamed "Baudin") served "to provide a channel of communication and payment" for Major Ernest Wallinger's intelligence network. Condom's appearance on the same page as Cumming's semen idea appeared to be a coincidence.

In 2015, the Yale University Press and author Kristie Macrakis published the book, "Prisoners, Lovers, and Spies: The Story of Invisible Ink from Herodotus to al-Qaeda." This was one of the two sources cited for the Wikipedia article that was referenced in the Reddit post. As of 2022, Macrakis was a professor in the School of History and Sociology at Georgia Tech.

On pages 151 and 152, Macrakis titled the last section of chapter seven as, "Stinky Ink." She wrote that the idea for using semen as invisible ink became a bit of an issue:

Her sources were shown in the bibliography. We have reprinted them here for any readers wishing to do further research:

Macrakis also wrote that, at the time, secret messages were written with other "organic sympathetic inks," including vinegar, onion juice, saliva, urine, milk, and other readily available household substances.

'Every Man His Own Stylo'