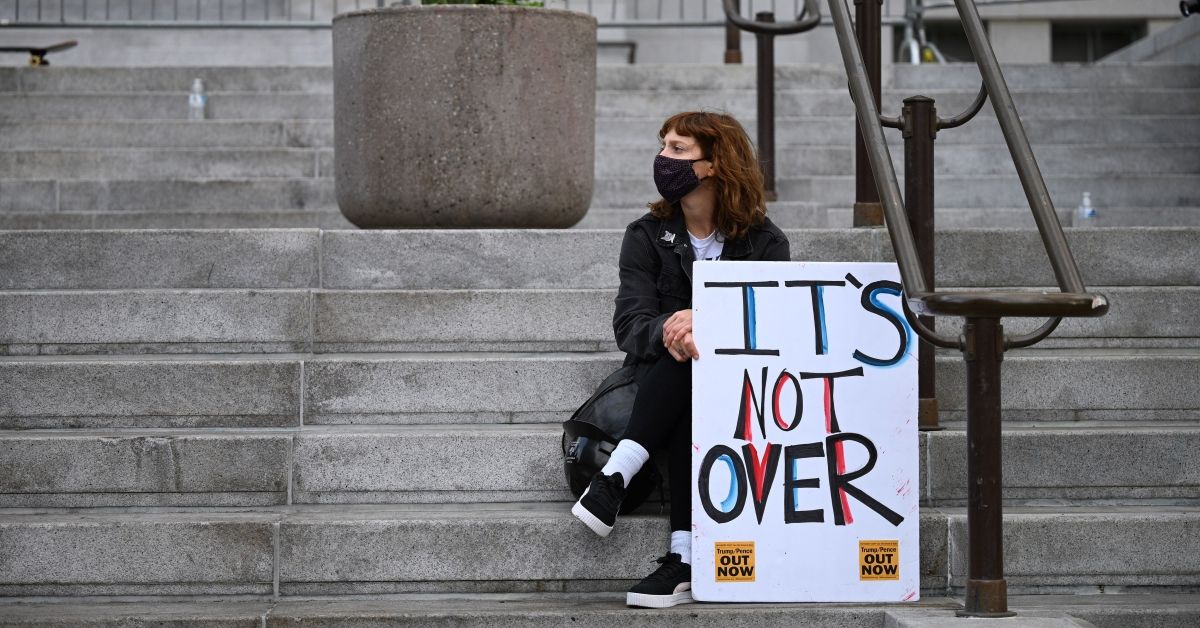 Claim:
As of mid-November, several battleground states had not certified results of the popular vote in the 2020 presidential race, which meant U.S. President Donald Trump had an opportunity to defy the election's outcome.
Rating:

As of mid-November, several battleground states had not certified results of the popular vote in the 2020 presidential race.

It was a false interpretation of the Constitution, federal statutes, and state laws that govern elections to consider the process of certifying results of the popular vote an opportunity to defy what voters want.

While the Trump campaign was attempting to halt or slow down voter certification in several battleground states, the success of those efforts to overturn Biden's victory was unknown, as of this writing.

In mid-November 2020, after U.S. Democrat Joe Biden secured the majority of the country's electoral votes in the presidential race against President Donald Trump, an email from the sitting president's campaign to supporters implied that the country's constitutionally mandated elections process allowed time for Trump to defy the outcome of the popular vote. (Read more fact checks like this one here.)

"Joe Biden has NOT been certified as the winner of any states, let alone any highly contested states headed for mandatory recounts, or any states where our campaign has valid and legitimate legal challenges that could determine the ultimate victor," read a Nov. 13 Trump fundraising email obtained by Snopes. The email alleged that states had not certified results of the 2020 election and Trump's political enemies were wrongfully trying to convince Americans that a Biden presidency was inevitable when it wasn't.

The claim was two-pronged: Key battleground states had not certified results of the popular vote, and because of that Trump had a chance to defy its outcome.

First, let's define what step in the country's election process — which functions under the Constitution, federal statutes, and state laws — to which the campaign was referring.

Every four years in America, people submit ballots in a popular vote for the president. Most states grant counties the authority to administer those elections via a board of electors, an election official or officials, or both.

Those local jurisdictions operate under varying timelines for processing votes. As they begin to publish unofficial voter tallies via secretary of state websites or other government-run databases on election night, statisticians compare the sum of votes counted to the difference in totals between the losing and winning candidate.

When there appears to be no statistical chance for a losing candidate to overcome the competitor in a state, journalists "call" the race and project a winner there. As a result, that candidate receives that state's total number of electoral votes.

In the Trump-Biden contest, the news media did not announce a winner in several states until days after polls closed, in part, due to an unprecedented surge in mail-in voting and states' varying rules for when they can start processing those ballots. See National Public Radio's graphic showing deadlines below, based on data from state elections offices, the National League for State Legislatures, and Ballotpedia: On Nov. 7, however, Biden secured the majority of the country's electoral votes (again, based on unofficial voter tallies), and was announced the 46th President of the United States.

Cue the above-mentioned claim about Trump having a chance at another term and that the election's "ultimate victor" was yet to be decided. The Associated Press reported:

Certifying results is a routine yet important step after local election officials have tallied votes, reviewed procedures, checked to ensure votes were counted correctly and investigated discrepancies. Typically, this certification is done by a local board of elections and then, later, the results are certified at the state level.

But as Trump has refused to concede to Biden and continues to spread false claims of victory, this mundane process is taking on new significance.

Under state and federal laws, the process of cementing voter tallies continues regardless of a candidate's acceptance of the popular vote.

First, local election boards certify ballots at a precinct level. After that, state executive authorities seal state's results via a "Certificate of Ascertainment" — a document that lists the names of the state's chosen electors who will cast official votes for president through the Electoral College. (State legislatures decide how to appoint electors and their necessary qualifications.)

Deadlines for completing certifications vary state by state under local laws. According to MIT Technology Review, such dates for battleground states were:

Once completed, governors submit their "Certificate of Ascertainment" to the U.S. Archivist. The electors listed on the document then meet at state capitals to formally cast their votes for president and vice president on the Monday after the second Wednesday in December, per guidelines outlined in the Constitution. In 2020, that’s Dec. 14.

In other words, it was accurate to state, as of mid-November, several battleground states had not certified results of the popular vote, including Georgia, where the state's Republican secretary of state ordered a manual recount of ballots and Biden led by a slim margin of 0.3 percentage points.

However, less clear was whether that fact meant Trump had a chance to overturn Biden's victory. Via lawsuits and campaign messages to supporters, like the above-displayed fundraising email, the Trump campaign was trying to convince Americans that governments should hold off on certifying ballots because widespread voter fraud tainted the numbers, even though no evidence showed that was true.

Matt Morgan, the Trump campaign’s general counsel, said the push to try to delay or stop voter certification in battleground states aimed to give the campaign more time to get a handle on voter tallies and whether it would have the right to automatic recounts, according to The Associated Press.

Additionally, some Trump allies wanted to slow down the process to give GOP-controlled legislatures an opportunity to pick a slate of electors who would overturn Biden's victory through the Electoral College or send the election to the U.S. House of Representatives. (Read here for how Congress would decide the outcome of the 2020 election, pending what happens with the Electoral College.)

As of this writing, two Republican election officials in Michigan's Wayne County had refused to certify results of the popular vote, citing the unsubstantiated claims of voter fraud, and then reversed course on Nov. 17. GOP officials in Arizona were also trying to pressure county officials to delay the process, per news reports. Simultaneously, Trump allies in Michigan and Nevada pushed lawsuits attempting to stop voter certification.

University of Kentucky Law Professor Joshua Douglas told The Associated Press there was no precedent for such an effort to delay or undermine the typically sleepy step in the country's presidential elections.

“It would be the end of democracy as we know it,” Douglas said. “This is just not a thing that can happen.”

We should note here: The emails from Trump's campaign about states certifying voting results asked supporters to chip in to a so-called "Official Election Defense Fund" or "Election Defense Task Force," both of which the campaign framed as costly initiatives involving ballot recounts or various lawsuits to challenge Biden's win.

In sum, while it was true to claim states had not certified results of the popular vote, the resulting success of the Trump campaign's efforts to intervene in that typically procedural step remained unknown at the time of this writing, and it was erroneous to claim that a winner of the election had not been named. For those reasons, we rate the allegation in the fundraising email a "mixture" of accurate, undetermined, and false information.

Previous Article
Next Article
Article 2 of 12 in Collection