Congress Could Select the President in a Disputed Election

The Founding Fathers meant for Congress – not the courts – to be the backup plan if the Electoral College result was disputed or did not produce a winner. 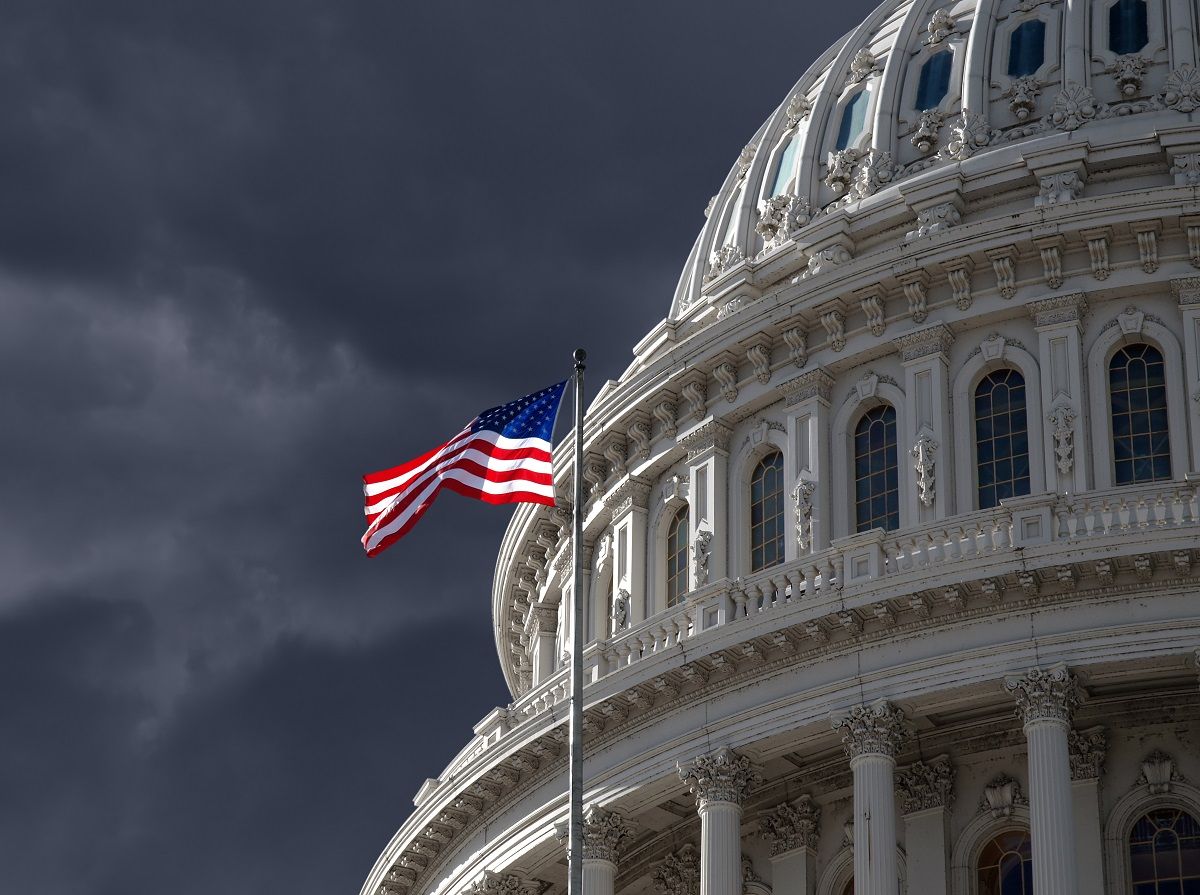 Dark sky over the US Capitol building dome in Washington DC. (Image Via Getty Images)

President Donald Trump’s campaign is challenging results of battleground states with lawsuits, hoping to litigate its way to a win in the 2020 election. But the Founding Fathers meant for Congress – not the courts – to be the backup plan if the Electoral College result was disputed or did not produce a winner.

Generally, the framers sought to avoid congressional involvement in presidential elections. As I’ve taught for two decades in my college course on presidential selection, they wanted an independent executive who could resist ill-considered legislation and would not care about currying favor with members of Congress.

That’s why they created the Electoral College, assigning to state legislatures the responsibility for choosing “electors” who would then determine the president.

But the framers could foresee circumstances – namely, a fragmented race between little-known politicians – where no presidential candidate would secure an Electoral College majority. Reluctantly, they assigned the House of Representatives the responsibility to step in if that happened – presumably because as the institution closest to the people, it could bestow some democratic legitimacy on a contingent election.

The founders proved prescient: The elections of 1800 and 1824 did not produce winners in the Electoral College and were decided by the House. Thomas Jefferson was chosen in 1800 and John Quincy Adams in 1824.

Over time, the development of a two-party system with national nominating conventions – which allows parties to broker coalitions and unite behind a single presidential candidate – has basically ensured that the Electoral College produces a winner. Though the Electoral College has changed significantly since the 18th century, it has mostly kept Congress out of presidential selection.

A tie in the Electoral College is one way the 2020 election could end up with Congress. In the extremely unlikely scenario that both Joe Biden and Donald Trump get 269 electors, the election would be thrown into the House.

A more likely scenario is that the Trump campaign’s litigation winds up getting Congress involved in the 2020 election.

Though courts will decide specific questions of legal interpretation in voting disputes, they do not want to be perceived as deciding the 2020 election result, as the Supreme Court did in 2000. Where possible, judges will decline to hear lawsuits that ask big political questions and leave these issues for the political system to resolve.

Enter Congress. If neither candidate gets to 270 electors due to disputed ballots, the House would have to decide the election.

Though the House has a Democratic majority, such an outcome would almost certainly benefit Trump. Here’s why: In a concession to small states concerned their voices would be marginalized if the House were called upon to choose the president, the founders gave only one vote to each state. House delegations from each state meet to decide how to cast their single vote.

This arrangement favors Republicans. The GOP has dominated the House delegations of 26 states since 2018 – exactly the number required to reach a majority under the rules of House presidential selection. But it’s not the current House that would decide a contested 2020 election; it is the newly elected House, and many Nov. 3 congressional races remain undecided. So far, though, Republicans have retained control of the 26 congressional delegations they currently hold, and Democrats have lost control of two states, Minnesota and Iowa.

Evenly divided delegations count as abstentions, and Republican gains in Minnesota and Iowa are moving these states from Democratic to abstentions. 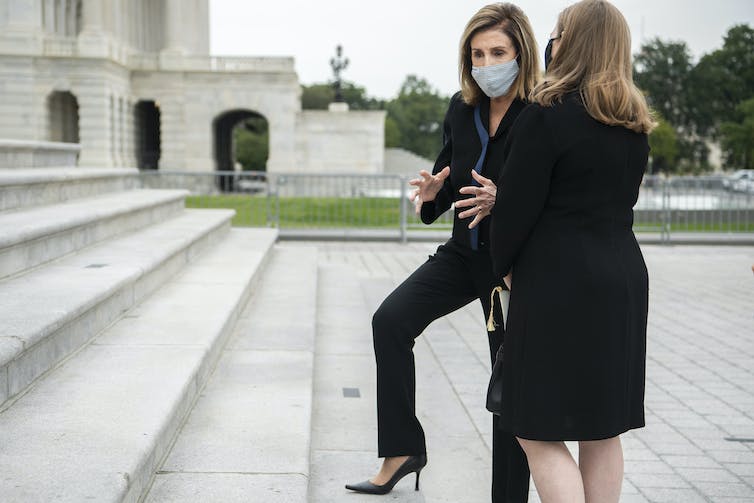 House Majority Leader Nancy Pelosi is reportedly preparing for the possibility that presidential selection ends up in the House.
Tom Williams/CQ-Roll Call, Inc via Getty Images

Perhaps the most relevant precedent for a contested 2020 election that winds up in the House is the 1876 election between Democrat Samuel Tilden and Republican Rutherford B. Hayes. That election saw disputed returns in four states – Florida, South Carolina, Louisiana and Oregon – with a total of 20 electoral votes.

Excluding those 20 disputed electors, Tilden had 184 pledged electors of the 185 needed for victory in the Electoral College; Hayes had 165. Tilden was clearly the front-runner – but Hayes would win if all the contested votes went for him.

As Michael Holt writes in his examination of the 1876 election, the 15-member commission had five House representatives, five senators and five Supreme Court justices. Fourteen of the commissioners had identifiable partisan leanings: seven Democrats and seven Republicans. The 15th member was a justice known for his impartiality.

Hope of a nonpartisan outcome was dashed when the one impartial commissioner resigned and was replaced by a Republican judge. The commission voted along party lines to give all 20 disputed electors to Hayes.

To prevent the Democratic-dominated Senate from derailing Hayes’ single-vote triumph over Tilden by refusing to confirm its decision, Republicans were forced to make a deal: Abandon Reconstruction, their policy of Black political and economic inclusion in the post-Civil War South. This paved the way for Jim Crow segregation.

The 2000 election is the only modern precedent for contested vote returns.

George W. Bush and Al Gore argued for a month over Bush’s slim, 327-vote advantage in Florida’s second machine recount. After a lawsuit in state courts, this political and legal battle was decided by the Supreme Court in December 2000, in Bush v. Gore. 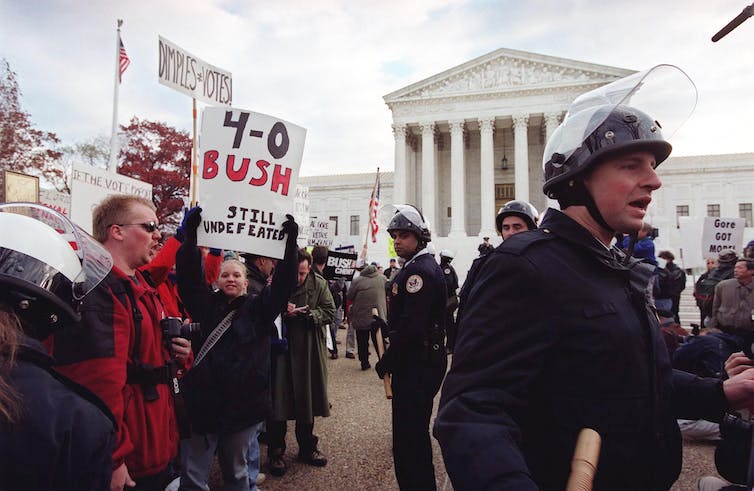 The scene outside the Supreme Court, Dec. 11, 2000.
Shawn Thew/AFP via Getty Images

But Bush v. Gore was never intended to set a precedent. In it, the justices explicitly stated “our consideration is limited to the present circumstances.” Indeed, the court could have concluded that the issues presented were political, not legal, and declined to hear the case.

In that case, the House would have decided the 2000 election. The Electoral College must cast its ballots on the first Monday after the second Wednesday in December. This year, that’s Dec. 14. If disputed state vote totals are not resolved by six days prior to that date, Congress can step in, under the 1887 Electoral Count Act.

This could have happened in 2000, and it is imaginable this year.