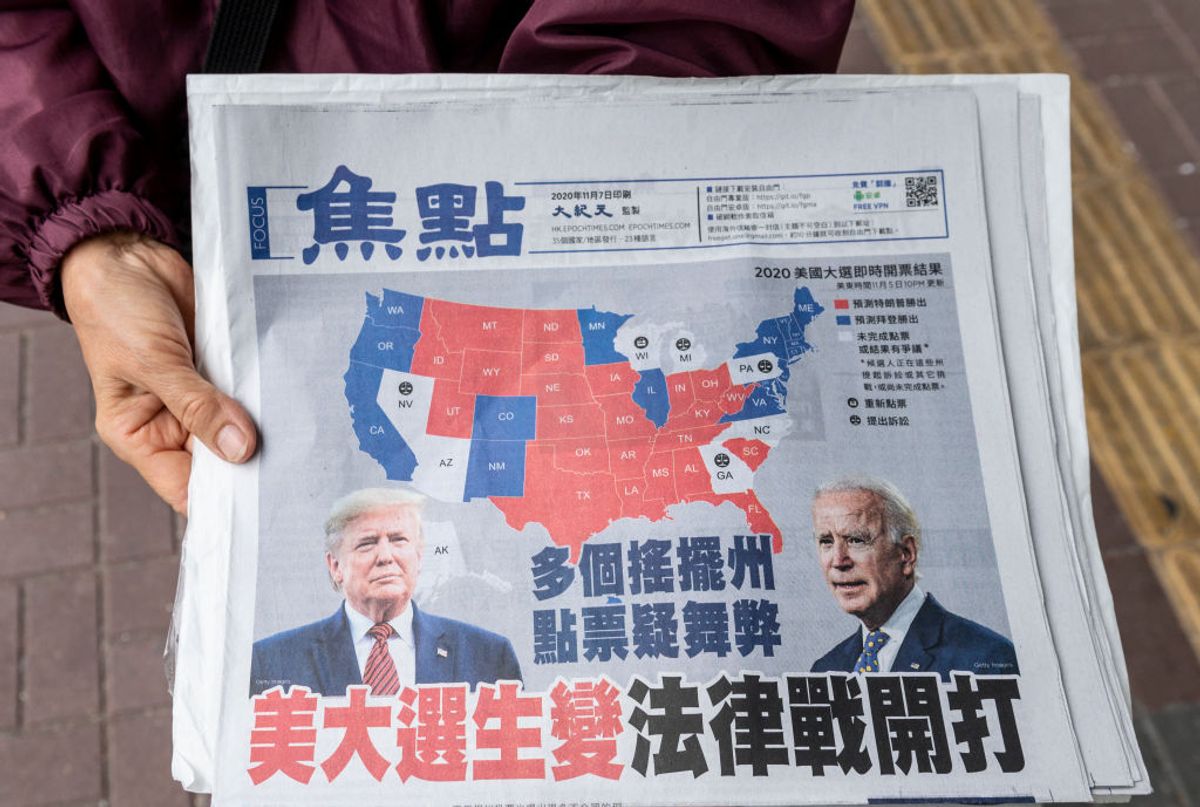 Claim:
As of mid-November 2020, the U.S. presidential election remained "far from over," thus enough uncertainty about the outcome remained that U.S. President Donald Trump could reasonably claim he might still be the winner.
Rating:

Although the results of modern U.S. presidential elections are typically called by the news media on Election Day (or soon after) based on vote tallies reported in real time by local election officials nationwide, said elections are technically unfinished until the Electoral College casts its votes in December and Congress certifies that count in January.

However, it's a misinterpretation of the U.S. Constitution, as well as federal statutes and state laws governing national elections, to regard those post-Election Day procedures -- steps that officially cement Americans' pick for president -- as an opportunity to defy the will of the voters without providing compelling evidence of error or fraud.

In mid-November 2020, after all major news organizations declared former U.S. Vice President Joe Biden the winner of the presidential election, President Donald Trump's campaign claimed in a series of fundraising emails that the election was "far from over," and that supporters should not believe messages to the contrary. (Read more fact checks like this one here.)

In other words, the emails claimed either Biden or Trump could serve as the country's 46th president come Inauguration Day on Jan. 20, 2021 — even though Biden won key battleground states, including Michigan and Pennsylvania, by comfortable vote margins and exceeded the 270 Electoral College votes required to win the presidency. The emails — like the president's tweets that falsely claimed he had won or denied Biden's victory — were part of an aggressive disinformation campaign attempting to attack the integrity of America's democratic process and convince supporters that Trump had a significant chance to serve another term.

"Joe Biden only won in the eyes of the FAKE NEWS MEDIA. I concede NOTHING. We have a long way to go — this was a flawed ELECTION," said a Nov. 19 campaign email obtained by Snopes. To unpack the underlying claim — that American elections provide losing candidates an opportunity to defy the outcome of the popular vote — let's first lay out the country's steps for presidential elections under the Constitution, federal statutes, and state laws.

Every four years, when Americans cast ballots in presidential elections, they are participating in the country’s popular vote.

That happened Nov. 3 in the Trump-Biden race. Days later on Nov. 7, Biden was announced the winner of the popular vote based on the number of votes counted so far compared to the margin of votes between him and Trump in key battleground states. (Read why and how journalists make that determination in presidential races here.)

Typically, at that point in an election, the losing candidate acknowledges defeat by conceding to his opponent and addressing supporters in a speech. But Trump not only did not do that, he and his allies went a step further by spewing the unfounded conspiracy theory that any person or group who acknowledged  Biden's victory was working to undermine the president.

Whether a candidate accepts the outcome of the popular vote or not, state officials at polling sites nationwide continue to count remaining ballots over the course of days or weeks, according to their respective rules.

That process, which historically is a procedural step to cement the outcome of the popular vote, requires governors to prepare what’s called a “Certificate of Ascertainment” that lists their state's slate of electors. For example, Biden won the popular vote in Minnesota, so that's state's certificate would list 10 Democratic electors who pledged to vote for Biden through the Electoral College.

Likewise, if, hypothetically, Trump had won the Midwestern state, the state's certificate would list a different group of 10 people — electors who pledged to vote for the Republican candidate.

All of this said, electors meet at state capitals in early December, weeks after Election Day, to formally cast votes for president and vice president, per guidelines outlined in the Constitution.

No constitutional provision, nor any federal law, requires electors to vote according to the results of the popular vote; however, the majority of states and the District of Columbia have their own laws governing the Electoral College and aim to keep electors from defying the popular vote.

Here are specific deadlines for those above-described steps in presidential elections, per The Associated Press:

Dec. 8 is the deadline for resolving election disputes at the state level. All state recounts and court contests over presidential election results are to be completed by this date.

Dec. 14: Electors vote by paper ballot in their respective states and the District of Columbia. Thirty-three states and D.C. have laws or party regulations requiring electors to vote the same way the popular vote goes in the state, and in some states, electors can even be replaced or subjected to penalties, according to the Congressional Research Service.

Dec. 23: The certificates must be delivered to the designated officials. If they are not delivered, the law provides alternative avenues for getting the results to Washington.

Jan. 6, 2021: The House and Senate hold a joint session to count the electoral votes. If one ticket has received 270 or more electoral votes, the president of the Senate, currently Vice President Mike Pence, announces the results.

But it's a false interpretation of state and federal laws governing presidential elections to consider those continuing steps after polls close on Election Day — when states certify results or choose electors, or the Electoral College votes for president — as opportunities to defy the popular vote.

Per analysis of the guidelines by constitutional experts and election academics, the post-election day procedures mainly serve to cement what voters decided at the county and state level.

We should note here: The emails from Trump's campaign alleging the election was "far from over" asked supporters to chip in to a so-called "Official Election Defense Fund" or "Election Defense Task Force," both of which the campaign framed as costly initiatives involving ballot recounts or various lawsuits to challenge Biden's win.

But according to Brendan Fischer, director of the federal reform program at Campaign Legal Center, the average donor's money was not covering those expenses.

In sum, it was accurate to claim the 2020 presidential election was incomplete as of mid-November. However, it was false to categorize the remaining procedures as reasonable opportunities for Trump to overturn Biden's victory. For those reasons, we rate this claim "Mostly False."

Previous Article
Next Article
Article 1 of 12 in Collection