Does a Coin Found in a Car Door Handle Mean Something?

We looked at the origins of an online advertisement that showed a strange picture of a coin wedged into a car door handle. 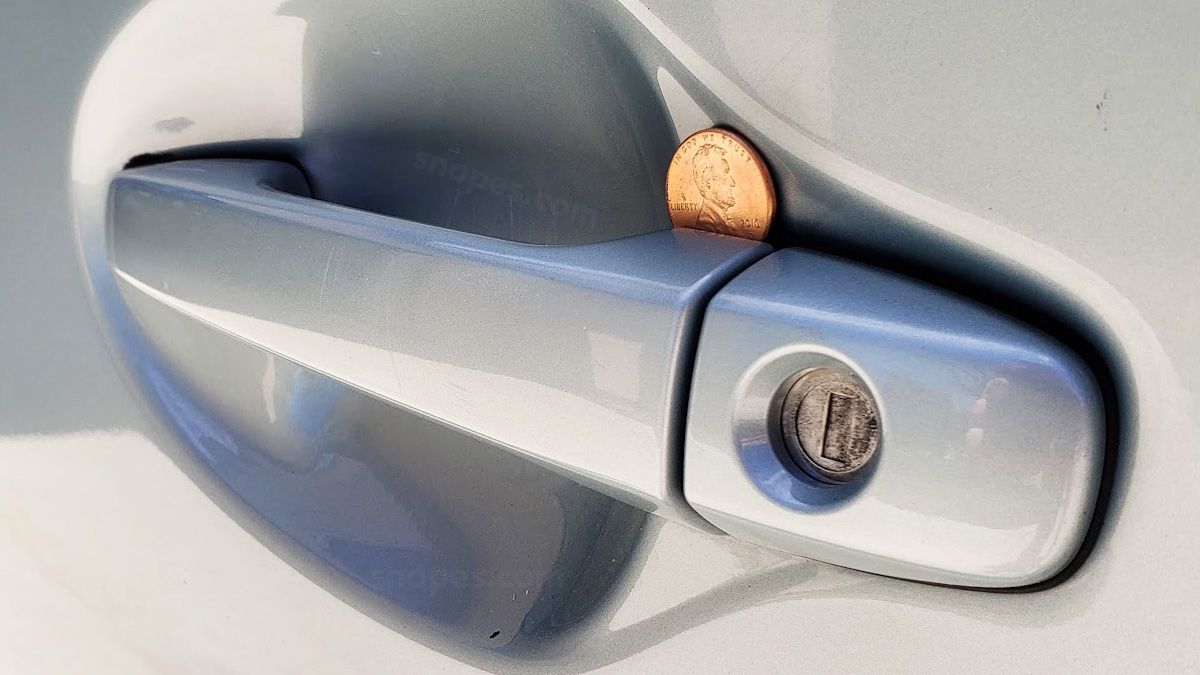 An online ad claimed If You See a Coin in Your Car Door Handle, Here's What It Means. (Image Via Snopes.com)

Claim:
An online advertisement correctly revealed what it means when a coin is found in a car door handle.
Rating:

A clickbait ad showed a picture of a coin wedged into a car door handle. Clicking the ad led us to a 51-page slideshow article that never mentioned anything about the subject. No explanation was provided because coins weren't being wedged into car door handles at all. The idea for the misleading ad appeared to be spun out of a years-old, debunked urban legend that said criminals were using coins to more easily break into vehicles.

"If You See a Coin in Your Car Door Handle, Here's What It Means." This was the way an advertisement was displayed online in early June 2022. However, this was nothing but misleading clickbait.

The ad, which was hosted by the RevContent advertising platform, showed a picture of a coin wedged into a car door handle. This clickbait ad led to a 51-page slideshow article that never once mentioned anything about wedging a coin in a car door handle.

We clicked the ad that promised to reveal why a coin might be found wedged into a car door handle. The ad led to a 51-page slideshow article that was hosted on both Definition.org and YourBump.com. The headline on both articles read, "These Car Hacks are Huge Lifesavers."

What followed this introduction were 50 additional pages of "car hacks" that supposedly might serve as helpful tips for some drivers. We clicked through all of the pages. The word "coin" was never mentioned even once.

One of the "car hack" pages mentioned "loose change," but had nothing to do with the meaning behind a coin in a car door handle. The page read: "Pick up some silicone cupcake wrappers and slip them into your car's cupholders. They'll keep all that loose change organized, and are easy to remove and clean, keeping the cup holders pristine."

Car doors were mentioned in the lengthy slideshow article. However, again, nothing was mentioned about why a coin might be found in a car door handle. One of the pages said to "cut a pool noodle in half" and to stick the pool noodle on a wall in the garage to prevent damage when opening the car door. Another one advised to use hand sanitizer to de-ice car door keyholes, which was also mentioned by a Ford car dealership in Michigan.

Nothing But an Urban Legend

All of this talk about coins and car door handles might feel a bit familiar to some of our longtime readers. There's a reason for that.

In 2016, we published a fact check about a similar rumor. It claimed that criminals were wedging coins in car door handles as a way of breaking into vehicles. The rumor had been making the rounds on Facebook and perhaps other social media platforms since at least 2015.

In the end, we found that this was nothing more than a baseless bit of scarelore that wasn't anything to worry about. We previously covered a number of other false rumors that also involved objects being attached or placed on cars. As for coins, we even once found a strange ad about placing some loose change in a hotel bathroom sink.

In sum, no, the ad did not reveal anything about the meaning behind a coin being wedged into a car door handle. The misleading clickbait appeared to stem from an old and debunked urban legend.