We reached out to a company spokesperson to ask about this very bad idea that was advertised as a "simple trick to lower car fuel consumption by 55%." 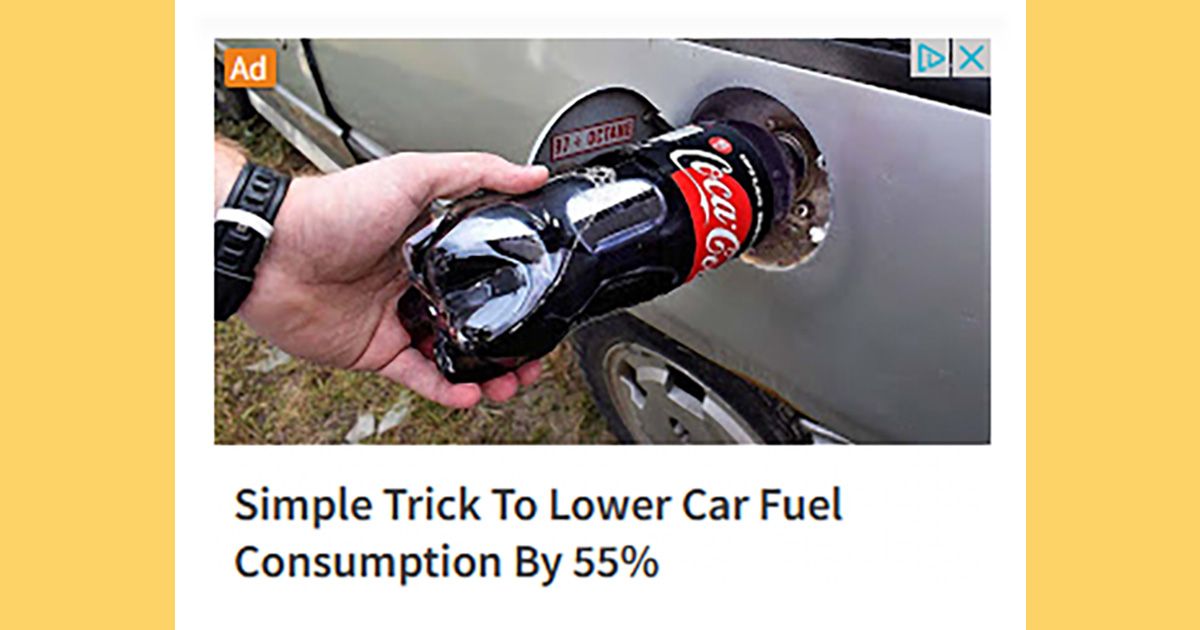 In May 2022, Twitter and Reddit users began to report seeing online ads for a product named EcoPlus that appeared to show Coca-Cola, better known as Coke, being poured into a car's gas tank to be used as fuel. "Simple Trick To Lower Car Fuel Consumption By 55%," it read. We clicked one of the ads. It led to a page that advertised the EcoPlus product. However, the page mentioned nothing of pouring a soft drink into an automobile's gas tank. It was misleading clickbait.

We reached out to EcoPlus to ask about the scammy ads. By email, a spokesperson for the company said, "I apologize, the ad is not ours, and Coca-Cola is not related to our product." The company described EcoPlus as "a chip tuning box that can be plugged into the OBD2 connector of your car to reduce fuel consumption." We also asked additional questions after receiving their initial response and will update this story should we receive further answers.

Off the top, we strongly advise against putting anything in a car's fuel tank other than gasoline. According to Carscoops.com, putting Coke into a gas tank can "ruin your car."

A simple Twitter search for "Coke" and "gas tank" showed several recent results with users making light of the strange ads for EcoPlus:

One reader emailed us to report seeing a similar ad with Fanta, also a Coca-Cola product, being poured into a gas tank.

Other Twitter users reported seeing the ads with the Coke bottle on FoxNews.com and Reuters.com. Publishers have the ability to select ad categories and block others, but they do not pick and choose specific advertisements to run on their websites. In other words, FoxNews.com and Reuters.com did not handpick the misleading ad that showed Coke being poured into the car's gas tank to be used as fuel. (We blocked these ads from appearing on Snopes.com and will continue to block any future iterations that pop up.)

In our research, we found that EcoDriver (sometimes labeled as "EcoDrive") and EcoChip were two other product names that also had a history of strange ads. According to planetofreviews.com, EcoPlus was just the latest name for the same product, as its name kept changing, beginning with EcoFuel. We asked the company if this was true about the product name changes, but did not receive an answer before publishing this story.

Toothpaste and Dishwasher Tablets, Too?

The German-language YouTube channel Moschuss published a video that showed an ad for EcoDriver in which Colgate toothpaste was being squeezed into a car's gas tank. It read, "1 einfacher Trick zur Senkung des Kraftsoffverbrauchs von Autos um 55 %."

This translated to, "1 Simple Trick To Reduce Car Fuel Consumption By 55%."

In the video, Moschuss also showed the Coke ad with the gas tank: "Menschen in Deutschland entdecken ein Gerät zur Senkung des Kraftstoffverbrauchs um 55 %." It translated to, "People In Germany Discover A Device That Cuts Fuel Consumption By 55%."

There was even an ad with a dishwasher tablet being held up to a gas tank, which said that a new way to save fuel was "taking Australia by storm." It read like this in German: "Geld Sparen Beim Kraftstoff. Eine Geheime Methode, Um Beim Tanken Geld Zu Sparen, Erobert Australien Im Sturm." We strongly advise against placing anything but gasoline into a car's petrol tank.

The video from Moschuss also showed Heinz Tomato Ketchup being poured into a car's gas tank in an ad for EcoDriver. Twitter users reported seeing an ad for EcoChip that showed the same picture of ketchup and a fuel tank:

One of the users even came up with a song for the weird ad:

at the pillar there is little quarreling,

only the workshop finds the whole thing strange.

The driver is an idiot, señor...

The website TireMeetsRoad.com published a warning about the ketchup ad, saying: "Please don't put ketchup in your gas tank."

Common phrasing used in these ads included the following: "Secret Way to Save On Fuel," "Do This To Save Money On Fuel," and "1 Simple Trick To Lower Car Fuel Consumption By 55%." It's unclear just how long they had been displayed online.

In sum, the ads that showed gas tanks being filled with Coke, toothpaste, dishwasher tablets, and ketchup were nothing more than misleading clickbait for EcoFuel, EcoDriver, EcoChip, EcoPlus, and potentially other product names. We recommend avoiding this misleading clickbait and instead enjoy reading through our catalog of what we call "Cokelore," including several old rumors about The Coca-Cola Company.