Does this Photo Authentically Show a Whale Alongside a Boat?

Blue whales are believed to be the largest animals to have ever lived. 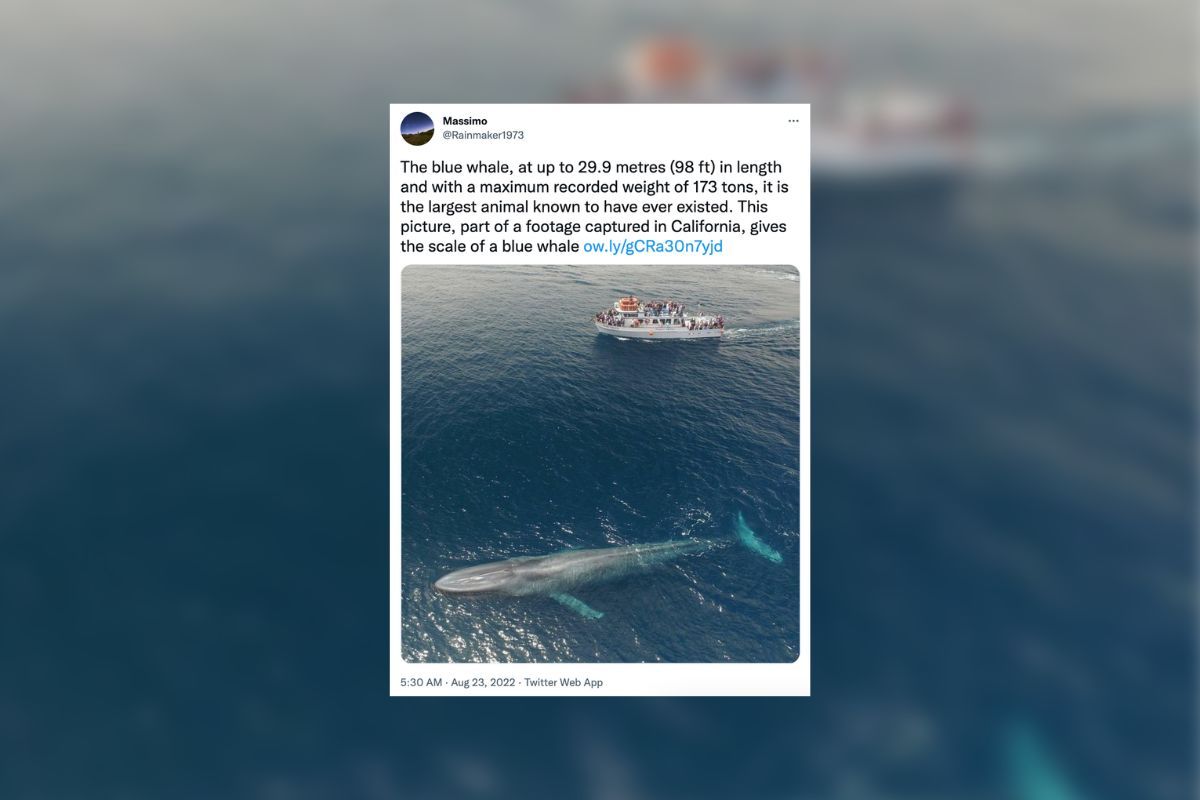 Claim:
A photograph authentically compares the size of a blue whale with that of a boat.
Rating:

A photograph shared to Twitter on Aug. 23, 2022, by the science account Massimo claimed to show an enormous blue whale estimated to be nearly 100 feet long located near a boat.

The Twitter poster identified the cetacean as a blue whale, an enormous migratory species found in all oceans except the Arctic. A link included in the tweet directed us to an article written by the British tabloid paper The Daily Mail and published in August 2018. A video included in the article was titled, “Giant blue whale swims next to boat full of shocked tourists.” The video caption read:

Video: It's NOT a small world after all! Mind-boggling scaled images reveal the true size of different objects and animals that always appear MUCH tinier

Amazing drone footage of a giant blue whale swimming off the coast of California, USA.

At the bottom left-hand corner of the video frame is a logo for the video syndicate Newsflare, which reported that the video was filmed off Newport Beach, California, on July 3, 2016. A caption for this video read:

Amazing drone footage from the Newsflare archive of a blue whale swimming beside a tourist boat off the coast of California, USA.

The video, filmed off Newport beach in 2016, shows the massive mammal shooting water out of its blowhole while tourists watch.

"The blue whale is estimated to be about 90ft in length."

We have no reason to believe that this video has been fabricated or altered.

“Females are bigger than males. The lengthiest blue whales are 110 feet, but they are more commonly between 70 and 80 feet. Adult blue whales weigh up to 150 tons, which makes them the largest animals to ever live,” wrote the National Wildlife Federation. “By comparison, elephants — the largest terrestrial animals — weigh only 4.5 tons."

Whale and Dolphin Conservation adds that female blue whales are known for several records set during the 20th century. The longest blue whale on record was a female measured in 1909 at a whaling station in the South Atlantic: she measured slightly over 110 feet long (33.58 meters). The heaviest blue whale was also a female hunted in 1947, weighing 418,878 pounds (190 tonnes) — about 30 elephants or 2,500 humans.

Their massive proportions are spurred by tiny shrimp-like marine organisms called krill. Blue whales use baleen plates to feed on their tiny prey, sometimes eating over 7,700 pounds each day.

We should note that there is a chance the drone footage that captured the whale could have made it look somewhat larger due to a phenomenon known as forced perspective. This occurs when foreground objects, such as the whale, appear larger in the frame while distant objects, like the boat, appear much smaller.

We’d also like to point out that the photograph shared to Twitter shows a different angle of the boat and whale than does the Newsflare video, instead showing the whale on the bottom left frame of the picture rather than the bottom right. It is likely that this is simply because the picture was taken from a longer version of the video, which "CBS Mornings" also aired during a broadcast in 2016:

Regardless, because blue whales are known to reach lengths over 100 feet, and because the photograph posted to Twitter appears to be taken from an authentic Newsflare video, we believe this picture to be authentic. A size comparison between the boat and the whale in both the video and the photograph appear to show the vessel as about three-quarters of the size of the cetacean, as the Newsflare video noted.

That’s not to say the Snopes newsroom hasn’t come across fantastically photoshopped images of blue whales. Back in 2018, a viral photograph falsely claimed to show a blue whale spotted near Jeanette's Pier in North Carolina. (It was a composite of at least two different images.) Our fact-checkers also came across this false image claiming to show a blue whale “dwarfing a rowboat” that it was swimming underneath. Then, there was this digitally edited photograph that claimed to show two whales beneath Samuel De Champlain Bridge in Quebec, Canada. Similarly, this photograph was also a digital composite of at least two different images.

“Are Orcas Not Whales But Dolphins?” Snopes.Com, https://www.snopes.com/fact-check/orcas-are-dolphins-not-whales/. Accessed 23 Aug. 2022.

“Is This a Photo of Two Whales Beneath the Samuel De Champlain Bridge?” Snopes.Com, https://www.snopes.com/fact-check/whales-samuel-de-champlain-bridge/. Accessed 23 Aug. 2022.