Does This Photograph Show a Huge Blue Whale Under a Rowboat?

An image showing a blue whale dwarfing a rowboat under which it appears to be swimming is actually a piece of digital artwork. 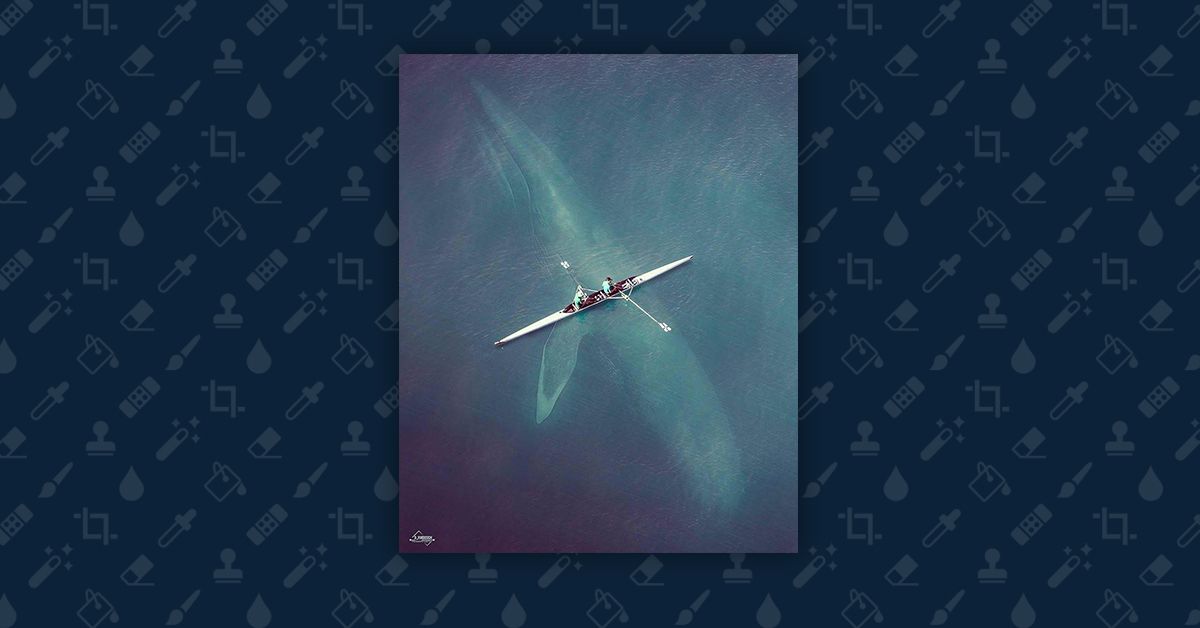 Claim:
A photograph shows a blue whale swimming beneath a row boat.
Rating:

In July 2017, an image showing a large blue whale swimming underneath a row boat appeared on social media, along with the claim that it is a genuine photograph:

WOOHOO!❤??? This is absolutely a stunning arial view of this Blue Whale going underneath this longated rowing boat!??

Some versions of this image, such as a Reddit posting on 9 August 2017, blocked out the watermark in an apparent attempt to avoid copyright infringement, or to make it more difficult to locate the source of the photograph, and in turn more difficult to determine that it was digitally manipulated: The original photograph featured a watermark reading "d_fordesign," the Instagram handle of Dimitris Glouftsis, a photographer and graphic designer with a reputation for sharing surreal images. Dimitris originally shared this image on his Instagram page on 3 July 2017, along with several hashtags indicating that this image had been taken with a drone. However, he admitted in the comments section that this picture had indeed been digitally altered: The photographer also revealed in a September 2016 interview with Greek magazine Lifo that most of his images were created with photoshop and Lightroom:

"My main tool I use to create my pictures are, of course, iMac and Photoshop. Through various tutorials on the internet, books and articles on photography, but also a lot of personal practice, I began to discover new ways and techniques of processing and improving my image quality over the years. I also started using Lightroom to improve the shadowing in my pictures."

The image of the two people in the row boat was taken from a photograph posted by Jens Herrndorff on the web site Unsplash.

The image is reminiscent of other doctored pictures we have covered in the past, such as this image of a whale beneath a surfer, this image of fishermen dangerously close to a pod of breaching whales, or these images (possibly promotional shots for the movie In the Heart of the Sea) showing enormous whales swimming beneath boats.