Why Do the Bidens Look Giant in Photo With Carters?

This photograph spurred jokes about dollhouses and ventriloquists. 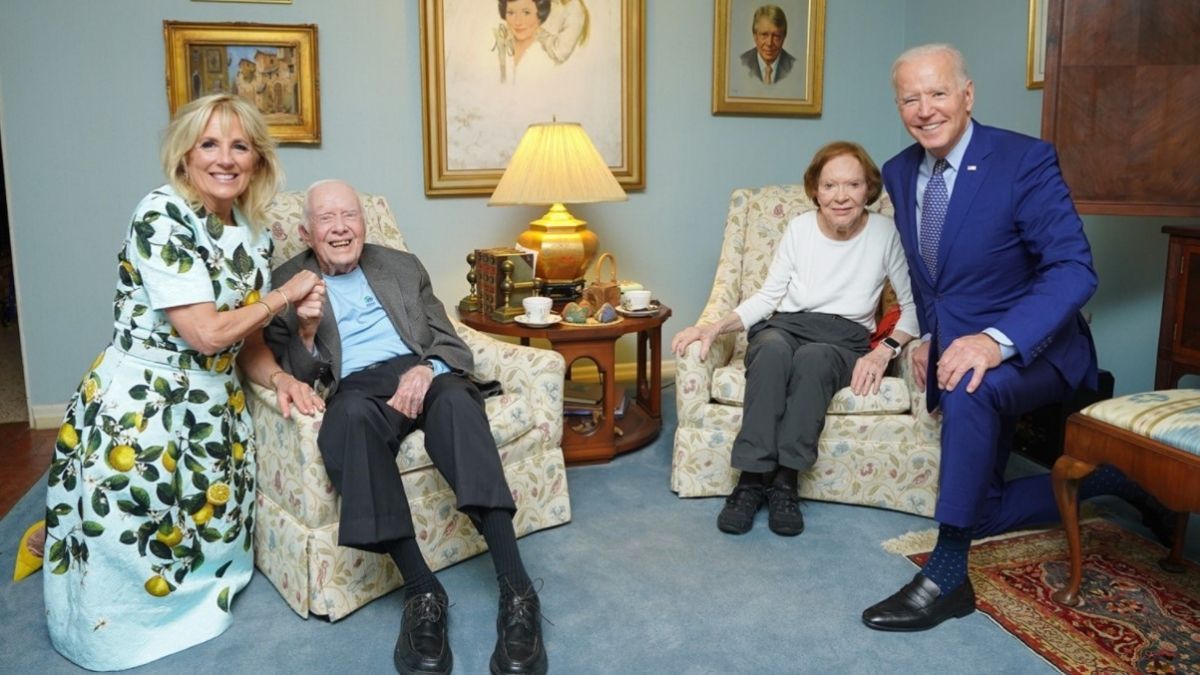 On May 3, 2021, a photograph supposedly showing U.S. President Joe Biden and first lady Jill Biden during a visit with former President Jimmy Carter and former first lady Rosalynn Carter went viral on social media. While some appreciated the photo as it showed the current and former occupants of the White House, others shared it because the perspective made the Bidens look giant compared to the Carters.

But if the photo is genuine, why does it look a little strange?

As far as we can tell, there are three things at play here.

When Carter was running for president in 1976, it was reported that he was 5 feet, 10 inches tall. Biden, on the other hand, is reportedly 2 inches taller, at 6 feet. If we compare the first ladies' sizes, too, we see that Jill Biden is reportedly an inch taller than Rosalynn Carter (5 feet, 6 inches compared to 5 feet, 5 inches). It's also important to note that our source for Carter's height dates from 1976, when he was about 52. As people tend to lose an inch or two as they age, Carter, now 96, is likely an inch or two shorter than listed.

The posture of the four pictured people is also playing into this odd optical illusion. Both of the Carters are sitting, and Jimmy Carter, for example, is slightly slouched in his chair. The size difference probably wouldn't seem so apparent if he was sitting up straight.

Lastly, there seems to be some accidentally forced perspective at play here. Forced perspective is an optical illusion that is based on the fact that objects look bigger when they are closer to the camera. This sometimes crops up as a sort of photographic trickery that has been used to create pictures shared on social media of allegedly "giant" frogs, squirrels, or any other small object that can be deceptively placed closer to the camera than the viewer might anticipate. In this case, we see two unusually large Bidens.

This effect is more apparent with President Biden than first lady Jill Biden. Joe Biden is kneeling slightly ahead of Rosalynn's chair and his shoulders appear to be (in our estimation) at least a foot ahead of the former first lady's, which makes him look unusually large in the frame. This "optical illusion" also appears to be exaggerated by the distortion of a wide angle lens.

A tips and tricks article on how to shoot forced perspective photos from ehabphotography.com explains (emphasis ours):

A wide-angle lens exaggerates perspective, whereas a telephoto lens compresses it. When using a wide-angle lens, you’ll often be positioned very close to your subject. This makes foreground objects appear very large in the frame, and distant objects very small. For example, a slight movement of the camera, even one step forward, backward, left or right, can change the look and size of the objects close to you. Distant objects, however, are not affected. When taking pictures, keep in mind that subtle changes in camera angle and position can affect your image. Wide-angle lenses also exaggerate the distance between objects, making subjects at moderate and far distances seem further away than they really are.

While a wide-angle lens may not be the best option to get an accurate representation of scale, it would allow the photographer to get all four people in the same picture while standing relatively close to them. We reached out to the Carter Center to confirm that a wide-angle lens was used in this photo, and we will update this article if more information becomes available.

In short, while the perspective in this picture may look a little odd, this is a genuine photograph of the Carters and the Bidens.