Did an 'Antiques Roadshow' Appraiser Flip a Lion Statue? 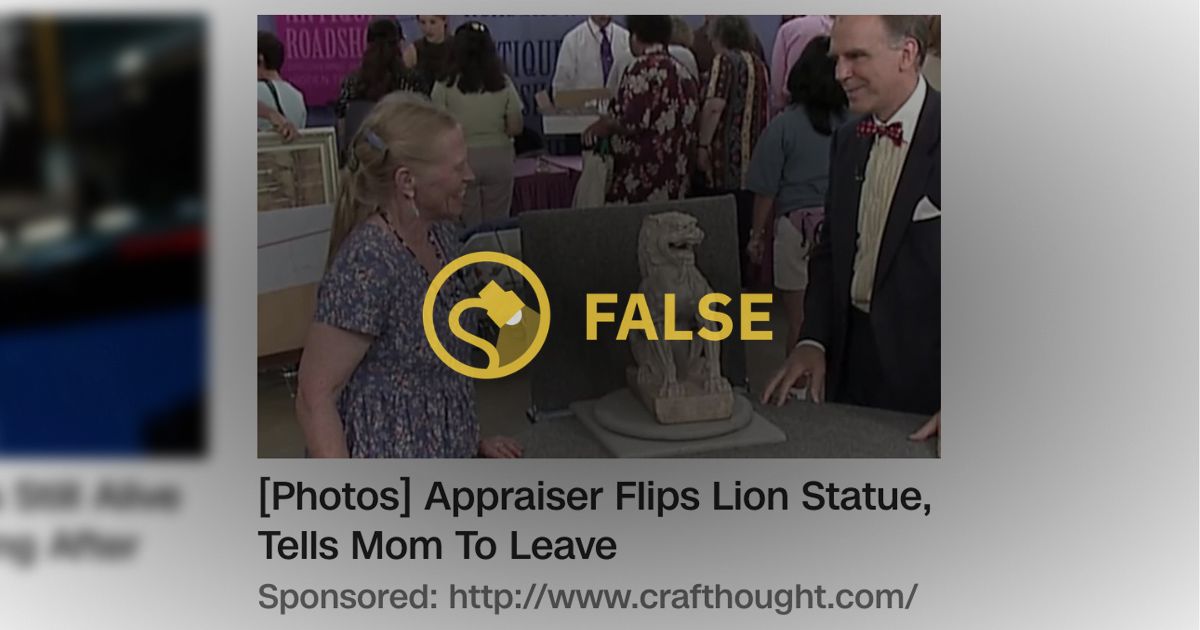 This ad was nothing more than false and misleading clickbait. (Image Via Outbrain Ad on CNN.com)

Claim:
An "Antiques Roadshow" appraiser flipped a lion statue and told a mom to leave.
Rating:

In February 2022, the Outbrain advertising network hosted a misleading ad with a picture from an episode of "Antiques Roadshow" that read: "Appraiser Flips Lion Statue, Tells Mom To Leave." It falsely claimed that an appraiser on the "hidden treasures" show mistreated an item and told a mother to leave.

The "lion statue" ad was likely displayed on at least a handful of websites. For example, it appeared for some users under a popular video about Joe Rogan on CNN.com.

To be clear, as we previously reported, CNN and other websites that run Outbrain ads don't hand-pick individual ads. Thousands of new ads are activated on Outbrain each day. Publishers like CNN have the ability to select ad categories and block others, but they do not pick and choose specific advertisements to run on their websites.

Anyone who clicked the false "lion statue" ad was led to an exhausting 40-page slideshow article on crafthought.com. None of the 40 pages mentioned anything about an "Antiques Roadshow" appraiser flipping over a lion statue or telling a mom to leave because none of that ever happened.

The real story about the picture in the ad and the lion statue was available on the "Antiques Roadshow" website and YouTube channel. The marble lion statue was originally appraised in 2002 by Lark E. Mason at an event in Albuquerque, New Mexico. Mason handled it with care and became emotional at the sight of what he called a "beautiful" and "stunning" work of art that was created by a "master":

"This dates from the golden period of Chinese art, which is called the Tang Dynasty between the sixth century and the ninth century," Mason told the owner. "I would feel pretty confident that one could get between $120,000 and $180,000."

In sum, no, an appraiser on "Antiques Roadshow" did not flip over a lion statue and tell a mom to leave, as an online ad said. The ad was clickbait, plain and simple.