These were the sightings of swastikas and other symbols of hate at "Freedom Convoy" protests in Canada alluded to by Prime Minister Justin Trudeau. 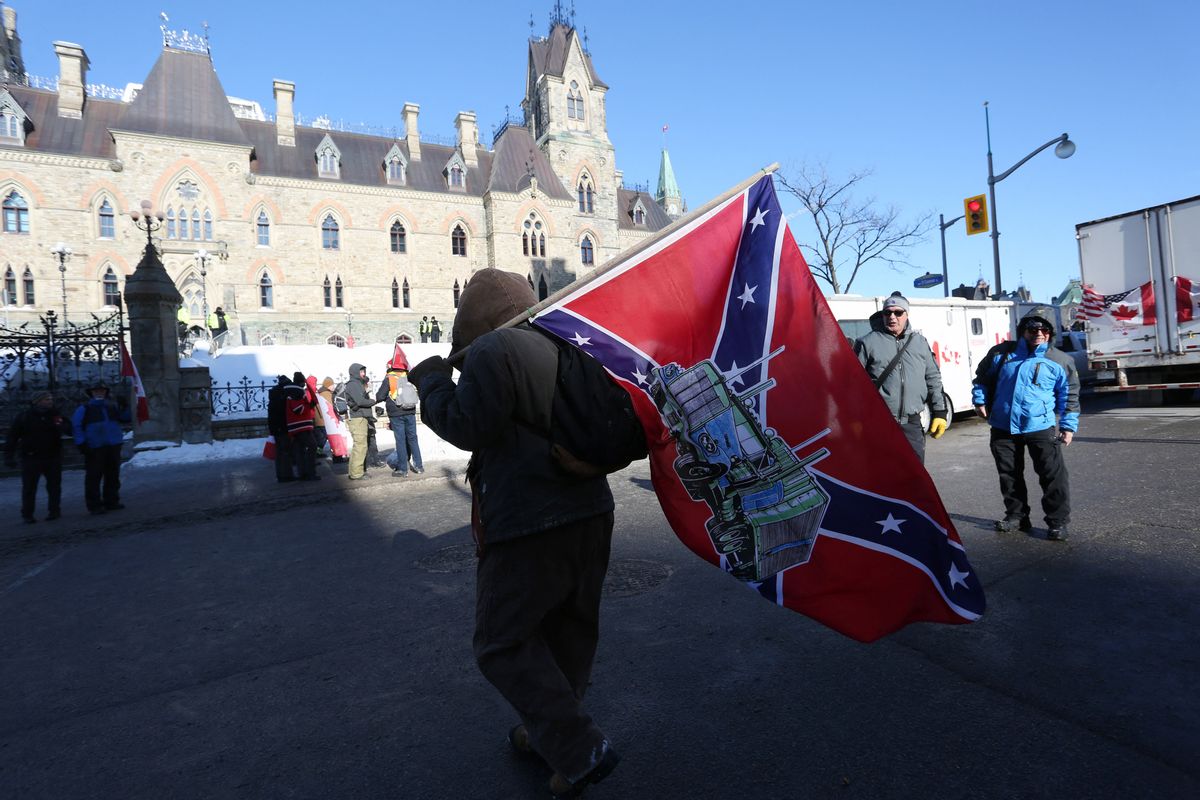 On Feb. 16, 2022, Canadian Prime Minister Justin Trudeau spoke in the House of Commons and said that conservatives in the country were supporting "Freedom Convoy" truckers and protesters who displayed swastikas and Confederate flags.

The Globe and Mail reported that the comment was directed toward "Conservative MP Melissa Lantsman, who is Jewish." It also published that "the comments prompted an uproar in the House of Commons, with some MPs calling for Mr. Trudeau to apologize." The prime minister was rebuked for his comments by Speaker Anthony Rota.

The remarks came during protests by a "Freedom Convoy" whose purpose, according to The Associated Press, was to "rail against COVID-19 restrictions," and against Trudeau himself. That protest included "a blockade of pickups, cars, and a handful of commercial trucks" that ended up "choking off traffic at the Ambassador Bridge, the busiest border crossing between Canada and the United States." Other crossings were also impacted as well as downtown streets in Canada's capital of Ottawa.

We found that a small number of swastikas and Confederate battle flags were indeed displayed by a few "Freedom Convoy" protesters. Most of the swastikas and other symbols appeared to be pictured on signs as a way of mocking and protesting government restrictions. According to photographs, at least one man carried a full Nazi flag. We looked into the incidents of symbols of hate being sighted in Canada and documented them for this report.

First, on Jan. 29, David Cochrane, a senior Parliamentary reporter for CBC News who is based in Ottawa, tweeted this picture that appeared to show a protester comparing COVID-19 vaccine mandates to tactics carried out in Nazi Germany:

Under the Nazi regime, millions of Jews, Soviet civilians, Soviet prisoners of war, non-Jewish Polish civilians, Catholics, and people of multiple other backgrounds were imprisoned and murdered in acts of genocide (mass extermination), whether by gunfire, starvation, gas chambers, ovens, disease, mutilation, or other means.

On Jan. 30, CBC News reported that a swastika was spotted on an upside-down Canadian flag behind a politician as he gave an interview: This again appeared to be a protester voicing the opinion that government restrictions pertaining to the COVID-19 pandemic were comparable to the atrocities of the Holocaust:

An Alberta MP said he was not aware a person was flying an upside-down Canadian flag with a swastika on it behind him when he gave a television interview at a protest in Ottawa on the weekend.

Michael Cooper, the Conservative MP for St. Albert-Edmonton, was giving an interview to CBC TV on Saturday afternoon when a person holding the flag walked behind him. A photo of Cooper in proximity to the flag circulated online.

Afterward, Cooper put out a statement condemning the person, saying he wasn't aware of the symbol. "Naziism [sic] is the purest form of evil and I have always condemned it completely," he said. "Whoever flew this flag is personally responsible for that reprehensible decision and should be eternally ashamed of him or herself."

A Nazi flag was carried by another "Freedom Convoy" protester near others who waved "Fuck Trudeau" flags, according to pictures posted to Twitter by freelance investigative journalist Justin Ling and Member of Parliament Charlie Angus:

Ling also tweeted a picture of protesters holding a sign with a vaccine syringe that had the words "Assassin" and "Trudeau," with "SS" capitalized twice in the word "Assassin." This was a reference to the SS, or Schutzstaffel, in Nazi Germany, described by Brittanica.com as "the black-uniformed elite corps and self-described 'political soldiers' of the Nazi Party."

Confederate battle flags have been reported as being displayed during some of the protests, as reported by The Times of Israel. The Independent also published data on the matter. The number of Confederate flags waved by participants in the protests was unclear:

Photos from the protest show Nazi imagery such as swastikas and SS symbols intended as a criticism of what is seen as tyrannical overreach by the Trudeau government by some of the protesters. In some incidences, these were inscribed on upside-down Canadian flags — a traditional way of signaling protest, danger, or distress relating to a nation.

More confusing was the presence of confederate flags from the US civil war being raised above the throng. Commonly associated with racism, slavery, segregation, and white supremacist views, its presence in the Canadian capital is perhaps more jarring even than its appearance in the January 6 storming of the US Capitol by pro-Trump rioters.

At least one Trump 2024 flag was also spotted in the crowd.

In addition to displaying swastikas and Confederate battle flags, The Associated Press reported that some "Freedom Convoy" protesters had been involved in acts that were under investigation by local police. As Angus also alluded to in his tweet, those acts included anti-vaccine protesters having "urinated on the National War Memorial, danced on the Tomb of the Unknown Soldier, and used the statue of Canadian hero Terry Fox to display an anti-vaccine statement."

We contacted the USC Shoah Foundation and the United States Holocaust Memorial Museum for their reaction to the news of the sighting of swastikas and the Nazi flag at the "Freedom Convoy" in Canada. We will update this story if we receive a response or statement.