The vast majority of truck drivers in Canada are vaccinated. 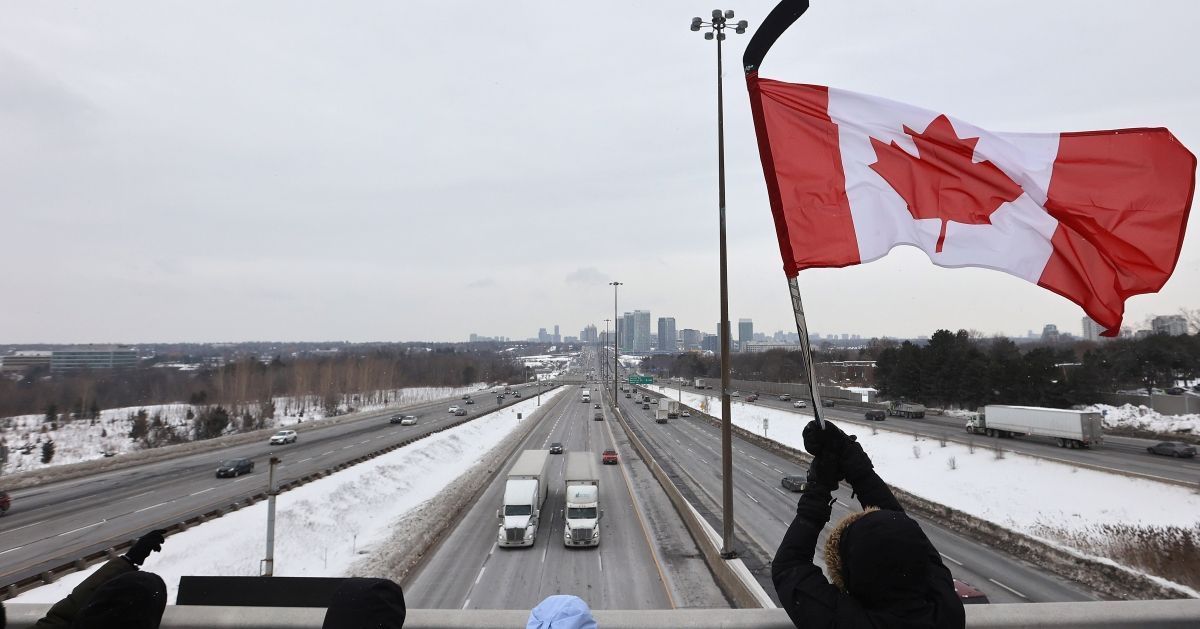 In January 2022, a number of trucks participated in a convoy across Canada in protest of the country's requirement for cross-border truckers to be vaccinated for COVID-19. As videos of the so-called "freedom convoy" spread on social media, so did a number of claims concerning just how many trucks were participating in this event. These claims ranged from a few hundred to more than 50,000. Some even claimed that the freedom convoy had set a Guinness World Record for the world's largest truck convoy. As of this writing, the freedom convoy has not earned a place in the Guinness World Records book. Furthermore, the claim that this convoy involved 50,000 trucks appears to be a gross exaggeration that goes against all available evidence.

The largest truck convoy on record was set in November 2020 in Cairo, Egypt. That convoy involved 480 trucks and stretched 7.5 km (4.6 miles). Guinness writes:

The largest parade of trucks consisted of 480 trucks and is achieved by Tahya Misr Fund (Egypt), in Cairo, Egypt, on 20 November 2020.

With a length of 7.5 km, Tahya Misr Fund was able to organize a parade of 480 trucks, amid the harsh weather and heavy rain, breaking the Guinness World Records title for the largest parade of trucks, which was achieved 16 years ago in the Netherlands with a parade size of 416 trucks, thus the Tahya Misr Fund became the ne record holder.

This Guinness World Records entry provides a data point that makes us skeptical of the 50,000 truck claim. If a 500 truck convoy stretched 7.5 km, a 50,000 truck convoy would stretch 750 km (about 460 miles). We have seen no evidence to support the idea that the freedom convoy is anywhere near 460 miles long.

So just how many trucks participated in this freedom convoy?

There's no official count for the number of trucks participating in this convoy. Estimates are also difficult because this big rig convoy also includes a number of cars and other smaller vehicles. Furthermore, the "freedom convoy" has been a multiple-day event and some trucks may only be participating for a portion of the journey.

These variables make it difficult to estimate just how many trucks are participating. We reached out to the Canadian Trucking Alliance for more information and we will update this article if more information is made available.

Many Canadian news outlets have used the word "hundreds" to quantify the number of trucks in this convoy. The CBC, for example, reported: "Hundreds of truckers set off from British Columbia to Ottawa on Sunday to protest a federal vaccine mandate despite the urging of the country's largest trucking federation to comply."

Adrian Ghobrial, a reporter for the Toronto news outlet City News, said that while thousands of people have come out to watch and support the truckers as they drive by, he was skeptical that the convoy consisted of more than 100 trucks:

David Akin, the chief global correspondent with Global News, cited a report from the Ontario Provincial Police that 113 trucks (as well as 276 personal vehicles) were recorded coming into Thunder Bay from Winnipeg.

On social media, the estimate of trucks involved in this convoy has grown by the tweet. A post from Fox News host Sean Hannity, for example, claimed that the freedom convoy consisted of 10,000 trucks. Others claimed that this number was in excess of 50,000 trucks. The claim that 50,000 trucks are participating in this convoy appears to have originated with one of the protest's organizers. The organizers may not be the most reliable source for this figure, however, as they have reason to inflate these numbers.

The number also seems implausible due to what we know about the trucking industry in Canada.

How Many Trucks Are In Canada?

According to the Canadian Trucking Alliance, the cross-border vaccine mandate would impact about 15% (or about 16,000) of the country's truckers. If the 50,000 truck claim is to be believed, that would mean that not only would every one of those 16,000 truckers have to participate in the event, but they'd also need to be joined by 34,000 additional trucks who weren't impacted by the mandate.

The Canadian Trucking Alliance said in a statement that the "the vast majority of the Canadian trucking industry is vaccinated with the overall industry vaccination rate among truck drivers closely mirroring that of the general public. Accordingly, most of our nation’s hard-working truck drivers are continuing to move cross-border and domestic freight to ensure our economy continues to function."