An old picture that showed men kneeling in a "trucker prayer circle" was shared in 2022 as if it were new. 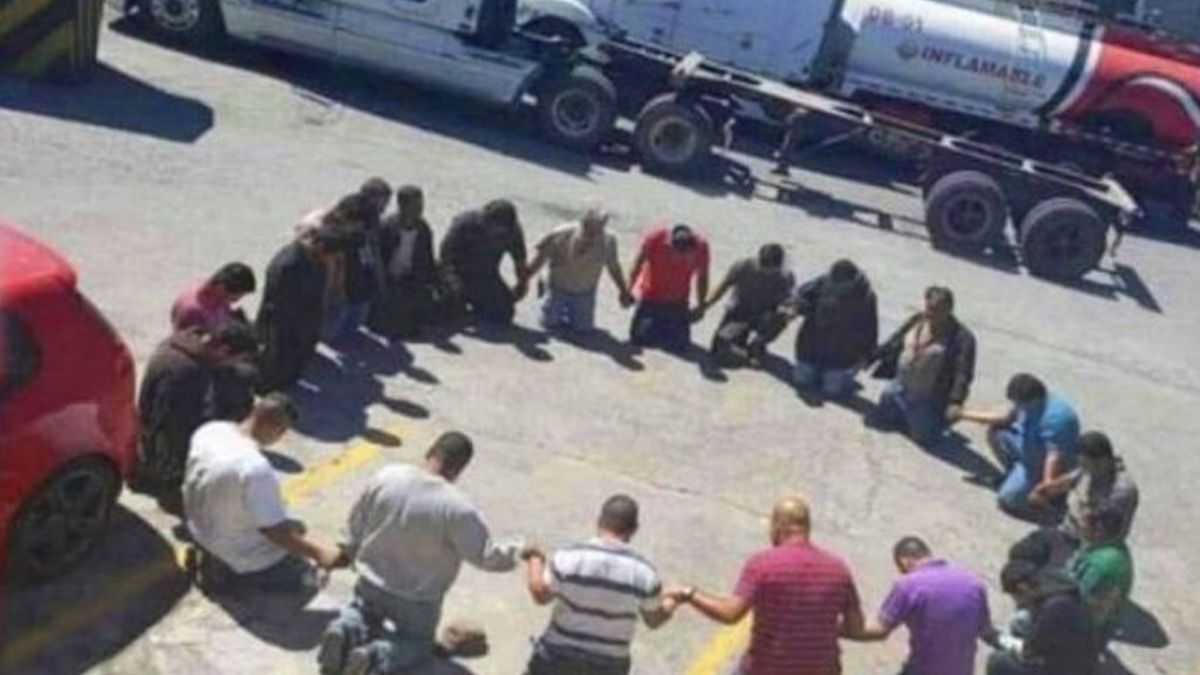 A picture of a trucker prayer circle showed men near trucks praying purportedly near the Canada or Canadian border in 2022 but actually showed Honduras in 2020. (Image Via Instituto Hondureño del Transporte Terrestre (Facebook))

Claim:
A picture shows truckers kneeling and holding hands in a parking lot during protests of COVID-19 restrictions in 2022.
Rating:

On Feb. 15, 2022, the @Sassychickie Twitter account posted a picture that was liked more than 2,000 times. Given its timing, the tweet appeared to claim that the photograph was taken in early 2022 near the U.S.-Canada border, and showed what appeared to be men in a "freedom convoy" trucker prayer circle. They were purportedly seeking "guidance and protection" ahead of the day's protests against COVID-19 restrictions Prime Minister Justin Trudeau. At the time, the protests were taking place near the Ambassador Bridge on the border of Windsor, Ontario, and Detroit, Michigan.

Other Twitter users responded as if the photograph really showed truckers in the "freedom convoy." One user remarked with sarcasm: "'This violence must be stopped.' That will be the headline in the Canadian MSM." Another person responded: "Lord look down on them and protect them they are fighting for a reason please help them and their families get through this hard times AMEN."

We found the same trucker prayer circle picture being posted on Facebook. "Praying for the freedom fighters," one commenter said. Another Facebook user remarked: "God bless them for fighting for freedom!!!"

It's true that the picture really did show truckers in a prayer circle who were seeking "guidance and protection." However, the photograph was captured in Honduras in 2020. The perception that it was recent and had something to do with the "freedom convoy" truckers at the U.S.-Canada border in 2022 was incorrect.

According to the Honduras newspaper La Prensa, the people in the 2020 trucker prayer circle picture were praying for safety from the coronavirus at the beginning of the COVID-19 pandemic. Some of the truckers were wearing T-shirts that would be an unlikely February clothing choice for Michigan or Canada. The truckers in the photograph were not protesting government restrictions or officials. It was captured in Tegucigalpa, the country's capital:

With a prayer entrusting themselves to God, the drivers of heavy load transport in Honduras began their workday this day in the midst of the coronavirus emergency.

Through the social networks of the Honduran Institute of Transport (IHTT) circulate the images of the group of drivers kneeling and holding hands, crying out to be saved from COVID-19.

The group of Hondurans must work during the curfew, since they are exempt from the measures that the government has established to prevent COVID-19 from spreading further in the country.

We found the same picture of the trucker prayer circle on the Facebook page for the Instituto Hondureño del Transporte Terrestre:

The caption translated to: "Cargo drivers start their work day with prayer. This is a worthy example of recognition for these people who are in charge of the supply of goods at a national level."

In sum, the picture of the trucker prayer circle had nothing to do with the "freedom convoy" at the U.S.-Canada border in 2022. It was captured in Honduras in 2020.