Is This the First Photo of Another Solar System?

While the image is special, according to astronomers it's not as novel as a Reddit post claimed. 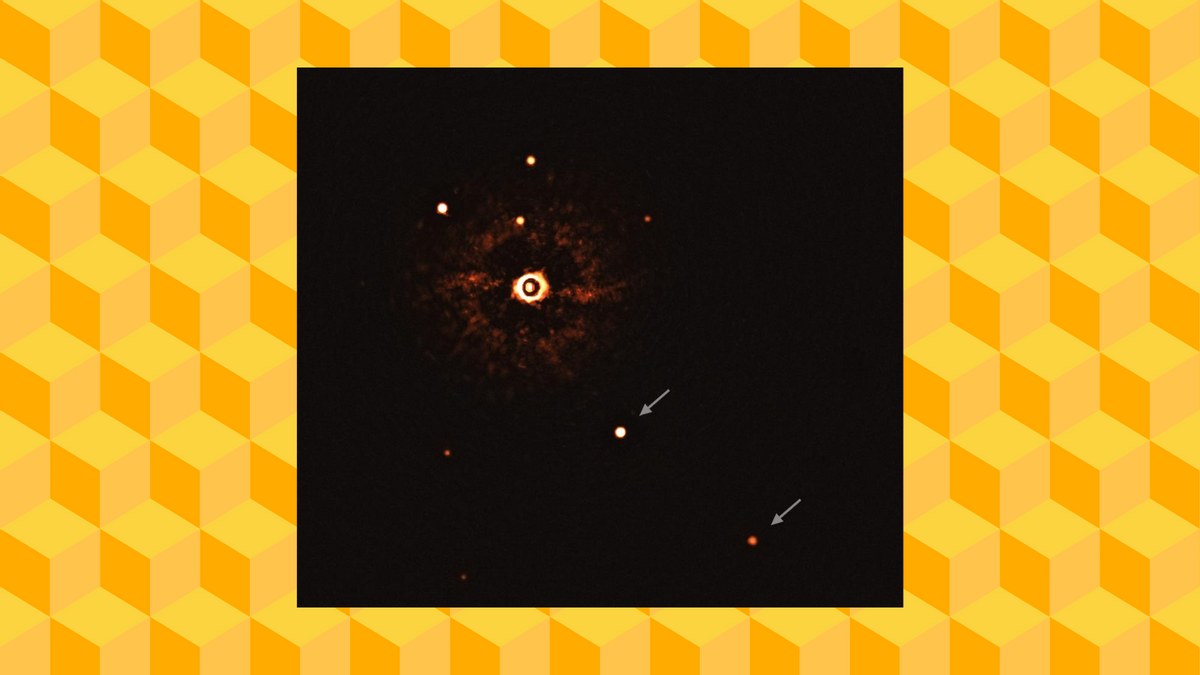 Claim:
An image is authentically the first photograph captured of a planetary system outside of our own solar system.
Rating:

The image is the first to depict planets outside of our solar system orbiting a star similar to the sun. However...

Previous research projects have captured images of planetary systems outside of our own in the past. Additionally, the image isn't a single photograph. Rather, it is a composite of multiple telescopic images taken over the course of a year.

On Oct. 14, 2021, a Reddit user posted a photograph supposedly depicting Earth's first glimpse of another solar system, attracting thousands of comments about the purported novelty of the telescopic discovery.

"You are looking [at] the first image of another solar system," the post claimed. The assertion had some truth to it. The image indeed showed a special astronomical phenomenon: two exoplanets, which are planets outside of our solar system, orbiting a 17-million-year-old star like our sun, dubbed TYC 8998-760-1. But the image deserved some extra context.

A telescope called "the Spectro-Polarimetric High-contrast Exoplanet Research instrument," which operates at a European astronomical observatory in northern Chile, captured the phenomenon about 300 light-years from Earth, according to a July 2020 report in The Astrophysical Journal and the European Southern Observatory (ESO).

We obtained this report's feature image, which matches the photo in the Reddit post (aside from the annotations highlighting the exoplanets and parent star), via the ESO's public database of findings from astronomers' experiments.

However, unlike those in our own solar system, the planets in the picture are "supersized," as Scientific American described, orbiting their parent star at about 160 and 320 times the Earth-to-sun distance.

And aside from the planets' size, the system is far younger than our own, according to researchers.

“This discovery is a snapshot of an environment that is very similar to our Solar System, but at a much earlier stage of its evolution,” Alexander Bohn, a PhD student at Leiden University in the Netherlands and leader of the research project, told the ESO.  The star is a "very young version of our own Sun," he added.

The system's "extreme youth" was the reason why astronomers could capture the telescopic image using pixels of light from the planets themselves, according to NASA. "The planets are so hot from their recent formation that they still glow brightly enough to be seen from our vantage point, even though they're hundreds of light-years away."

But here's a key fact to make sense of the claim, as explained by Scientific American and NASA: The finding marks the third time — not the first — astronomers have used that type of telescopic technology (what scientists call "direct imaging") to take images of exoplanets orbiting a single star. Scientists first captured an exoplanet circling a star, a system that is 170 light-years from Earth, in 2004.

However, that planet, and another grouping captured the same way in 2008, were circling stars "much heavier or lighter" than our sun — making them less comparable, according to Scientific American.

Rather, the system referenced in the Reddit post, with its sun-like star, was the first planetary system captured via direct imaging that could have some characteristics in common with our solar system in its early ages, according to NASA .

"Images of systems with multiple exoplanets are extremely rare, and — until now — astronomers had never directly observed more than one planet orbiting a star similar to the Sun," the ESO reported.

In other words, the image was indeed evidence of scientists for the first time using direct imaging to document multiple planets outside of our solar system orbiting a star like the sun, but it wasn't the first instance of astronomers using that type of telescopic technology to take pictures of another planetary system.

Furthermore, the picture in the Reddit post was not one single photograph, but a composition of multiple telescopic images taken at different times over the course of the year, according to the ESO. That agency's caption for the image read:

"By taking different images at different times, the team were able to distinguish the planets from the background stars."

information@eso.org. “First Ever Image of a Multi-Planet System around a Sun-like Star Captured by ESO Telescope.” Www.Eso.Org, https://www.eso.org/public/news/eso2011/. Accessed 15 Oct. 2021.