Does This Photo Show a Star Being Born?

The formation was said to take place an estimated 1,350 light-years from Earth. 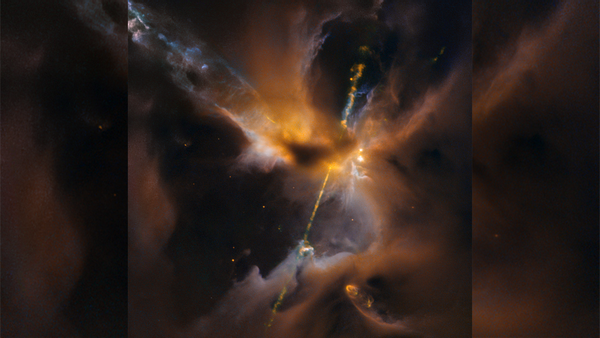 Claim:
A photograph shared to social media in October 2021 showed a star being born in the Milky Way.
Rating:

Looking almost like an abstract artistic rendering of space, a photograph shared to Instagram on Oct. 4, 2021, claimed to show a star being born. With orange and blue-hued colors wafting around what looked to be a linear beam of light, the celestial origins of the photograph was described by NASA:

A star was observed by the Hubble Space Telescope in 2015 using infrared light, which allows the telescope to look through gas and dust to reveal stars as they are newly formed. Unseeable by the human eyes, infrared light is used to view the thermal activity, or heat, of objects to paint a clearer picture of worlds beyond our own.

“In the center of the image, partially obscured by a dark cloak of dust, a newborn star shoots twin jets of hot gas out into space as a sort of birth announcement to the universe,” said NASA in an article dedicated to the Hubble Telescope’s 30th anniversary.

Hubble is equipped with multiple cameras and measuring devices that capture images — but they are all done so in false color, or black and white. To get the vibrant colors seen in photographs taken by the telescope, scientists assign different colors.

"To summarize, there are things Hubble can’t see that we want to know more about, and we need an infrared telescope to learn about them. Things like: stars and planets being born in clouds of dust and gas; the very first stars and galaxies which are so far away the light they emit has been pushed into the infrared; and the chemical fingerprints of elements and molecules in the atmospheres of exoplanets," wrote NASA outreach specialist Maggie Masetti.

Found in the Milky Way, our home galaxy, the event photographed is described by NASA as Herbig-Haro Jet HH 24, a bright patch of nebulosity, or a large cloud of gas and dust, associated with newborn stars. These form when narrow jets of partially ionized gas ejected by stars collide with nearby nebulous material.

The photograph showed a star being born in a “turbulent birthing ground” known as Orion B molecular cloud complex, which is located 1,350 light-years from Earth. (A light-year is the measurement of light traveling in a single Earth year, equating one light year to 6 trillion miles.) In the Orion complex, Orion B meets with the neighboring Orion A cloud complex in the constellation of Orion. Over a few million years, thousands of stars have been born in this active dual-cloud area.

“When stars form within giant clouds of cool molecular hydrogen, some of the surrounding material collapses under gravity to form a rotating, flattened disk encircling the newborn star,” wrote NASA in a December 2020 blog post accompanying the image.

“Although planets will later congeal in the disk, at this early stage the protostar is feeding on the disk with a voracious appetite. Gas from the disk rains down onto the protostar and engorges it. Superheated material spills away and is shot outward from the star in opposite directions along an uncluttered escape route — the star's rotation axis.”

Shocks along these jets heat the surrounding gas to temperatures reaching thousands of degrees Fahrenheit that then collide with surrounding nebulous matter “like a stream of water plowing into a hill of sand.” The Hubble Space Telescope hovers at the boundary of Earth and space in this picture, taken after Hubble second servicing mission in 1997. Hubble drifts 353 miles above the Earth's surface, where it can avoid the atmosphere and clearly see objects in space. NASA

NASA launched the school bus-sized telescope in 1990, and in the three decades since, Hubble has been orbiting the earth at a rate of 5 miles per second — the equivalent of driving a car across North America in 10 minutes. Not only has Hubble seen stars being born, but it has captured stars as they died and planets, stars, and galaxies trillions of miles away. It works by facing towards and photographing space just outside of Earth’s atmosphere, which otherwise blocks most of the light from space. This, NASA says, enables the telescope to digitally snap photographs and send them back to Earth using radio waves.

The successor to Hubble will be the James Webb Space Telescope, the world’s largest and most powerful telescope to be launched in space in December 2021.

And if that wasn't enough stellar excitement to tide you over until then, here are a few other out-of-this-world images captured by Hubble: This is a 50-light-year-wide view of the central region of the Carina Nebula where a maelstrom of star birth — and death — is taking place. Hubble’s legendary “Pillars of Creation” are bathed in the blistering ultraviolet light from a grouping of young, massive stars located off the top of the image. Streamers of gas can be seen bleeding off the pillars as the intense radiation heats and evaporates it into space. Denser regions of the pillars are shielding material beneath them from the powerful radiation. This ancient stellar jewelry box, a globular cluster called NGC 6397, glitters with the light from hundreds of thousands of stars. Hubble has monitored the super-massive star Eta Carinae for more than two decades. The star, the largest member of a double-star system, has been prone to violent outbursts, including an episode in the 1840s during which ejected material formed the bipolar bubbles seen here.

MSFC, Jennifer Wall :. “What Is the Hubble Space Telescope?” NASA, 21 May 2015, https://www.nasa.gov/audience/forstudents/k-4/stories/nasa-knows/what-is-the-hubble-space-telecope-k4.html.