Is the Bruce Lee Quote About Teaching Children Real?

Quote memes claimed the actor once urged teaching children "all the things you were never taught" instead of buying them "the things you never had." 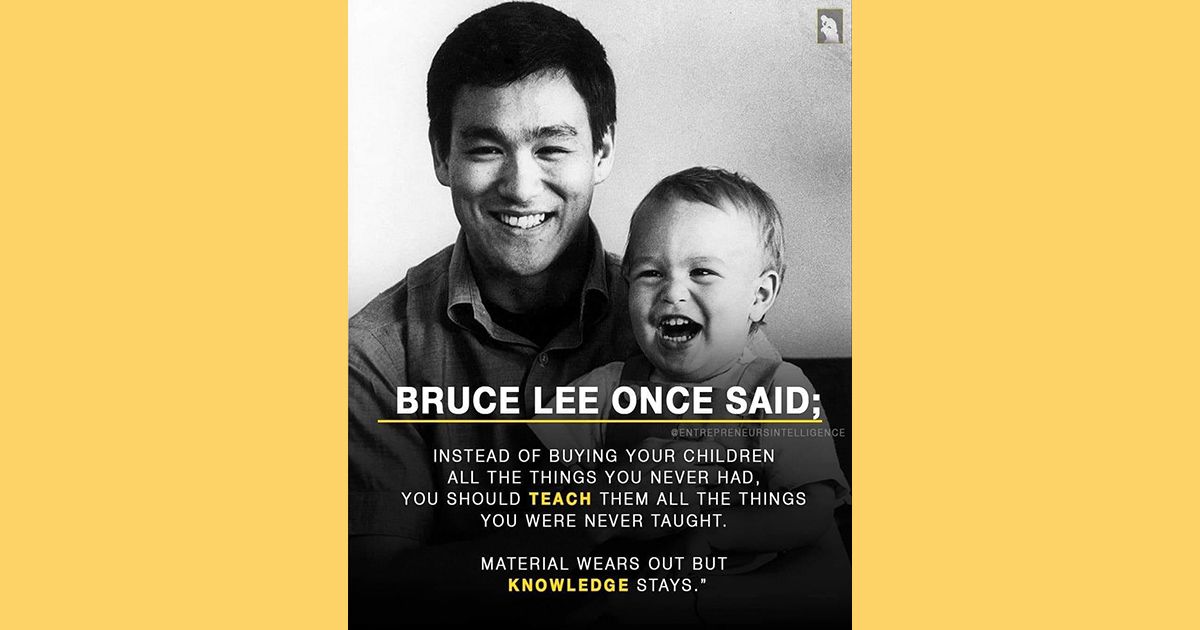 In February 2022, the Anxiety Freedom Today Facebook page posted a questionable quote that read: "Bruce Lee once said: 'Instead of buying your children all the things you never had, you should teach them all the things you were never taught. Material wears out but knowledge stays.'" The picture in the quote meme showed Lee, a former martial arts actor, and his son, Brandon.

Most parents might agree with the sentiment of the quote about teaching children rather than buying them things. However, we found no record of Lee ever having said these words. A blog named Sourcing Bruce Lee also came up empty when looking for the origins of the quote in 2020.

We reached out to the Bruce Lee Foundation to find out more about this quote and will update this story should we receive a response.

On March 21, the same Facebook page posted the same quote a second time. It was shared an additional 84,000 times.

The manager of the page shared it a third time on April 2.

The "instead of buying" quote has been attributed to Lee on Quotepark, Quotespedia, QuotesToEnjoy, some other quote websites, and even on Twitter:

It has also been featured multiple times on Reddit. More than 99 percent of the comments in these Reddit threads didn't appear to question the quote's authenticity. However, one user named u/zacharius55 asked of the quote, "Did Bruce Lee really say this?" Another person responded with a joke quote that was attributed to former U.S. President Abraham Lincoln, saying, "You can always trust what you read on the internet."

We also fact-checked a picture that supposedly showed Lee posing with Elvis Presley in a dojo, a video of Lee purportedly playing ping-pong using nunchaku rather than a paddle, and a claim about whether Lee was an American citizen. Additionally, we looked at the facts behind Lee's death and the theories about his missing sweat glands.

In sum, there's no evidence that Lee ever said: "Instead of buying your children all the things you never had, you should teach them all the things you were never taught," nor did it look like he said, "Material wears out but knowledge stays." However, again, we reached out to the Bruce Lee Foundation for assistance and will update this story if we hear back.

On July 14, 2022, this story's rating was updated from "Research In Progress" to "Unproven" after receiving no response from the Bruce Lee Foundation.