Expertly playing ping-pong using nunchaku rather than a paddle is certainly an impressive feat, no matter who accomplishes it. 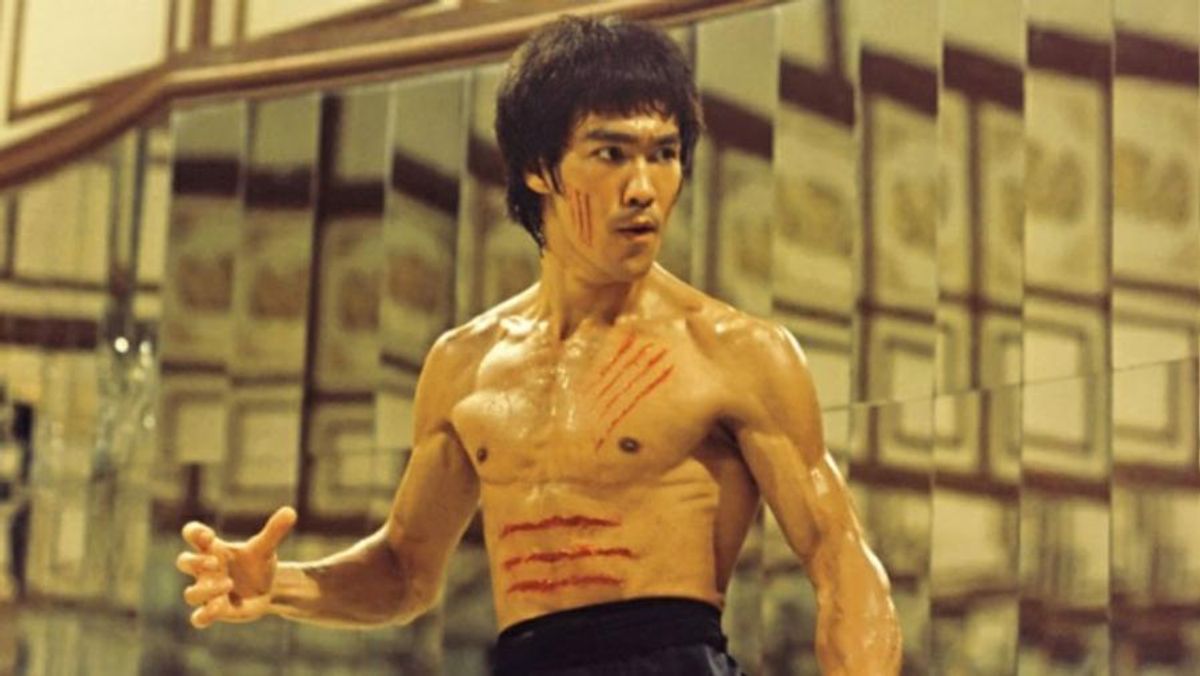 However, as a full version of the video shows, this clip is not a recording of a real event; it's just a digital creation intended as a viral advertisement for the Nokia N96 Limited Edition Bruce Lee cell phone, produced in 2008 (thirty-five years after Lee's death) by the Beijing office of the JWT (J. Walter Thompson) advertising agency.

The video employed a Bruce Lee look-alike actor pretending to play ping-pong against an opponent, their movements sychronized to the sounds of a genuine table tennis match, with the final audio and the visual image of the ball being added to the clip in post-production.

Polly Chu, the JWT Chief Creative Officer responsible for the promotional spot, discussed its creation in an interview with Agency.Asia:

Agency.Asia: Your work for Nokia is simply brilliant. The idea of Bruce Lee playing ping-pong with nunchaku ["nunchukkas"] is so fantastically comprehensible, yet so incredibly obscure.

Every other creative in the world is kicking himself or herself that they didn’t think of it first. That’s the sign of a good idea. How in heaven’s name did you sell an idea that features absolutely no footage of a telephone to a huge multinational client? That is a masterstroke.

Polly Chu: Effective viral relies on an idea that is ‘very’ - very amazing, very funny, very disgusting, or very rude etc. Only when people find it interesting enough, they will spend time with it and share it to others. That makes it ‘viral’.

Bruce Lee had 'very' amazing skills and we knew we had to be true to the legend. Thankfully, we also have a 'very' open-minded client who champions and knows the value of great creative.

Agency.Asia: What was the inspiration for 'Bruce Lee'?

Polly Chu: We've done an estimate on how much it would have cost for paid placements on links like YouTube, Youku, etc. The figures came up to millions of dollars.

A little harder to measure, but equally valuable, is the 'cool factor' it has given the Nokia brand globally. The inspiration behind the idea comes from the teams' love for Bruce Lee personally. We are big fans of him.

That’s why we understand what kind of tricks will stir up hot news among his fans. Of course, 2008 was Bruce Lee’s 30th anniversary also inspired us to launch a campaign to pay tributes to him. Our task was to get people excited enough to visit the campaign’s micro-site where they could learn more about the Nokia N96 Bruce Lee Limited Edition, not to communicate a complete, stand alone product selling proposition which is the objective behind most TVCs [television commercials].

Agency.Asia: The video has been viewed tens of millions of times on YouTube alone. Notwithstanding its phenomenal popularity, there is a colossal amount of debate as to whether the footage was real or whether it is trick photography.

When we look at the forums, people are actually hurling abuse at each other. It is rare that advertising stirs up so much passion. The one thing that seems almost unanimous is that people absolutely love your ad.

Polly Chu: Now, that would be telling! We're also thrilled to see that people think the product is as cool as the viral films. This is also one of the most interesting aspects of this campaign that we can actually know how people reacted with our ad; we could keep tracking on the responses and plan our next step. We launched the 10 seconds teaser first and waited for 2 days.

There were already 700,000 views within 24 hours. Then we launched the full version with the product shot and website address where people could order the limited edition phone. It is in fact a well planned e-marketing campaign. We were thrilled to witness those passionate responses.

Agency.Asia: Did Nokia specifically request a viral campaign, or did 'Nokia N96' start out as a TVC brief and end up going ballistic on You Tube?

Polly Chu: Actually, the original brief was for point-of-sale only but we knew that it wasn't going to cut the mustard. And frankly, we didn’t have media budget at all. Therefore viral video was the only creative solution.

Agency.Asia: What can you tell us about the director, because they absolutely nailed this advertisement? Shot from the darkness, it has a distinctly voyeuristic feel about it.

You really feel like you’re there and you daren’t even breathe in case Bruce should mishit the ping-pong ball - and possibly come and kick your ass! It is an execution altogether different from what one might expect from Nokia, a company renowned for micro technology and refinement.

Polly Chu: Yes, we discussed with the director how to make it look like a never-seen-before secret footage of Bruce Lee. The director took a great effort to study Bruce Lee and found the right talent. We used an up and coming local Chinese director whose passion could be seen in every second of the film.