Does Vid Show Biden Dozing off at Climate Change Summit?

The clip supposedly showed the president sitting as an audience member with his eyes closed. 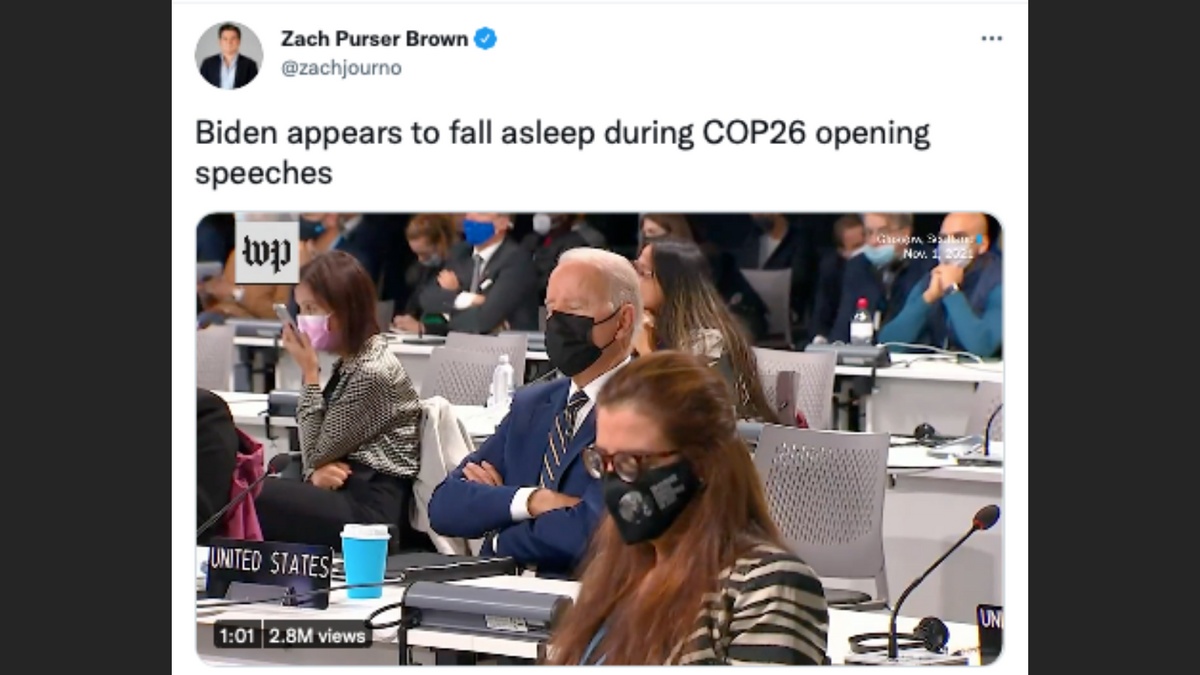 While a Washington Post reporter said the claim appeared true, and footage indeed showed the president with his eyes closed for several seconds, no evidence definitely proved he was struggling to stay awake and not closing his eyes for other reasons.

On Nov. 1, 2021, a video clip surfaced supposedly showing U.S. President Joe Biden dozing off at a global summit with international leaders to brainstorm solutions to climate change. The footage quickly gained millions of views and circulated widely online, particularly among the Democratic president's critics who framed the video as alleged evidence of his poor work ethic.

"An unfortunate metaphor for the Biden presidency," tweeted Kayleigh McEnany, a member of former president Donald Trump's administration, referencing the video showing the 78-year-old president sitting with his arms crossed and purportedly struggling to stay awake. The video also spurred numerous media reports, including a Fox News article with the headline, "Biden appears to fall asleep during climate speech despite claiming it's 'greatest threat' to US security."

Firstly, we sought to determine the authenticity of the video that was supposedly recorded at the United Nation's climate summit, called COP26, in Glasgow, Scotland. The two-week conference began Oct. 31 (the day before the video surfaced), bringing officials from almost 200 countries together to try to negotiate policies to mitigate greenhouse gas emissions, per The Associated Press.

The morning of Nov. 1, Biden's plane took off from Rome, Italy, around 3:45 a.m. (EDT), and he arrived to the Glasgow conference around 7:30 a.m., according to a database of the White House's schedules, press briefings, and pool reports, called Factba.se. The climate change event started about a half hour later, which was 12 p.m. local time.

Just minutes into the program, at 8:06 a.m. (EDT), Zach Purser Brown, a political video editor covering the White House for The Washington Post, posted the video of Biden supposedly dozing off. He captioned the video: "Biden appears to fall asleep during COP26 opening speeches." The 1:20-minute clip included audio of an unknown speaker apparently addressing an audience that included Biden. As that speaker discussed the event, the footage showed Biden close his eyes for several seconds, open his eyes, look in the direction of the camera, and look forward (presumably towards the speaker).

Then, he closed his eyes again — this time for a couple seconds longer — opened them, and then kept them closed for roughly 23 seconds. At that point, an aide walked into frame, over to Biden, and the two had an inaudible interaction. The president at one point gestured his hand as if he was declining some sort of offer.

After that, the aide walked out of frame, Biden and other members of the crowd clapped, and then the president wiped his eyes, as shown in the below-displayed screenshot from the video posted by Brown. Considering the source of the video — a journalist for a reputable news outlet — we considered it genuine, unedited footage of the president.

However, aside from the reporter's observation (which includes the word "appears" and no evidence other than the video to supposedly substantiate the claim), we don't have evidence to definitively prove that the president was struggling to stay awake. While it was highly likely and plausible that was indeed the case, it was possible the president had closed his eyes temporarily for reasons other than sleep, such as to visualize something in his mind.

We reached out to Brown to see whether he had other information for us to consider, and we are waiting for a response.

We also reached out to the White House communication's team for its response to The Washington Post reporter's tweet. In our inquiry, we explicitly asked whether the video indeed showed the president struggling to stay awake, and if so, for the White House's comment to critics who categorized that behavior as purported proof of Biden's lack of mental fitness for the presidential office.

Snopes hasn't received a response to those questions.

In sum, considering the fact that no one from Biden's team has publicly acknowledged the accusation and the only evidence to lend credibility to the claim is a reporter's observation, we rate this claim "Unproven."

If, or when, other evidence surfaces to confirm or deny whether the president was indeed struggling to stay awake at the Nov. 1 event, we will update this report.

The moment during the climate change conference in Glasgow wasn't the first time Biden's critics believed they had evidence to support their "Sleepy Joe" nickname for him.