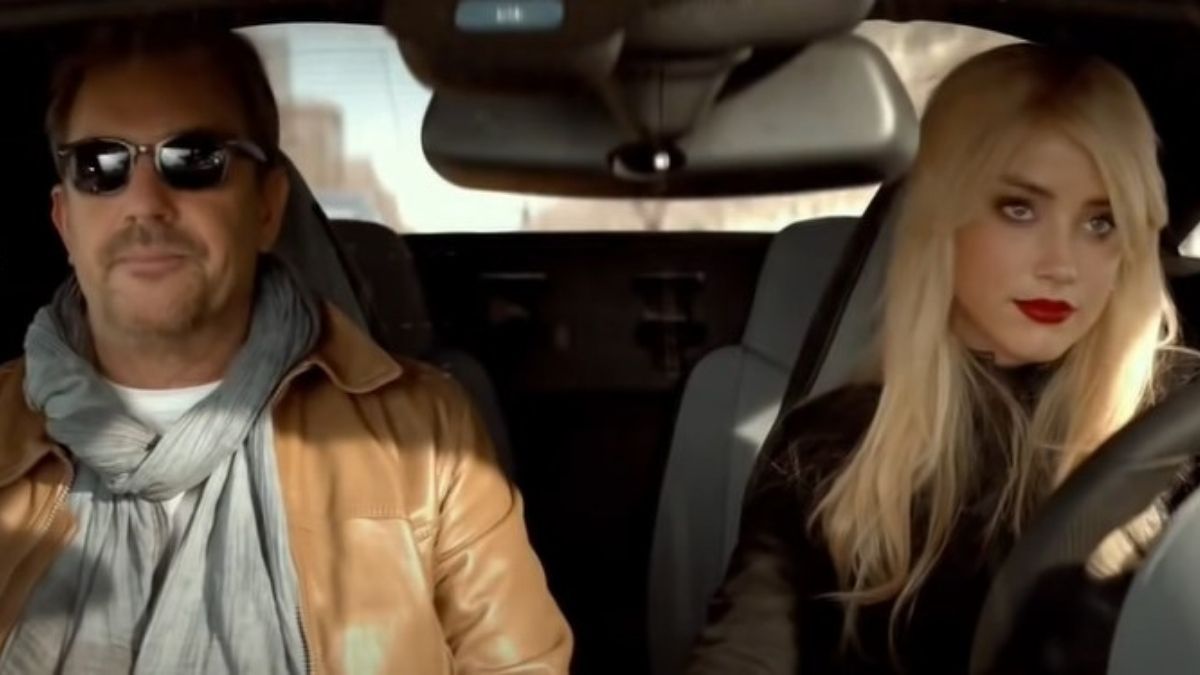 In May 2022, as actors Johnny Depp and Amber Heard went to trial in a defamation lawsuit, social media filled with false rumors that aimed to smear the actress' reputation. For example, users falsely claimed that Heard, Depp's ex-wife, had plagiarized portions of her testimony and that she did cocaine on the stand.

Another rumor focused on a quote that was supposedly uttered by actor Kevin Costner at a party in 2014. At the time, Costner and Heard were starring together in the movie "3 Days to Kill." According to the claim that surfaced during the 2022 trial, Costner purportedly said the following while at an unspecified party surrounding that movie's release:

"When you broke up with [Depp] for a day or two, though, it didn't take you long to find your way into my trailer naked, though, did it?" supposedly in reference to a hiatus in Heard's romantic relationship with Depp. (The two started dating in 2012, according to Variety.) The text in the above-displayed meme can be traced back to a 2014 blog post on the gossip website Crazy Days and Nights (crazydaysandnights.net), which was not a reliable source of credible information. In fact, the website carried a disclaimer labeling some of its content "fiction" and stating that stories on the site may be the product of the author's imagination. The disclaimer read:

Crazy Days and Nights is a gossip site. The site publishes rumors, conjecture, and fiction. In addition to accurately reported information, certain situations, characters and events portrayed in the blog are either products of the author's imagination or are used fictitiously. Information on this site may contain errors or inaccuracies; the blog's proprietor does not make warranty as to the correctness or reliability of the site's content.

The worst person of the day award goes to this B list mostly movie actress who is all about being famous no matter who she has to sleep with. Right now she kind of hit the jackpot with that and is not shy about dropping his name when things don't go her way. Last night she was at the after party for her latest movie and was talking to her co-star who used to be a really big shot and is having a comeback year. At one point our actress was talking about her boyfriend and the actor said, "When you broke up with him for a day or two though it didn't take you long to find your way into my trailer naked though did it?" Right in front of ten people he said this. The actor in question is married.

In other words, under the pretense of the rumor, an identified person told another unnamed person (someone affiliated with Crazy Days and Nights) about overhearing Costner make the remark at some sort of party related to the release of "3 Days to Kill." However, there was no indication that Costner actually said this.

While this quote originated with a website that claims to publish a mix of fiction and "accurately reported information," we searched contemporaneous reports about Depp, Heard, and Costner around the filming of "3 Days to Kill" to see if we could find anything about the alleged break-up between Heard and Depp and/or Heard supposedly having a sexual relationship with Costner. Our search came up empty. In fact, articles about the movie's premiere noted that Depp and Heard showcased some public displays of affection as they walked the red carpet.

It was also worth noting that the 2014 "blind item" lacked details (when and where was this purported party?) and that none of the "10 people" who supposedly heard the alleged statement from Costner had actually confirmed it. Furthermore, Depp, even during his contentious trial against Heard, has not accused Heard of having a sexual relationship with Costner.

In 2016, Vanity Fair profiled the author of Crazy Days and Nights, a supposed entertainment lawyer who goes by the name "Enty." In that article, Enty said that the site gets its rumors from various sources around Hollywood, and that they are not always factual. Vanity Fair wrote:

While smaller blinds sourced from eye-witnesses get revealed on a daily basis, larger blinds are only revealed if Enty has a direct line to them. 'Those are stories that either I’ve personally encountered, or somebody is an amazing source, or one of my friends, or somebody where I know exactly where they work, or what they would have seen. In that situation, I go ahead and reveal it. Have I ever been wrong? Yeah, I’ve been wrong about things before. I just try to keep my wrongs minimized as much as I can.'

In sum, the claim that Costner once said Heard "[found her] way into [his] trailer naked" comes from an anonymous, third-hand source and stemmed from a gossip site with questionable credibility. While there was no definitive way for us to independently confirm or debunk its authenticity, the rumor had several characteristics of misinformation.