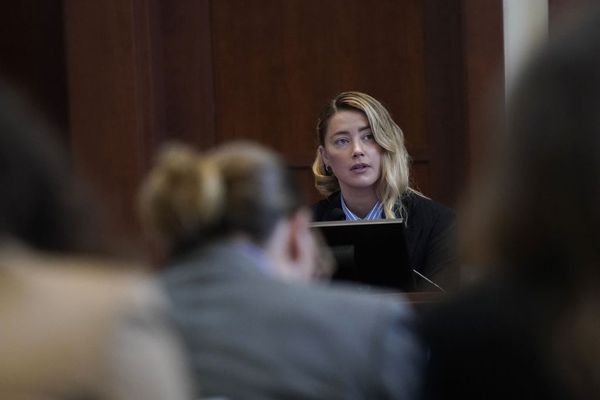 Claim:
On May 4, 2022, Amber Heard borrowed lines from the movie "The Talented Mr. Ripley" in her testimony during a defamation trial brought by Johnny Depp.
Rating:

In the spring of 2022, actors Amber Heard and Johnny Depp, who divorced in 2017, went to trial to settle a defamation case related to an article Heard wrote alleging that Depp had abused her during their marriage. Since the trial involved two popular mainstream actors, it also involved large fan bases that vehemently professed their side's innocence (or the other's guilt).

On May 4, as Heard took the stand, some social media users started spreading a rumor that Heard was "acting" during her testimony by taking quotes from movies and passing them off as her own thoughts. One popular claim held that Heard had stolen these lines nearly word-for-word from the 1999 movie "The Talented Mr. Ripley." While this meme shows a genuine passage from the movie "The Talented Mr. Ripley" (transcribed below), Heard did not say these words during the trial.

The thing with Dickie… it's like the sun shines on you, and it's glorious. And then he forgets you and it's very, very cold … When you have his attention, you feel like you're the only person in the world, that's why everybody loves him so much. ("The Talented Mr. Ripley")

[See also on Snopes: Was Johnny Depp’s Doorman Driving and Vaping While Giving Testimony in Trial?]

The Claim Was Shared Without Evidence

The claim that Heard repeated these lines from "The Talented Mr. Ripley" was presented on social media with no evidence. Those asserting it did not share a video of Heard making the alleged statement, nor did they link to any news articles containing this quote or a transcript from the trial that would substantiate the accusation. The former fact was especially suspicious, since video of this trial was publicly available.

Heard Did Not Make an Opening Statement

The above-displayed meme says the quote came from Heard's "opening statement." This is an odd claim, however, in that it was Heard's lawyer, not Heard herself, who made an opening statement on her behalf.

Heard took the stand on May 4, but she didn't make any sort of opening statement. You can see Heard take the stand at the 3:45:20 mark of the following video. Heard was asked some basic questions (her name, her age, etc.) during the first few moments of her testimony. She did not provide an elaborate opening statement.

We watched Heard's testimony and did not hear her utter the alleged passage from "The Talented Mr. Ripley." We also searched news articles about the trial and found no reputable sources reporting that Heard had said these words. We rate the claim that she did "False."

Did Heard Try To Pass Off Other Movie Lines as Her Own?

In a continuing attempt to sow doubt over Heard’s testimony, some social media users expanded the allegation to include lines from other movies as well. These users claimed that Heard was attempting to “Gone Girl” the situation -- a reference to the 2014 movie in which a woman manipulates the media after faking her death -- and that she was using movie lines to "act" her way through her testimony.

We reviewed several of these rumors and found the claim that Heard was “stealing” movie lines implausible. These rumors are largely based on brief, cherry-picked moments in which Heard uses generic language that also happens to have turned up in movies. For example, one claim holds that she took a line from Julia Roberts’ character in the 1999 movie “Notting Hill” when she said Depp drank “lots of tea.”

But Roberts’ character in “Notting Hill” was not the first to say that someone drank “lots of tea.” It's a common phrase that has been used many times before and since that film’s release.

Similarly brief and generic phrases make up the bulk of these claims. Take the following TikTok video, which attempts to show how Heard borrowed phrases like “what happened here,” “the most beautiful woman in the world,” and “you think it’s funny bitch” from various movies.

Those spreading these rumors appear to be actively searching for evidence to support a belief that they had already decided: that Heard was "acting" during her testimony in the trial. This is an example of confirmation bias in action.

For example, we could “prove” that it was Depp, not Heard, who was acting during his testimony by demonstrating that he uttered common phrases also found in movies. At one point in the trial, Depp said he was making a “ludicrous sum of money.” A nearly identical phrase can be heard in “Believe: The Eddie Izzard Story.” At another point, Depp says, “I loved her instantly.” An identical quote appears in the book “American Outlaw” by Jesse James.

These are not evidence of Depp or Heard stealing lines from movies to make their testimonies more compelling. These are examples of social media users hearing what they wanted to hear to reinforce their preconceived ideas.

May 04, Benjamin VanHoose, and 2022 02:15 Pm. “Amber Heard Takes the Stand in Johnny Depp Trial: ‘This Is Horrible for Me.’” PEOPLE.Com, https://people.com/movies/amber-heard-takes-stand-in-johnny-depp-defamation-case/. Accessed 5 May 2022.