We used Facebook Inc.'s latest financial report to estimate its revenue loss per second during the global shut down. 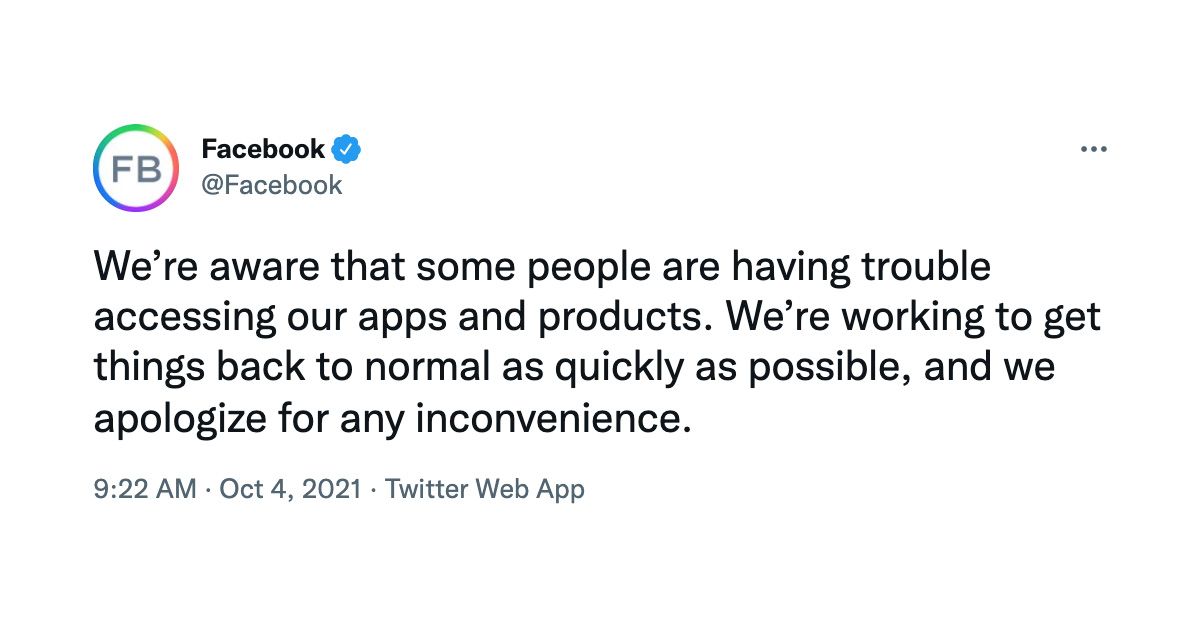 For hours on Oct. 4, 2021, Facebook, Instagram, Messenger, and WhatsApp were inaccessible to users globally for reasons that were unknown.

Cybersecurity watchdogs dubbed the outage, which spanned more than five hours, the most severe service interruption to affect Facebook. Inc.'s products to date. For our live coverage of the event, visit here.

During the ordeal, CNN correspondent Donie O'Sullivan posed this question to Twitter: "Has anyone calculated how much ad $$$ Facebook is losing out on every second its down?"

First, we obtained a report from the company outlining its finances for the second quarter of 2021 (Q2), a 90-day period between April 1 and June 30. That was the most recent period for which the company had released publicly available budget data at the time of the outage.

Next, we considered the duration of the outage Reputable news outlets including Snopes and The Associated Press reported that the sites and applications went down around 11:40 a.m. (EDT). Then, around 4:30 p.m., the platforms started becoming usable for some users. Less and less people reported outages from that point on, according to Down Detector, a tool that catalogs such complaints. Snopes reported the sites at least partially functional around 5:40 p.m. (EDT).

For the sake of this analysis to determine a hypothetical revenue loss, we'll consider the outage lasted six hours.

With that in mind, the company risked a $79 million loss in ad revenue ($79,388,888.88) — an amount that grew with every minute the platforms remained down for some users.

That estimation, of course, centered on hypothetical spending and earning by the company, as well as the assumption that its budget decisions would remain somewhat consistent to that of Q2 and not experience any significant changes (including revenue growth).

We reached out to Facebook for its comments on our calculation, or if it had other budget information for us to consider. About five hours later, a spokesperson emailed us the below-transcribed statement — a message that did not address our questions about ad revenue nor acknowledge our estimations.

"To everyone who was affected by the outages on our platforms today: we’re sorry," the email said. "We know billions of people and businesses around the world depend on our products and services to stay connected. We appreciate your patience as we come back online."

Additionally, we estimated the outage's financial impact on the global market using an interactive tool by NetBlocks — an organization that tracks internet connectivity and outages. According to that group's calculator, a six-hour shut down of Facebook, Instagram, and WhatsApp platforms meant an estimated loss of almost $1 billion to the global economy. The service disruptions were not the only issue for Facebook Inc. generating headlines in early October.

In a breaking-news story about the apps and sites going offline, The Associated Press called attention to a "60 Minutes" broadcast the day prior. In that report, someone who previously worked for the company, and who had filed complaints with federal law enforcement over some of Facebook's practices, revealed her identity publicly for the first time. The AP reported:

Facebook is going through a major crisis after the whistleblower who was the source of The Wall Street Journal’s series of stories exposing the company’s awareness of internal research into the negative effects of its products and decisions went public on “60 Minutes” on Sunday.

Frances Haugen was identified in a “60 Minutes” interview Sunday as the woman who anonymously filed complaints with federal law enforcement that the company’s own research shows how it magnifies hate and misinformation, leads to increased polarization, and that Instagram, specifically, can harm teenage girls’ mental health.

The Journal’s stories, called “The Facebook Files,” painted a picture of a company focused on growth and its own interests instead of the public good. Facebook has tried to play down the research. Nick Clegg, the company’s vice president of policy and public affairs, wrote to Facebook employees in a memo Friday that “social media has had a big impact on society in recent years, and Facebook is often a place where much of this debate plays out.”

The company's stock value took a hit in the hours after the "60 Minutes" segment aired and during the service outage, Bloomberg reported. It said of CEO Mark Zuckerberg's personal wealth:

The stock slide on Monday sent Zuckerberg’s worth down to $120.9 billion, dropping him below Bill Gates to No. 5 on the Bloomberg Billionaires Index. He’s lost about $19 billion of wealth since Sept. 13, when he was worth nearly $140 billion, according to the index.

Before Oct. 4, the last major service interruption — which temporarily knocked down many of the world’s top websites, including Twitch and Reddit, in June 2021 — lasted less than an hour, according to The Associated Press. That error stemmed from a content delivery network named Fastly.

Below is a sample of Snopes' original reporting about Facebook's products and practices:

This report was updated to include a Facebook spokesperson's emailed response to our questions about ad revenue.

This report was updated to include estimated calculations for the entire duration of the outage, which spanned more than five hours.