In reality, Biden used the hand gesture to illustrate his assertion that massive corporations and U.S. President Donald Trump himself have in the past paid "zero" in taxes. 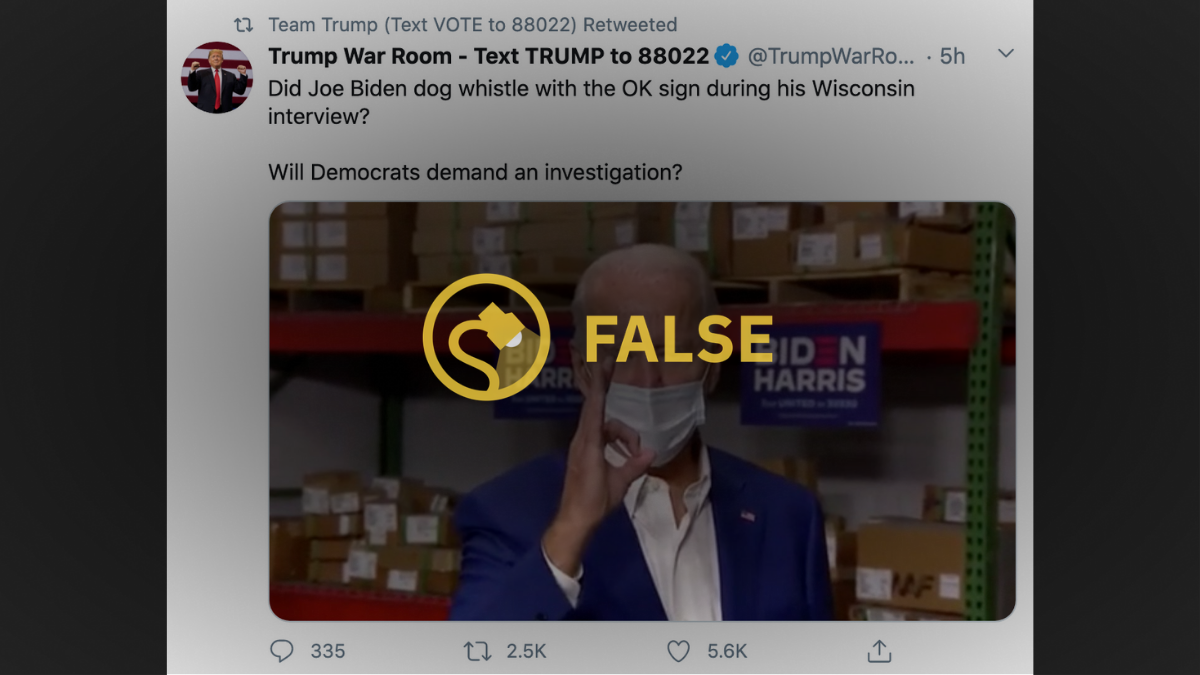 The campaign to reelect U.S. President Donald Trump falsely suggested on Sept. 22, 2020, that his Democratic opponent Joe Biden had promoted a notorious white supremacist hand gesture during an interview in Wisconsin.

On Twitter, @TrumpWarRoom, an account run by the president's campaign, posted a still image of Biden wearing a face mask and using his right hand to make a gesture that traditionally signifies "OK" or "zero," but has in recent years also been used — with both ironic and serious intent — as a "white power" symbol. Along with the photograph, Trump's campaign wrote, "Did Joe Biden dog whistle with the OK sign during his Wisconsin interview? Will Democrats demand an investigation?"

The post was retweeted by the campaign's primary account @TeamTrump and had been shared thousands of times within a few hours: In using the hand gesture, Biden did not "dog whistle" — send a coded signal to a specific subsection of his audience — because in reality there was no ambiguity whatsoever about the meaning of the gesture when viewed in its proper context.

The screenshot tweeted out by @TrumpWarRoom originated in a Sept. 21, 2020, interview Biden conducted with WLUK during a campaign visit to Wisconsin. Reporter Kia Murray asked Biden to make a closing statement to voters in the state, addressing any concerns they might have about socialism and increased taxation. In his response, Biden used the hand gesture twice, once with each hand, to illustrate his assertion that massive corporations and Trump himself have in the past paid "zero" in taxes.

In order to provide proper context for Biden's hand gesture, the following is a transcript of the former vice president's response. A video of the interview can be viewed on WLUK's website. Biden's closing statement begins at the 4:30 mark, and he makes the "zero" hand signal at 5:13 and 5:24.

Murray: Talk to the voters that are worried about socialism and you raising taxes.

Biden: First of all, I guarantee you, I promise, I've never broken my word — anyone making less than $400,000 will not see one single penny in their tax raised. Number two — I beat the socialists. That's how I got elected, that's how I got the nomination. Do I look like a socialist? Look at my career, my whole career. I am not a socialist. Number three — What we're going to do is make sure that we make people begin to pay their fair share.

I'm not trying to punish anybody, but the idea that 19 corporations, making billions of dollars, pay zero [makes "zero" gesture with left hand] in taxes? The idea that you can be making a billion dollars, or millions of dollars like Donald Trump didn't acknowledge, when he was trying to open up a casino in New Jersey, and they had to show his tax returns — he paid zero taxes [makes "zero" gesture with right hand] and what did he say when they asked, "Well how do you feel about this?' "Well it just proves I'm smarter than everybody else." He knows — these guys know how to game the system. The gaming's going to be over when I'm elected.

The Anti-Defamation League has explained the evolution of the "OK" symbol and its deployment in recent years by white nationalists:

In 2017, the “okay” hand gesture acquired a new and different significance thanks to a hoax by members of the website 4chan to falsely promote the gesture as a hate symbol, claiming that the gesture represented the letters “wp,” for “white power.” The “okay” gesture hoax was merely the latest in a series of similar 4chan hoaxes using various innocuous symbols; in each case, the hoaxers hoped that the media and liberals would overreact by condemning a common image as white supremacist.

In the case of the “okay” gesture, the hoax was so successful the symbol became a popular trolling tactic on the part of right-leaning individuals, who would often post photos to social media of themselves posing while making the “okay” gesture. Ironically, some white supremacists themselves soon also participated in such trolling tactics, lending an actual credence to those who labeled the trolling gesture as racist in nature.

By 2019, at least some white supremacists seem to have abandoned the ironic or satiric intent behind the original trolling campaign and used the symbol as a sincere expression of white supremacy, such as when Australian white supremacist Brenton Tarrant flashed the symbol during a March 2019 courtroom appearance soon after his arrest for allegedly murdering 50 people in a shooting spree at mosques in Christchurch, New Zealand.

The "dog whistle" smear against Biden represents another breach, on the part of the president's reelection campaign, of the traditional norms and parameters of campaign rhetoric. Earlier in September, Trump promoted a tweet that falsely labeled his opponent a pedophile and told supporters in North Carolina that Biden only "had half of his head left."

Snopes asked the Trump campaign why they falsely suggested Biden had used the hand gesture as a white nationalist symbol and whether they accepted the fact that he had not. We did not receive a response of any kind, but if we do, we'll update this article accordingly.