"Was he joking?" has become a frequent question for reporters, and voters, since Trump began his political career in 2015. 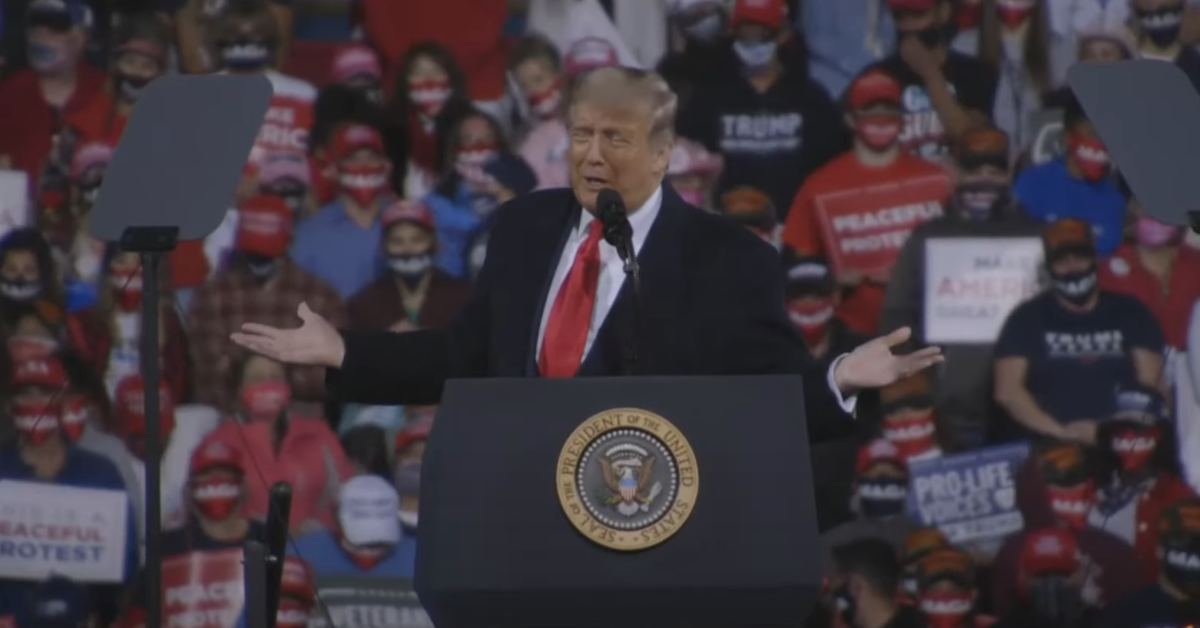 On Sept. 19, 2020, Trump said at a rally in North Carolina, "You can't have this guy [Biden] as your president ... Maybe I'll sign an executive order, 'You cannot have him as your president.'"

It's unclear whether Trump was joking.

In September 2020, readers asked Snopes to examine the accuracy of reports that claimed U.S. President Donald Trump had threatened or suggested signing an executive order to prevent his Democratic opponent Joe Biden from ever becoming president.

On Sept. 19, 2020, the Inquisitr published an article with the headline "Donald Trump Suggests Signing Executive Order Disqualifying Joe Biden From Running For President."

On Sept. 20, Forbes published an article with the headline "Trump Threatens to Issue Executive Order Preventing Biden From Being Elected President." The article reported that:

"In a wide-ranging speech at a campaign rally Saturday night, President Donald Trump ramped up attacks against his opponent, Joe Biden, calling Biden the 'dumbest of all candidates,' and went so far as to declare, 'maybe I'll sign an executive order that you cannot have him as your president.'"

The Forbes article contained the following short video clip from the speech, posted to Twitter by @Acyn:

In response to the clip, several observers suggested Trump was "gauging the reaction" of the public to would-be acts of authoritarianism on his part.

The video footage posted by @Acyn was authentic and undoctored, and both Forbes and the Inquisitr quoted Trump accurately. However, it's not clear whether the president was joking.

The remarks in question came during his speech in Fayetteville, North Carolina, on Sept. 19. Throughout, Trump continued his campaign's line of attack against Biden as being weak, as well as questioning his mental acuity. Earlier, he had described his opponent as "the dumbest of all candidates" and "the worst candidate in the history of presidential politics," claiming Biden was "shot" and "had half of his head left," and suggested that Biden's campaign would inject him with drugs in order to give him energy during the first presidential debate on Sept. 29.

At times, Trump's tone and demeanor resembled that of a stand-up comedian, rather than a politician holding a rally during a reelection campaign, and the crowd, composed of his supporters, frequently laughed along at some of his more outrageous (and frequently false) attacks on Biden and other of the president's favorite rhetorical targets.

Toward the end of his speech, Trump characterized Biden as weak, pointing to the criticism he had faced from U.S. Sen. Kamala Harris of California, during the Democratic primaries, whom he later named as his vice-presidential running mate. Trump speculated that Biden, if elected president, would be overrun by sinister left-wing elements within the Democratic party, and would ultimately give way for a Harris presidency:

Nobody treated him worse, then he picked her ... She called him a racist, right? She talked about "MeToo-ing" him. He was going to be "MeTooed", right? ... Lot of bad things. There was nobody — even, think of it, even Pocahontas [U.S. Sen. Elizabeth Warren, D, Massachusetts] treated him better. She knocked the hell out of Bloomberg, but she left him, sort of, alone. I think she felt sorry for him. I heard she felt sorry for him. I don't want people to feel sorry for our president. I want other people — really — to feel sorry for themselves because we have somebody that knows what they're doing. We can't have this. You know, we can joke, we can play games, we can have fun — you can't have this guy as your president. [Audience boos]. You can't have — maybe I'll sign an executive order "You cannot have him as your president." [Audience laughs and cheers].

Trump's demeanor at that moment in his speech, combined with his mock quotation of the text of the putative executive order, as well as the exaggerated and ironic tone of much of his speech in Fayetteville, suggest that he was, in fact, joking when he said he might sign (or attempt to sign) an executive order barring Biden from becoming president.

If the line had been delivered by most other politicians, it's likely there would not be much doubt that it was intended as humorous, but Trump has long been the subject of scrutiny and criticism for purportedly pronouncing serious observations and earnest desires in the form of "jokes," in speeches and press conferences.

For example, in July 2016 Trump appeared to ask the Russian government to hack the email server of his opponent, former U.S. Sen. Hillary Clinton — a remark he later brushed off as "sarcastic." And in June 2020, the president said he had asked officials to slow down COVID-19 coronavirus testing, in order to artificially lower the apparent rate of infection in the United States. Administration officials later claimed Trump was joking, but the president himself insisted, "I don't kid."

In order to help clarify the substance and intent of Trump's remarks in Fayetteville in September 2020, and to assuage the concerns of the public that he might seek to defy constitutional norms by signing an executive order barring his opponent from succeeding him in office, Snopes put a straightforward question to both the White House and the Trump campaign — "Was the president joking, or not?" Remarkably, neither has responded to that question. If either does, we will update this fact check accordingly.