Here's what the president said before right-wing extremists breached the Capitol. 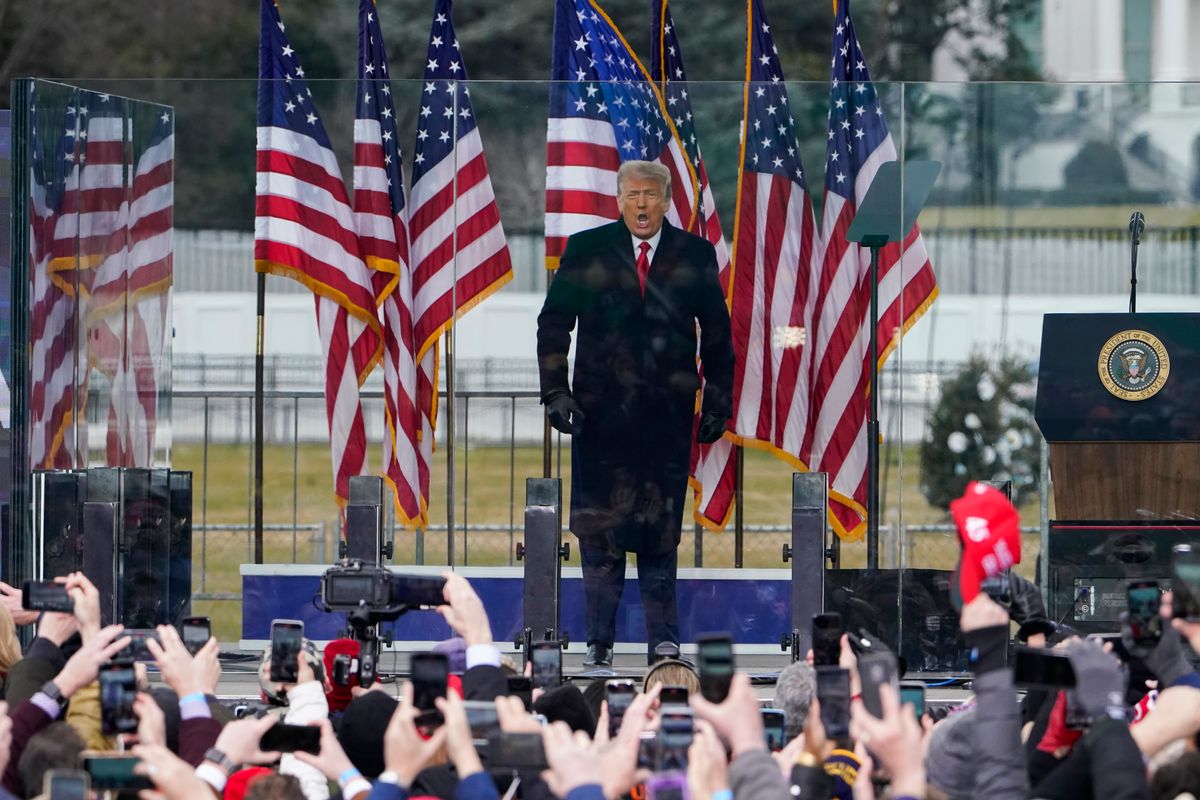 Claim:
In a speech on Jan. 6, 2021, Trump told supporters to storm the U.S. Capitol to delay the constitutional process that would affirm Joe Biden’s presidency.
Rating:

U.S. President Donald Trump did tell supporters on Jan. 6, 2021, to gather at the U.S. Capitol and try to convince members of Congress to delay the constitutional process that would affirm Biden's presidency.

Trump did not explicitly tell people to "storm" or "breach" or "break into" the Capitol.

It was a subjective call on whether Trump's use of phrases "you have to show strength" and "demand that Congress do the right thing" were meant to condone violence and crimes among right-wing extremists without explicitly encouraging it.

On Jan. 6, 2021, American right-wing extremists breached security perimeters at the U.S. Capitol, forcing the building into a lockdown and halting a ceremonial vote to affirm Joe Biden's presidential victory over Donald Trump.

News reports said one woman was shot and critically injured, and National Guard members were preparing to monitor the perimeter of the building, as of this report. (See our live blog of all misinformation related to the event here.)

Shortly after the mob took over the federal building, as pressure mounted on Trump to condemn the illegal behavior, reports surfaced alleging that he had instigated the violence in a speech hours earlier. As the violence escalated, and members of Congress and Trump's administration evacuated the building, an editor at The Guardian tweeted:

It was true that Trump addressed supporters gathered for a so-called "Save America Rally" near the White House earlier in the day. In the speech around noon (EST) at a neighboring park, Trump perpetuated baseless and false conspiracies attempting to cast doubt on the integrity of U.S. elections and rally people into thinking they could block Congress' formal certification of Biden's presidential win.

At one point during the remarks — according to video footage by Bloomberg and a transcript by Factba.se, a database of Trump's statements — he said:

Then, later in the speech he said:

In short, the president called on supporters to "peacefully and patriotically" march or walk to the Capitol on Jan. 6, 2021, to urge members of the senate to defy the Electoral College vote in a constitutionally mandated procedure to affirm Biden's win, without using the words "storm" or "breach" or "break into" the federal building.

Put another way, the president encouraged supporters to descend on the Capitol grounds and "cheer" on senators who would break laws governing U.S. elections, but he did not explicitly tell people to commit crimes themselves.

Furthermore, it was a subjective call on whether the phrases "you have to show strength" and "demand that Congress do the right thing" were actually messages condoning crimes and violence among extremists, without outright encouraging it. Such a rhetorical strategy is known to scholars of white nationalist and extremist groups, including the Proud Boys.

In sum, while Trump did not say the words "storm" or "break into" the White House, Trump indeed told supporters to gather at the U.S. Capitol and try to convince members of Congress to delay the constitutional process that would affirm Biden's presidency. For those reasons, and the ones outlined above, we rate this claim a "Mixture."

CORRECTION [Jan. 31, 2021]: A previous version of this article incorrectly stated the starting time of Trump's speech as "around 11 a.m." It was around noon.