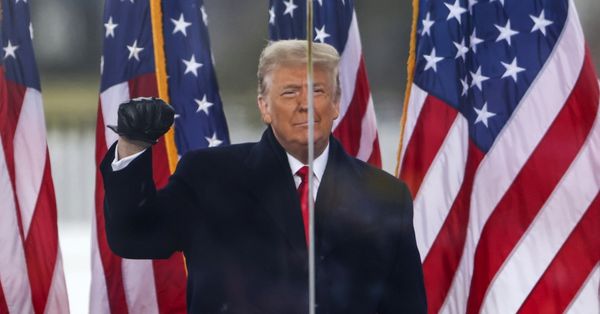 Claim:
In a video displayed during U.S. President Donald Trump's second impeachment trial on Feb. 9, 2021, House Democrats did not show footage of Trump telling supporters on Jan. 6 to "peacefully and patriotically make your voices heard."
Rating:

Referring to a video displayed during U.S. President Donald Trump's second impeachment trial on Feb. 9, 2021, Rep. Jim Jordan, a fierce Trump supporter, alleged in the below-displayed Facebook post that House Democrats intentionally "left out" footage of the former president telling supporters on Jan. 6 to "peacefully and patriotically" protest the outcome of the 2020 election.

To investigate the claim, we first gathered evidence to confirm or disprove that Trump made the comment to supporters on Jan. 6. According to video footage by Bloomberg and a transcript by Factba.se of Trump's remarks during the so-called "Save America Rally" at Ellipse Park near the White House around noon (EST) that day, the former president indeed said:

He made that statement in the first half of the approximately 70-minute speech, which centered on baseless conspiracy theories advanced to convince Americans that he legally deserved another term in the White House.

Later in the remarks, as some of his supporters started breaching security barriers surrounding the Capitol, the former president also said:

In other words, it was true that Trump at one point told his supporters to "peacefully and patriotically" leave the pro-Trump event at Ellipse Park — which is directly south of the White House and a roughly 20-minute walk from the Capitol — and go to the Capitol to try to convince members of Congress to delay a constitutional vote affirming then-President-elect Joe Biden's 2020 election win.

Those were not his only directions to the crowd, however. In the same speech, he also used the following phrases while encouraging people to head to the Capitol and protest his election loss, according to the transcript and video of the speech:

It's a subjective call as to whether those comments were meant to condone violence and crimes — the opposite of telling people to march "peacefully and patriotically" — on the part of right-wing extremists without explicitly encouraging it.

Next, to investigate the claim that Democrats omitted any reference to Trump's "peacefully and patriotically" remark during the alleged video displayed on the first day of the impeachment trial, we sought access to the video compilation that Democratic House impeachment managers (a group of nine lawmakers appointed by House Speaker Nancy Pelosi) presented in the Senate chamber as part of their opening presentations on Feb. 9, via CSPAN and The Guardian.

Based on our scene-by-scene review of that roughly 13-minute video, Jordan's allegation in the Facebook post was true: It did not include this authentic quote from the president at Ellipse Park: "peacefully and patriotically make your votes heard today."

The video montage did, however, include a portion of a video Trump posted to social media during the riot, in which he did not condemn the mob nor back down from his weeks-long misinformation campaign about the 2020 election, but rather told them to "go home in peace." Let us note here: As the trial continued into its second day, Democratic impeachment managers did acknowledge Trump's more peaceable remarks, while attempting to remind viewers of the larger context. On Feb. 10, around 3:30 p.m. (EST) (hours after Meadows' tweet), Rep. Madeleine Dean, a Democrat from Pennsylvania and impeachment manager, confirmed that Trump told supporters to "peacefully and patriotically" protest on Jan. 6, and played footage of that moment on the Senate floor.

"One of President Trump's key defenses focus on what he said for a few seconds, 15 minutes into the speech," she said, and then played the clip, according to C-SPAN footage. "In a speech spanning almost 11,000 words — yes, we did check — that was the one time, the only time, president Trump used the word 'peaceful' or any suggestion of nonviolence."