Iterations of this meme have been around since at least 2018. 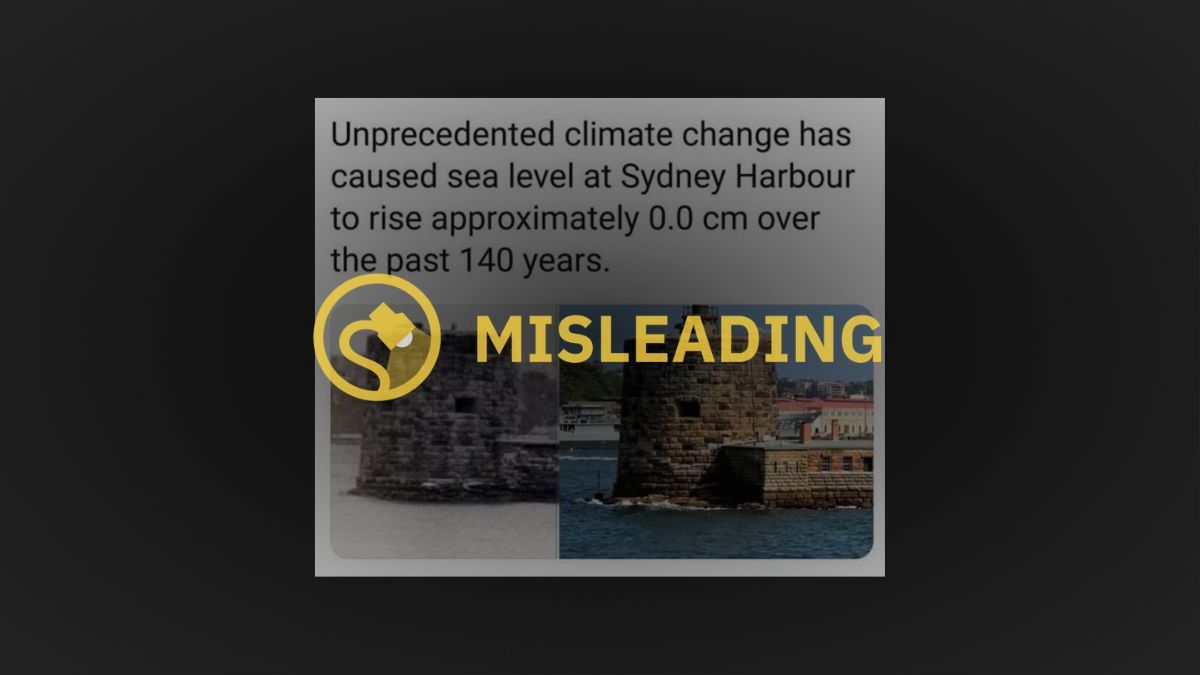 Claim:
Two photographs taken in different centuries of Fort Denison in Sydney Harbor show that the sea level in that area has not changed in over 100 years, thus disproving climate change.
Rating:

Two photographs taken of Fort Denison in Sydney Harbor, Australia — one a black-and-white photo from the 19th century and the other a modern, full-color picture — are circulating with the claim that they show the sea level in that area has not changed in over a century, thus (supposedly) disproving climate change.

We found by conducting a reverse image search that iterations of the same meme have been shared online since at least 2018. In July 2022, it was shared to Twitter, falsely claiming that “unprecedented climate change” had caused “sea level at Sydney Harbour to rise approximately 0.0 cm over the past 140 years.”

To draw such a conclusion from a photo comparison is erroneous. As we have previously reported, these types of oversimplified memes are meant to discredit science without taking into account a number of environmental factors that may influence sea level in the area, including, as some social media users pointed out, the very simple fact that ocean tides fluctuate over predictable timeframes

Carly Shabot with California Sea Grant told Snopes that one “cannot compare photos without more information as they may have been taken at different tides or times.”

“Sea levels can appear higher or lower depending on the time, day and season each photo was taken,” added Shabot.

Because the meme did not provide further information about when the photographs were captured, as well as during which tide, using a comparison of the two pictures to make an argument is not credible.

Both images appear to feature Fort Denison, a heritage-listed part of Sydney Harbor National Park located in the eastern Australian city. The black-and-white image shows the fort as it stood in the 1880s, though some accounts note that the photo was taken in 1885, according to the National Archives of Australia. To say that the sea level in the Sydney, Australia region have not risen since the 19th-century is false. While sea level rise in that specific area is less than the global average, NOAA reports that the relative sea level trend is .75 millimeters each year, or .029 inches. It's an admittedly small level and one that may not be detectable by the naked eye, but it's a rise nonetheless.

Again, as we’ve previously reported, sea level around the planet is rising on average, but at very different rates, which depend on many factors, including ocean tides and currents. For more information about those many variables or about the history of sea level rise, you can check out this Snopes explainer: No, That Plymouth Rock Meme Doesn’t Disprove Rise in Sea Level.

For the reasons outlined above, we have rated this claim as “False.”

US Department of Commerce, National Oceanic and Atmospheric Administration. What Is the Difference between Local Sea Level and Global Sea Level? https://oceanservice.noaa.gov/facts/sealevel-global-local.html. Accessed 19 July 2022.

Correction [July 20, 2022]: Sydney Harbor is in eastern, not western, Australia.