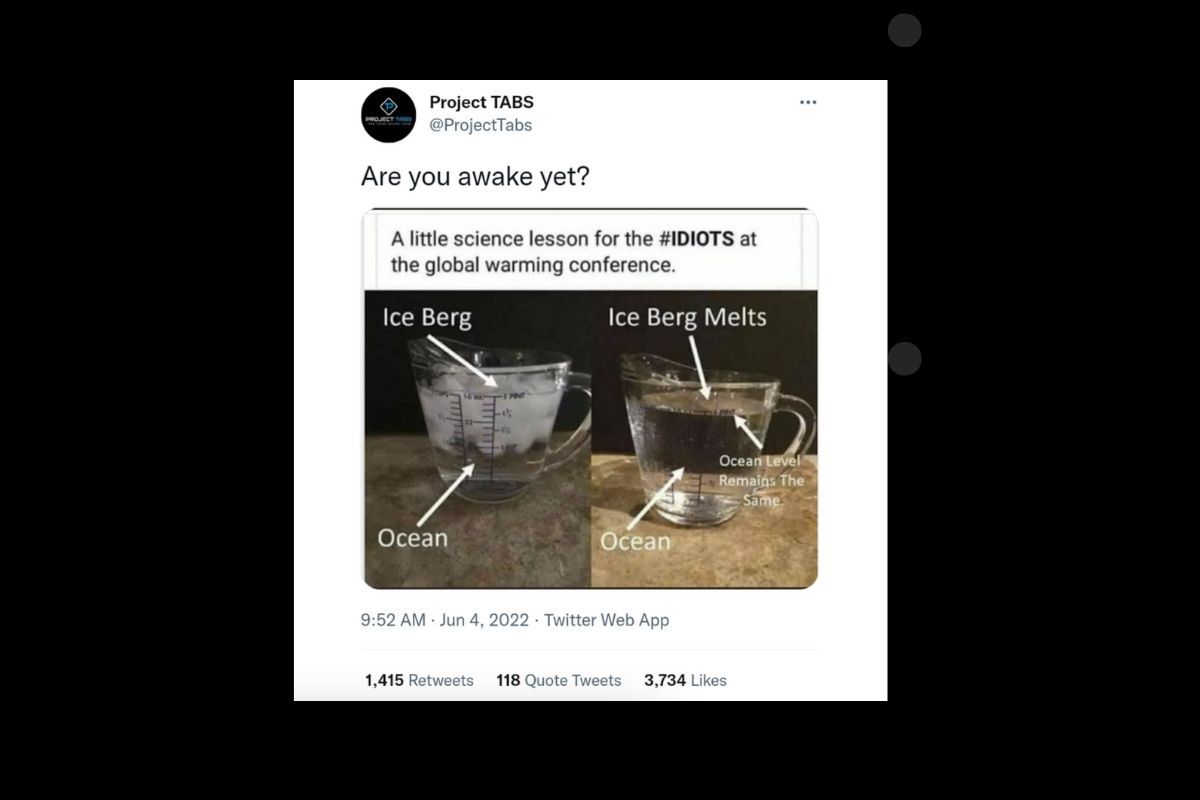 Claim:
A meme debunks climate change by showing that melting sea ice (represented by ice cubes) placed in a measuring cup does not contribute to sea level rise (represented by the unchanging water level of the cup).
Rating:

Though it is true that sea ice melt is not a large contributor to sea level rise, the measuring cup experiment is an inaccurate and oversimplified "proof." It does not debunk sea level rise or climate change, nor does it account for greater contributors of sea level rise (the melting of ice sheets and glaciers).

Earth’s climatic processes are complex and dynamic, including those that contribute to sea level rise by way of climate change. However, these complicated scientific processes are often oversimplified by nefarious characters to sow seeds of doubt and thwart action to avert climate change and its impact on humanity.

One such attempt is the below meme, which was originally shared to Twitter by the now-suspended Project TABS account on June 4, 2022. Our newsroom came across a screengrab of the Twitter meme shared to Reddit:

The meme purports to debunk climate change by arguing that melting sea ice (represented by ice cubes in a measuring cup) does not actually contribute to sea level rise (represented by the unchanging water level of the cup).

Here’s the problem with that meme: It’s an overgeneralization of intricate climatic processes that make our planet what it is. Carly Shabo with California Sea Grant told Snopes that while it is true that sea ice melt is not a major contributor to sea level rise, ice in other forms, such as that found in glaciers or on land, does. Snopes was referred to this blog written by Alison Gold of NASA’s Goddard Space Flight Center.

“Because sea ice forms from the seawater it floats on, it behaves much like an ice cube in a glass of water. Like that ice cube, which does not change the water level of the glass when it melts, melting sea ice in the Arctic does not dramatically change sea level,” wrote Gold.

“Melting land ice, for example from the Greenland or Antarctic ice sheets, does contribute to sea level rise. That’s because when land ice melts, it releases water that was previously trapped on land and adds to the water in the oceans.”

A majority of Earth’s fresh water is frozen in the form of glaciers, ice sheets, lakes, and rivers. Large bodies of ice, like glaciers and Antarctic ice sheets, once existed all year. But as temperatures rise, some glaciers are melting faster than they can accumulate snow, eventually contributing to the rise in oceanic sea levels. Here’s a more accurate at-home experiment created by NASA:

Icebergs and sea ice don't contribute so much to sea level rise because they are already in the water, and the amount of water displaced as ice is about the same as the amount of water added to the ocean when they melt. (Check out this NASA learning activity to see how that works.)

Heather Goldstone of the Woodwell Climate Research Center added that while the meme in question is not “entirely off,” we must recognize it for what it is: “a commonly used technique among those trying to sow doubt about climate science, in which they use one narrow, factually correct statement in a distorted way to suggest that all climate science should be called into question.”

“Melting sea ice does not contribute directly to sea level rise as floating ice is already displacing its volume; no climate scientist would claim otherwise. It is the movement of ice and meltwater from land-based glaciers and ice sheets into the ocean that directly increases ocean volume, and thus, sea level,” said Goldstone.

As we’ve mentioned, sea ice is its own form of frozen water. Typically, sea ice forms in cold winter months and partially melts away in the warmer months. These levels create what is known as the sea ice extent, or the area of ice that covers the Arctic Ocean at any given time. Over the last several decades, sea ice extent has declined at a rate of 13% every ten years, further accelerating its pace because of climate change-induced warming. To date, about half of sea level rise has been due to the addition of water to the ocean; the other half is due to warming and expansion of ocean water. We’d be remiss to leave out the ice-albedo feedback cycle, which explains how the white surface of ice reflects the warmth of the sun away from Earth. Sea ice acts as a “blanket” to shield the ocean from the sun. But as sea ice melts, there is less white surface to reflect the heat of the sun, which means that warmth is being absorbed by the ocean. Compounded by the thermal expansion of water — that water expands as it gets warmer — it is easy to understand why the Arctic is warming up to four times faster than the global average of sea ice.

One last point that we’d like to touch on is the fact that the two poles are very different, and one should not overgeneralize these massive regions by comparing them to a household measuring cup. The Arctic ice cap is all sea ice, whereas Antarctica is a land continent covered by the world’s largest ice sheet. (Greenland comes in second.) If the Antarctic Ice Sheet were to melt entirely, the National Snow and Ice Data Center estimates global sea level would rise about 200 feet. Greenland would contribute to a 20-foot rise.

But those are dramatized scenarios. Actual projections suggest that the planet will see a sea level rise of about 3 feet by the end of the century.

“Both the International Panel on Climate Change (IPCC) and the U.S. National Climate Assessment conclude that ice loss was the largest contributor to sea-level rise during the past few decades, and will contribute to rising sea levels for the century to come,” wrote NASA. A still image visualizing Arctic sea ice on Sept. 16, 2021, when the ice appeared to reach its yearly minimum extent. On this date, the extent of the ice was 4.72 million square miles. NASA's Scientific Visualization Studio

Arctic Sea Ice Is the Thinnest and Youngest It’s Been in 60 Years. www.youtube.com, https://www.youtube.com/watch?v=eFFvJYpg4xk. Accessed 8 July 2022.

Special Report on the Ocean and Cryosphere in a Changing Climate —. https://www.ipcc.ch/srocc/. Accessed 8 July 2022.