Plymouth Rock has a complicated and contentious history in the U.S. 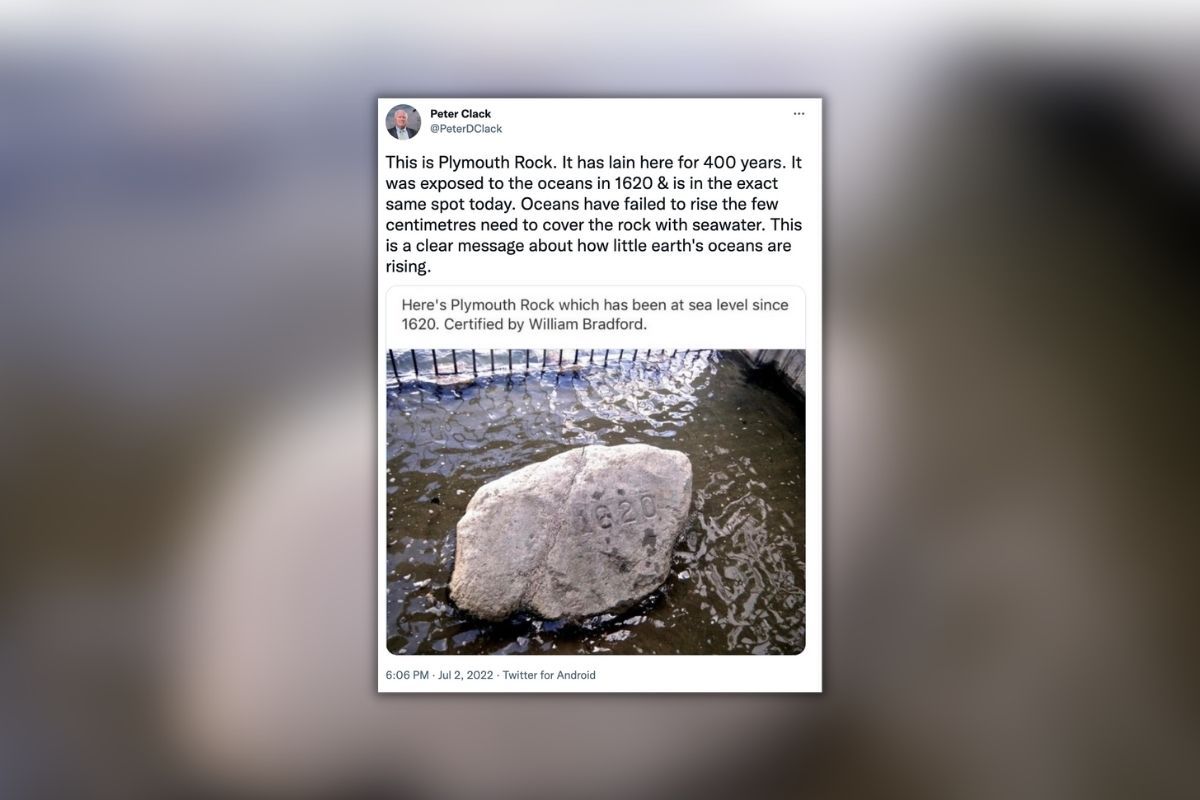 Plymouth Rock is an historical landmark with a complicated and contentious history. Through the centuries, historians have questioned its authenticity. And in the modern era, climate change deniers have used its location — which has changed several times — as purported evidence that sea level rising is a farce.

In July 2022, a meme shared to Twitter falsely claimed that the rock was “exposed to the oceans in 1620 and is in the exact same spot today.” At the time of this writing, that post had been shared nearly 11,000 times with over 28,000 likes.

As we’ve seen before, these types of oversimplified memes are meant to sow seeds of doubt in the confidence of science. Carly Shabot with California Sea Grant told Snopes that the answer is simple: The rock has been moved several times over the centuries.

For a quick history refresher, Plymouth Rock is the fabled location where William Bradford, a Pilgrim who would later become governor of Plymouth Colony, first set foot on North America. (Even that account isn’t accurate: The Protestant refugees first came ashore in what is now Provincetown on Cape Cod.) And of the two first-hand accounts of the Plymouth landing, neither mention the famed rock.

“There are no contemporary references to the Pilgrims' landing on a rock at Plymouth. There are two primary sources written by the Pilgrims themselves describing the landing in Plymouth in 1620, William Bradford's journal ‘Of Plymouth Plantation’ and the 1622 book popularly known as ‘Mourt's Relation,’” writes the Pilgrim Hall Museum.

"Both simply say that the Pilgrims landed. Neither mentions any rocks in their account of the landing. The first references to Plymouth Rock are found over 100 years after the actual landing.”

Indeed, for more than a century, information about the location of the rock was passed from father to son, and it wasn’t until 1741 when a pier was to be built that a 95-year-old man named Elder Faunce decided to bring the rock back to the shore:

Having pointed out the rock directly under the bank of Cole’s Hill, which his father had assured him was that, which had received the footsteps of our fathers on their first arrival, and which should be perpetuated to posterity, he bedewed it with his tears and bid to it an everlasting adieu.

In 1774, a team tried to move the rock from the shore and place it next to the town’s liberty pole. But before it could be moved, the National History of American Museum said it split in two.

“’The Mother Rock’ remained in place and the other piece of rock was moved into town. In 1880 the two pieces were reunited back on the shore and cemented together—but not before a number of pieces had been broken off for souvenirs or other purposes.”

In his 1990 New Yorker pieced titled, “Travels of the Rock,” author and former Princeton University Professor John McPhee described the rock as having been split “horizontally, like a bagel.”

Let’s look at the many times the rock has moved, as recorded by the Pilgrim Hall Museum:

Even if the rock had never been moved, Shabo says that it “definitely cannot provide an accurate measure of sea level rise.” Even so, there are records of the rock being underwater, including during King Tides.

That’s because on average, sea level is rising around the planet but at very different rates, which depend on many factors: subsidence, ocean currents, variations in land height, and whether the land is still rebounding from the compressive weight of Ice Age glaciers." Since 1880, sea level has risen between 8 and 9 inches. In 2020, global sea level set a record of 3.6 inches above 1993 levels — and that rate is accelerating.

In most of the 20th century, the annual rate of sea level rise was .06. That more than doubled for the time period between 2006 and 2015, to .14 annual inches, reports the Climate.gov Science Panel. Centuries is pocket change in the lifetime of Plymouth Rock. As a 2016 article published in Scientific American describes, the rock, like the Pilgrims, started its lifetime in another part of the world.

Plymouth Rock is a glacial erratic. Twenty thousand years ago, it was plucked up by the great glaciers that covered huge bits of North America, rafted considerable distances, and then deposited on a coast where human history would be made a long time later. You can see pieces of this rock in many places in New England. The portion of the glacial erratic left behind at Plymouth became the famous rock it is today.

Bottom line: Using Plymouth Rock as a reference for sea level rise is a faulty and oversimplified explanation. Not only has the landmark been moved several times over the last four centuries, but sea level rise is a complicated, global climatic process that takes into account a number of factors, including different rates at different locations.