'OMG, We Cooked a Pregnant Turkey!'

Don't be fooled by pranksters this holiday season. 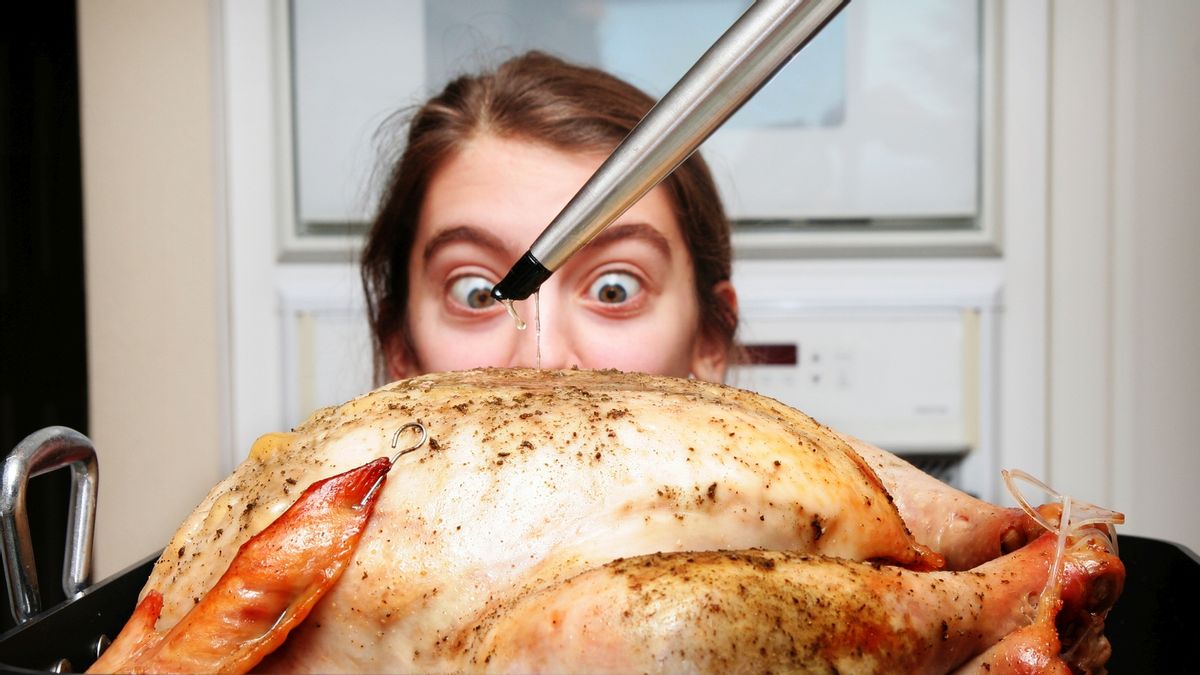 What terrors await inside the Thanksgiving turkey? (Image Via Getty Images/Stock Photo)

Claim:
As a Thanksgiving prank, cooks have stuffed their roast turkeys with Cornish game hens to convince gullible family members they were about to dine on a "pregnant turkey."
Rating:

Everybody knows that turkeys, like chickens, lay eggs and don't get pregnant, right? Well, not to shake anyone's confidence in human intelligence, but it appears that at any given time there are, in fact, a few of us who do not know that turkeys lay eggs -- hence the relatively new Thanksgiving tradition known as the "pregnant turkey prank," which any number of people have recorded themselves successfully pulling off in YouTube and TikTok videos like this one:

We're calling it a relatively new tradition because, as best we can determine, the pregnant turkey prank is no older than the internet itself. The earliest instance of it we've found is this brief set of instructions, posted to an internet forum in 1996:

Here's one for Thanksgiving:

Put a cornish game hen inside the turkey before you cook it. Tell the people at the table that it was pregnant. For the squeamish, a hard-boiled egg is almost as good!

In those days, before social media existed, people shared their memes and scarelore and funny stories via forwarded email, which is how we came upon this amusing little narrative in November 2000:

One year at Thanksgiving, my mom went to my sister's house for the traditional feast. Knowing how gullible my sister was, mom decided to play a trick. She told my sister that she needed something from the store and sent her for it. While she was gone, my mom took the turkey out of the oven, stuffed it, re-stuffed it with a Cornish game hen, put stuffing back over the top of it, and put it back in the oven.

When it came time for dinner, my sister pulled the turkey out of the oven and proceeded to remove the stuffing. When her serving spoon hit something, she reached in and pulled out this little bird.

With a look of total shock on her face, my mother exclaimed, "Patricia, you killed a pregnant bird!!" At the reality of this horrifying news, my sister started to cry. It took my mother two hours to convince her that turkeys lay eggs.

Whether it makes you laugh uproariously or sends you down a rabbit hole pondering the cruelty of parents, the turkey prank has proven staying power (check YouTube for dozens more video examples). Nor is it the only turkey-specific prank of its kind. We've also encountered many variants of the "turkey neck penis prank," which basically entails convincing one's kids that the raw, skinned neck of the turkey is actually the bird's penis. A variant of the penis prank turns up in an urban legend Snopes covered some time ago, except in this story it's the kids who prank the parents by arranging a raw turkey neck so it's hanging out of their sleeping father's pants. We won't give away the punchline except to say it involves a hungry house cat. Enjoy!