Unbelievable Turkey Stories to Share at Your Thanksgiving Table

We will always be thankful for this compendium of Thanksgiving turkey humor. 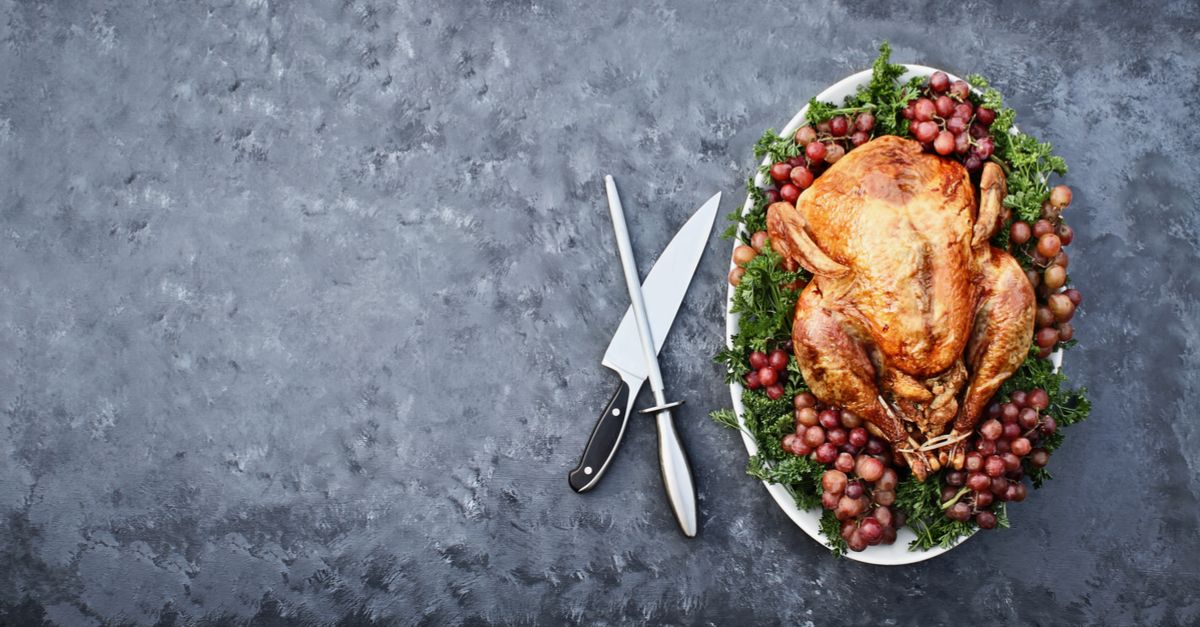 For a change of pace, we mark this years' observance of Thanksgiving with a few simple legends of holiday meal turkey preparations gone awry.

A woman who got it into her head that a fresh turkey produced a far superior meal to a frozen one made a trek out to a turkey farm to buy a live bird. But after returning home and looking square into the eyes of the living, breathing creature she'd just purchased, she just couldn't bring herself to kill it by wringing its neck or chopping off its head. Instead, she managed to put the turkey to sleep with chloroform and then began the process of dry-plucking it. Just as she finished removing the last of the feathers, however, the bird woke up.

The next-door neighbors responded to her shouts and arrived at her back door to find a woman being chased around her kitchen by an angry, naked turkey.

The next story, as told in 2006, deals with Christmas rather than Thanksgiving, but it's a turkey of a tale all the same:

Last year at Christmastime, my mom went to my sister's house for the traditional holiday feast. Knowing how gullible my sister is, my mom decided to play a trick. She told my sister that she needed something from the store and asked if my sister wouldn't mind going out to get it.

When my sister left the house, my mom took the turkey out of the oven, removed the stuffing, stuffed a Cornish hen, and inserted it into the turkey, then re-stuffed the turkey.She then placed the bird(s) back into the oven.

When it was time for dinner, my sister pulled the turkey out of the oven and proceeded to remove the stuffing. When her serving spoon hit something, she reached in and pulled out the little bird.

With a look of total shock on her face, my mother exclaimed, 'Barbara, you've cooked a pregnant bird!'

At the reality of this horrifying news, my sister started to cry hysterically. It took the entire family almost two hours to convince her that turkeys lay eggs!

Yes, my sister is a BLONDE.

We've also found a Thanksgiving-specific version of one of our favorite legends:

A young woman is preparing her first thanksgiving dinner. As she gets everything ready for Thanksgiving day, she very sternly reminds herself to let the turkey finish thawing in the sink overnight. She puts it in and places the dishrack over the top of the bird. Her husband walks into the kitchen and sees this."Why are you doing that?" he asks.

"My mom always did that to help the turkey thaw," she told him.

The next day Mom calls to see how everything is going.

"Fine, Ma. I have everything ready to go in the oven. I even remembered to put the rack over the turkey last night."

This seemed to confuse her mother a bit. "What are you talking about?" she asked.

"Oh, I remember you always put the dish rack over the turkey when it was thawing in the sink," she said.

There was a pause on the end of the line. "Yes, but honey, we had cats!"

Finally, a cute anecdote from 1934 that deals not with the preparation of a turkey, but the aftermath of its consumption:

Word has reached us of a happening on Thanksgiving in East Orange. It has long been the custom on such occasions to have the wishbone pulled by the youngest and the oldest present. This year it was Grandma and Charles, who is going on eight. Charles won, and, with a far-away look in his eyes, fell into a period of silence. One of his aunts prodded him, and asked what he'd wished for. Others at the board pressed the question persistently, and perhaps unfairly. Charles brooded for a moment and then told them. "I wished," he said, "that I could see a nekkid woman."