Does This NASA Photo Show a ‘Portal’ and ‘Wall’ on Mars?

It's either a door leading to another celestial dimension ... or part of a rock. 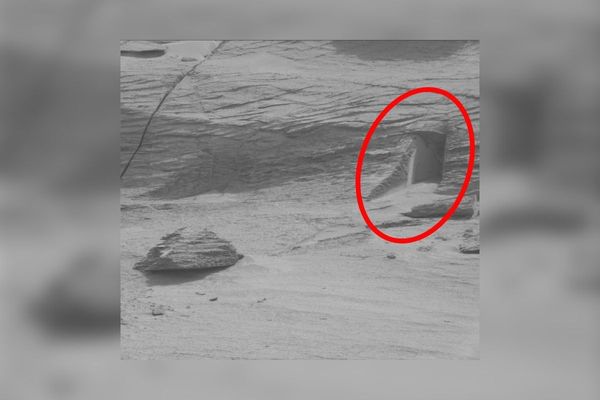 Claim:
A photograph captured by NASA’s Mars Curiosity Rover on May 7, 2022, showed a “portal and a wall nearby that looks artificial.”
Rating:

While the image in question was an authentic photo captured by a camera aboard the NASA Curiosity rover on May 7, 2022, the agency’s Jet Propulsion Laboratory told Snopes that, what some social media users interpreted to be a "portal and a wall," was actually a rock crevice on the red planet.

A popular May 2022 post on Reddit that claimed NASA’s Mars Curiosity rover captured a photograph of an alleged "portal" and a "wall nearby that looks artificial" on the red planet was as incredible as it seemed.

That was because while something depicted in the grainy, black-and-white version of the photograph taken by a camera aboard the rover could be interpreted to resemble the shape of a door, the agency’s Jet Propulsion Laboratory (JPL) told Snopes that it actually was a “very, very, very zoomed in shot of a tiny crevice in a rock.”

“The team’s scientists underlined just how small [the crevice] is: roughly 30 centimeters wide and 45 centimeters across (11 by 17 inches)," a JPL spokesperson said via email. "They said there are linear fractures throughout this outcrop, and this is a location where several linear fractures happen to intersect."

The photograph was taken by the Mast Camera (Mastcam) outfitted aboard Curiosity, a system that uses fixed-focal length, multispectral imagers to capture “true color” images of the red planet and beyond. The "door" image was captured on May 7, 2022, which is also Sol 3466 — the 3,466th solar day on Mars, or a Mars-day.

NASA media relations team also referred us to a publicly available, digital mosaic of photos that the rover also captured. Neville Thompson, who is not affiliated with NASA, created the piece, which showed contents of the in-question image within the broader marscape. The tiny “door” (crevice) can be seen roughly dead center, up a little, and a bit to the left.

“See it? You can zoom in with the +/- on the right side of the screen. It’s very small and looks like … a crevice in the rock,” the spokesperson wrote.

While we can't say for certain whether Martians indeed used itty-bitty, little doors, NASA was sure that the “door” in this instance was just a small rock crevice. So, while the Reddit post displayed an authentic photo captured by NASA's Mars Curiosity rover, the photo did not show either a portal or an artificial wall. As such, we rated this claim as “Miscaptioned.”

Want more fact checks about weird and wacky Mars rumors? Check out these:

“Does This Photo Show a Hole Drilled on Mars?” Snopes.Com, https://www.snopes.com/fact-check/photo-hole-drilled-on-mars/. Accessed 11 May 2022.

kinger90210. “NEW: 2022-05-07 A Formation on Mars Which Appears to Be a Portal and a Wall Nearby That Looks Artifical. Image Credits: NASA / JPL-Caltech. Mars Rover.” R/Interestingasfuck, 11 May 2022, www.reddit.com/r/interestingasfuck/comments/umyqdy/new_20220507_a_formation_on_mars_which_appears_to/.