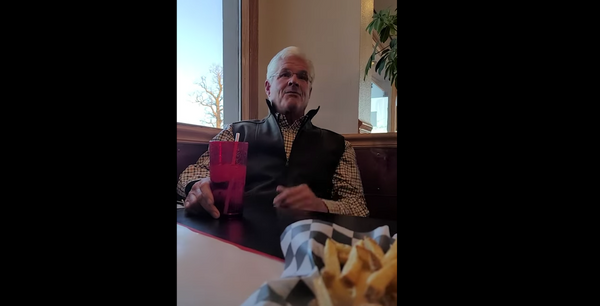 Claim:
During a lunch with leaders of the Hillsdale County Republican Party held on Feb. 3, 2021, Michigan state Senate Majority Leader Mike Shirkey suggested that the Jan. 6 riot at the U.S. Capitol was a “hoax.”
Rating:

A Michigan lawmaker is under fire for suggesting that the Jan. 6, 2021, insurrection at the U.S. Capitol — which resulted in the deaths of five people — was a “hoax” staged to reflect poorly on then-U.S. President Donald Trump.

Michigan state Senate Majority Leader Mike Shirkey was filmed during lunch on Feb. 3 with representatives from the Hillsdale County Republican Party, which he represents, pushing baseless claims that groups other than pro-Trump supporters were responsible for the violent siege at the nation’s capital. (We've debunked a number of related allegations here.)

The video, which was about an hour long, went viral after being first reported by the Detroit Metro Times on Feb. 9. The video of the lawmaker appeared to be captured on a handheld device and was shared to YouTube the same day by Reclaim Our American Republic (ROAR), a self-published news page headed by Hillsdale County Republican Party Secretary Jon Smith. Smith told Snopes that he did not tell Shirkey that he was recording, but that the lawmaker later said that he knew that he was being filmed.

“That wasn’t Trump’s people. That’s been a hoax from day one. That was all prearranged,” said Shirkey, who represents the 16th District. “It was arranged by somebody who was funding it… it was all staged.”

In a phone interview, Smith told Snopes that Shirkey had requested to speak with him and party Chair Daren Wiseley to defend his political censure planned for Feb. 4. The Hillsdale Republican Party voted to censure Shirkey for his expressed views, including the “condemnation of peaceful protestors at the Capital, publicly calling them a ‘bunch of jackasses.’”

In response to his own party censuring him, Shirkey said that he didn’t “give a shit,” according to the Detroit Metro Times.

“I think it’s a very sad and somber video. I think it’s a sad disconnect between the average person and government,” Smith told Snopes describing the Shirkey video. “The [Republican] party is in a lot of ways, splintered, and I don’t think it’s any different from the Democrat party. They are splintered as well. We’re just seeing things polarized so much and I don’t know what the fix is per se, but what we do know is that we have to get people out of office that misrepresent our party.”

“I said some things in a videoed conversation that are not fitting for the role I am privileged to serve. I own that. I have many flaws,” he wrote in a statement. “Being passionate coupled with an occasional lapse in restraint of tongue are at least two of them. I regret the words I chose, and I apologize for my insensitive comments.”

But on Feb. 10, Michigan journalist Simon Shuster reported in a tweet that the state senator backtracked on his apology. In his post, Shuster noted that Shirkey “appeared to stand by the assertion that supporters of former President Trump did not instigate the Jan. 6 riot at the U.S. Capitol.”

“I frankly don’t take back any of the points I was trying to make. Some of the words I chose I do regret,” Shirkey reportedly said. “The FBI is going to identify here within the next couple of weeks who was actually behind it.”

Nick Friend, a multimedia journalist with Michigan NBC affiliate WLUC TV6, shared a full exchange of the video that showed Shirkey on the Michigan Senate floor as he continued to claim that the riot was “planned weeks and months in advance by someone.” Snopes contacted Shirkey’s office by email for further clarification regarding his follow-up comments but did not receive a response at the time of publication. We will update the article accordingly.

“When you get people like that that misrepresent your party, since he’s in a very powerful seat and a very powerful position as a long-term politician, that’s labeled as Republican. I’m sorry, but that’s not Republican,” said Smith. “This does not represent us.”