Deception helps terrorist groups innovate by allowing them to learn, master and experiment with new tactics while protecting their identities and reputation. 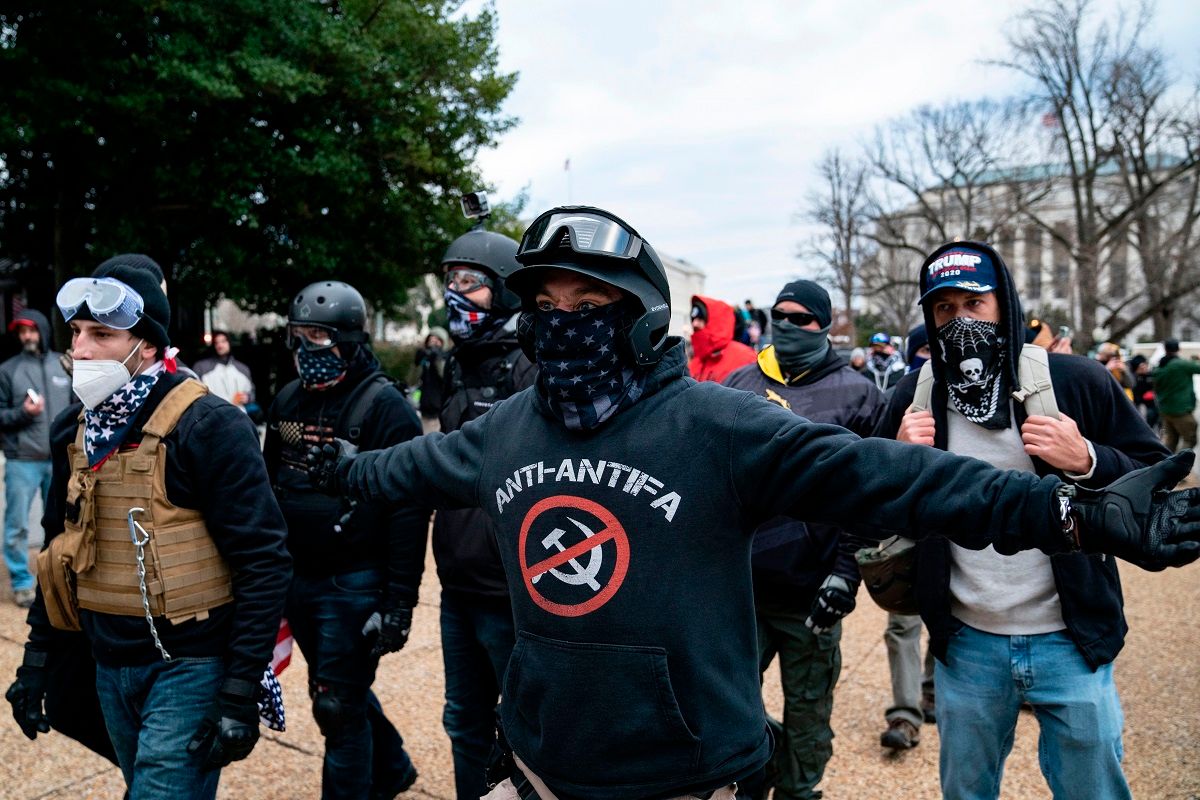 This article about terrorist groups is republished here with permission from The Conversation. This content is shared here because the topic may interest Snopes readers; it does not, however, represent the work of Snopes fact-checkers or editors.

The FBI negated the baseless claims, and people have recognized the conspiracy theory as a false flag – an act designed to disguise the actual source or responsible party and implicate another.

In contrast, members of extreme right-wing groups like the boogaloo movement and the Proud Boys did in fact infiltrate the George Floyd protests this summer, trying to spark violence between Black Lives Matter protesters and police.

And at the Capitol, it appears Proud Boys members hid their affiliation to better blend in with the crowd.

As an expert on terrorist tactics and propaganda, I am well acquainted with the idea that far-right militants sometimes try to hide their own identities.

Terrorist deception is an age-old tactic. Deception helps terrorist groups innovate by allowing them to learn, master and experiment with new tactics while protecting their identities and reputation.

The guise of mimicry

The most obvious form of deception – mimicry – is emulating the specific tactics and strategies of other groups.

The history of suicide terrorism, for example, is replete with examples of contagion and mimicry. Suicide terrorism spread from Iran to Lebanon to Sri Lanka to the Palestinian territories. It has been used by at least 58 different groups in 35 countries.

Just as plants and animals mimic other species to lure prey or hide from predators, mimicry enables violent groups to portray themselves in a variety of guises for both offensive and defensive purposes.

Mimicry might involve imitating actions or behavior. An al-Qaida member in Europe, for example, might disguise himself by drinking alcohol, going to strip clubs or gambling. This deceptive signaling can help him move easily among Western targets and not raise suspicion.

Mimicry can also be changing one’s physical appearance. In the case of terrorist operations, groups blend into their surroundings, or don the uniforms of rival groups to sow confusion. They might change their looks and attire to mimic something less threatening – for example, a pregnant woman – to evade detection or invasive searches.

In 2005, Raghab Ahmad ‘Izzat Jaradat of the Palestinian Islamic Jihad armed group detonated an explosive belt aboard a bus near Haifa, Israel. He wore an Israeli army uniform and carried a conscript bag to avoid drawing attention. This became a common tactic used by Hamas militants to infiltrate Israeli hard targets.

Deception can also take the form of mimicry when a group makes a false claim of responsibility or attributes a failed operation to their enemies or rivals.

Willingness to claim responsibility or allocate blame depends on whether violent tactics are popular or unpopular with their constituency of supporters and whether they succeed or fail. The Islamic State, for example, rarely claimed responsibility for failed attacks.

Al-Qaida didn’t immediately claim responsibility for the 9/11 attacks, although subsequent statements and comments left no doubt as to their culpability. The reasons for this reticence relate to their goals at the time: to demoralize the West, galvanize Muslim extremists and instigate armed conflict with the West in Afghanistan and elsewhere. From this perspective it didn’t matter which faction perpetrated the attacks.

These videos branded Hamas’ ownership of attacks and undermined the reputations of rival groups who falsely claimed the attacks as their own. This innovation is now a norm and has changed the way terror groups convey ownership.

The Jan. 6 attack at the Capitol was not antifa. The arrests thus far have been dedicated Trump supporters, based on their social media posts.

But in the ultimate form of deception, a post allegedly from the Department of Justice’s acting pardon attorney appeared on Parler, the now-suspended social network app popular with the far right and people who’ve been kicked off of Twitter. It requested individuals who had stormed the Capitol to provide their name, address, license information and details of what they did that day in order to receive a pardon.

The real Justice Department hastily issued a statement advising Trump supporters that “the information circulating on social media was inauthentic and should not be taken seriously.”

A few days later, the FBI opened numerous investigations of assault and seditious conspiracy based in part on information gleaned from social media.

Mimicry is both offensive and defensive. Just like with predators and prey in nature, when it comes to acts of terrorism, what you see is not always what you get.