Did Marjorie Taylor Greene Confront a Parkland Shooting Survivor and Call Him a 'Coward'?

The Republican congresswoman from Georgia has come under scrutiny for her promotion of harmful and baseless conspiracy theories, and inflammatory language. 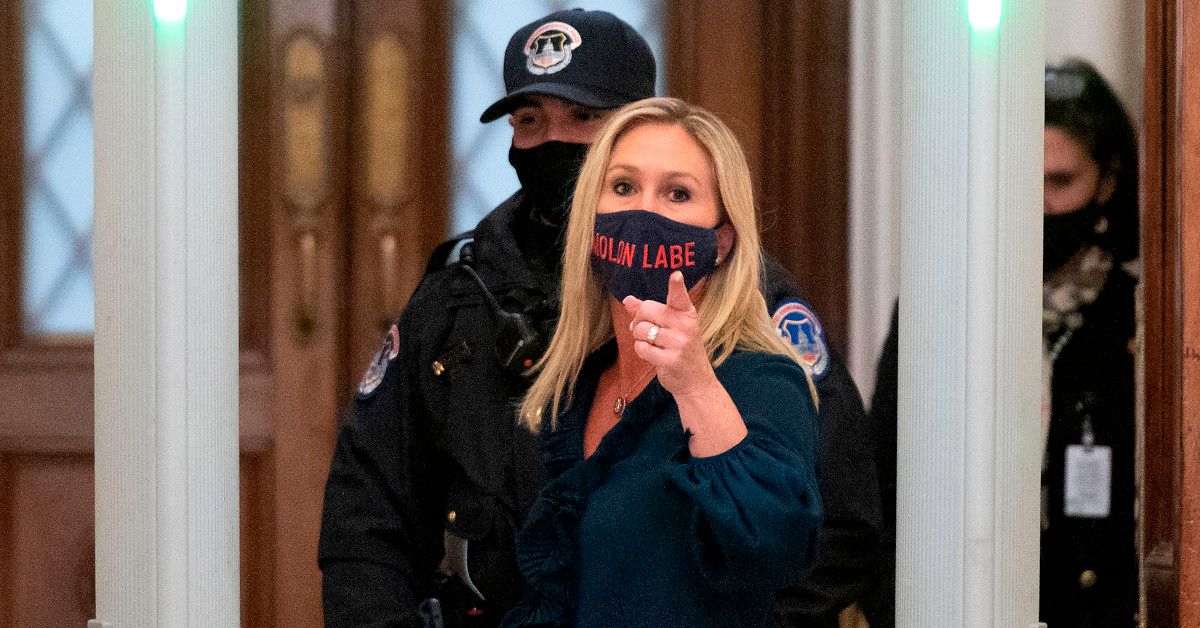 In January 2021, after the 118th Congress was sworn in, attention turned to the record and background of U.S. Rep. Marjorie Taylor Greene, a Georgia Republican, who promoted the far-right QAnon cluster of conspiracy theories and gained the support of former President Donald Trump during her campaign.

On Jan. 19, left-leaning Media Matters for America revealed that in 2018, Greene had explicitly endorsed the false and damaging conspiracy theory that the Parkland mass shooting, which left 17 people dead at Stoneman Douglas High School in Parkland, Florida in February 2018, had been faked in order to justify a crackdown on gun rights.

A week later, CNN reported that Greene had "liked" Facebook posts that called for the assassination of high-profile Democratic politicians. In response, Greene said those particular actions had been taken by other unnamed individuals who have managed her Facebook page.

On Jan. 27, social media users began sharing a video which they described as showing Greene harassing or confronting David Hogg, a former Stoneman Douglas High School student and survivor of the mass shooting there, who has gone on to become a gun control activist. Since 2018, Hogg has been a frequent target of disinformation and baseless conspiracy theories for his role as a public advocate on behalf of those killed in the Parkland massacre.

Fred Guttenberg, whose 14-year-old daughter Jaime was murdered in the shooting, posted the video clip along with the following caption:

[Marjorie Taylor Greene], is this you harassing [David Hogg] weeks after the Parkland shooting, that my daughter was killed in & he was in? Calling him a coward for ignoring your insanity. I will answer all of your questions in person. Get ready to record again. A similar, widely-shared tweet was posted by the journalist Yashar Ali, who wrote that the video showed Greene "trolling" Hogg.

Those descriptions were accurate. The woman at the center of the video was indeed Greene, and the man who was the subject of her ire was indeed Hogg. Greene posted the video to her own YouTube account in January 2020, and it remained published there at time of writing. However, the video was recorded during Greene's visit to Washington, D.C., in March 2019. The confrontation in question did not take place mere "weeks" after the Parkland massacre, as Guttenberg claimed, but rather just over a year later.

In fact, Snopes has uncovered evidence that Greene followed and harangued Hogg on two separate occasions during that visit. Her purpose was ostensibly to lobby members of the U.S. Senate and House of Representatives to oppose "Red Flag" gun laws, which authorize law enforcement agencies to exercise emergency gun confiscation powers in cases where an individual is flagged by loved ones as being at immediate risk of doing serious harm to themselves or others.

The first confrontation took place on March 25, 2019, and was streamed live on Greene's Facebook page. The video has since been removed, but a cached version shows that Greene described it as having taken place inside U.S. Senate offices, called it "a surprise David Hogg confrontation," and said "This was the first one when we came across their group inside."

Later that day, Greene conducted an interview with Will Johnson, a far-right social media personality who once had his own show on the conspiracy theorist platform Infowars, and now runs a platform called "Unite America First." That interview contained a clip from Greene's confrontation with Hogg (apparently the one streamed live on Greene's Facebook account earlier that day).

In prefacing the footage, Greene complained that Hogg and his fellow activists appeared to have garnered more media coverage than her, and expressed frustration that he appeared to have been able to secure a greater number of meetings with senators and representatives while she, in many cases, found lawmakers unwilling to meet with her, or did not receive any response to her requests. At one point, Johnson calls Hogg "pretty despicable," to which Greene responds "Yes."

At the time of the confrontation, Hogg was 18 years old. His youth clearly appears to have been a consideration for Greene, who told Johnson she had checked his Wikipedia page and found he was 18 years old which meant, in her view, "I'm not picking on a kid."

In the footage itself, which can be viewed below, Greene can be seen following Hogg and his associates through hallways amid U.S. Senate offices. Hogg never demonstrates any willingness to speak with Greene, and the confrontation appears entirely uninvited and unsolicited on his part.

Nonetheless, Greene continues to follow Hogg, shouting a series of questions and statements at him about gun control policy, red flag laws and, provocatively, the Parkland shooting itself, of which Hogg is himself a survivor. At one point, Greene shouts at Hogg, "If the FBI had followed through on their tips, then Nikolas Cruz wouldn't have been able to kill 17 people in the Marjory Stoneman Douglas High School."

Later in the video, Greene assails Hogg for his youth and supposed naivety, in an apparent contradiction of her earlier explanation that, since Hogg was 18 years old, he should be treated as an adult: "David Hogg, you don't even know what you have. You're so young you cannot realize that the right to bear arms is what makes America so great."

The second confrontation is the one shown in the videos posted by Guttenberg, Ali and others in January 2021. Based on descriptions contained in a Big League Politics report, it appears to have taken place later on the same day, Mar. 25, 2019.

The video, as posted to Greene's YouTube channel, can be viewed below. It again shows Greene following Hogg, this time outside on a sidewalk, shouting questions and statements at him. Again, she makes provocative pronouncements about the mass shooting which Hogg himself survived, and accuses him of "using kids as a barrier."

At no point does Hogg engage with Greene, or respond to her, much to the visible frustration of the future Congresswoman. After she ends her pursuit of Hogg, Greene turns to the camera and says "He's a coward, he can't say one word to defend his stance, because there is no defense for taking away guns."

In the days after her brief visit to Washington, D.C., Greene repeatedly advertised and promoted her confrontations with Hogg on Facebook and Twitter.

Reacting to the renewed coverage of the footage in January 2021, Lauren Hogg — a sister of David's and herself a survivor of the Parkland shooting and a gun control activist — wrote on Twitter that:

"The harassment that [David Hogg] and I received in the aftermath of the shooting was so severe that I have more PTSD from the harassment and conspiracy theorists that we’ve had to deal with with than I do going through the actual shooting."