Did a Parkland Shooting Survivor Say 'Generations Before Us Don't Know What It's Like to Be Shot at by AR-15s?'

A number of outlets used a hoax quote to paint David Hogg as hopelessly ignorant of history. 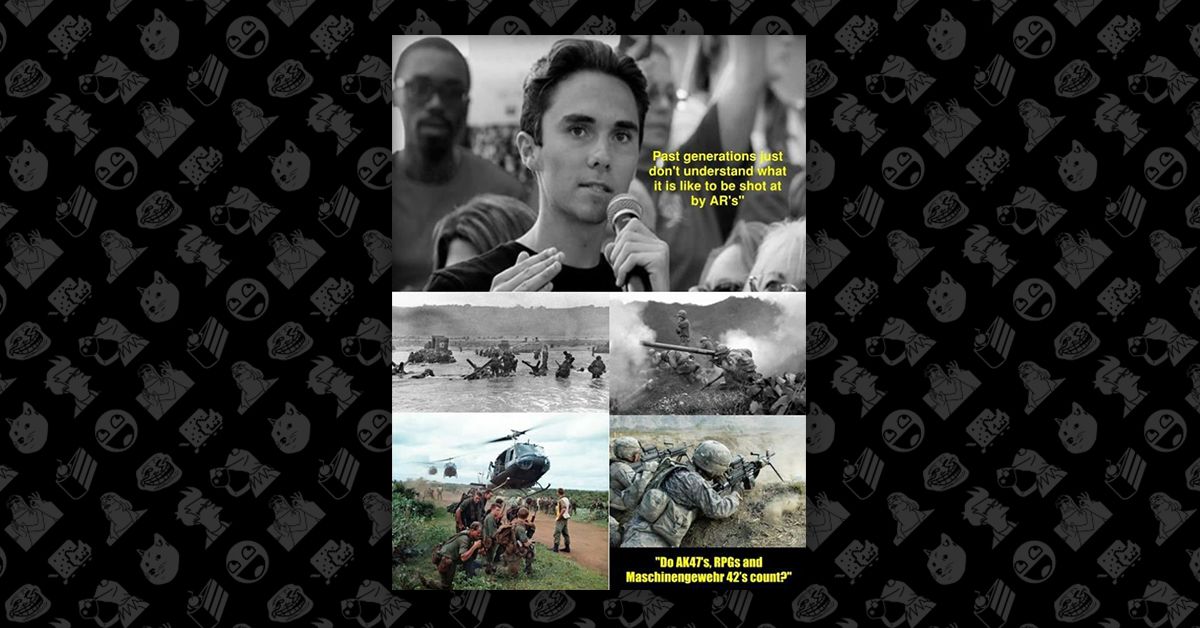 Claim:
David Hogg said that generations that came before his don't know what it's like to get shot at by AR-15s.
Rating:

High school student David Hogg, who survived a mass shooting in February 2018 to become an advocate for more stringent gun control laws, has been the subject of several conspiracy theories and smear campaigns as a result.

Hogg has been accused of being a "crisis actor,"  of delivering a Nazi salute during a speech, and of lying about his whereabouts during the shooting, in which a gunman entered the school and ultimately killed seventeen people and injured many more. (None of these stories about him are true.)

At the end of March, conspiracy theorists started another spurious rumor about Hogg, this time claiming that the gun control activists had ignored combat veterans who fought in previous wars when he allegedly said that "generations before us don't know what it's like to be shot at by AR-15s": One common attack tactic directed at surviving Parkland students arguing for gun control seems to be that the teenaged activists do not know enough about guns, gun control, or the world in general to be a credible voice in that debate. This meme plays on that theme as it insinuates that Hogg is ignorant of America's history in war. (The bottom picture was taken during World War II; it shows American reinforcements landing at Normandy.)

What are they teaching in history classes. He didn’t get it...still doesn’t, it appears. Pray for him and many like him...for eyes to open.

There's only one problem: Hogg never actually made this statement.

The earliest version of this meme that we could find was posted on 30 March 2018 by a Facebook page called "The Great American Movement." That posting contained no information about where or when Hogg allegedly made this statement. The photograph of Hogg in this particular meme was taken during his speech at the March for our Lives event, but this quote was not included in those remarks:

Although this meme has been reposted several additional times, we've yet to encounter any iteration claiming to know when, where, or in what context Hogg made this remark.

A second version of this meme contains a slight variation of this alleged phrase: The second version of this meme used a photograph of Hogg speaking at a gun control rally outside of a courthouse in Fort Lauderdale, Florida on 17 February 2018. This quote does not appear in that speech either:

In fact, he said nothing like this in any of the very public statements he made between surviving the Parkland school shooting in mid-February 2018 and this meme appearing (on the heels of so many others) just six weeks later.

Hogg has been critical of the previous generation (he once said that "our parents don’t know how to use a fucking democracy, so we have to"), but this quote appears to have been invented from whole cloth in an attempt to reinforce the idea that Hogg is unqualified to talk about gun control.