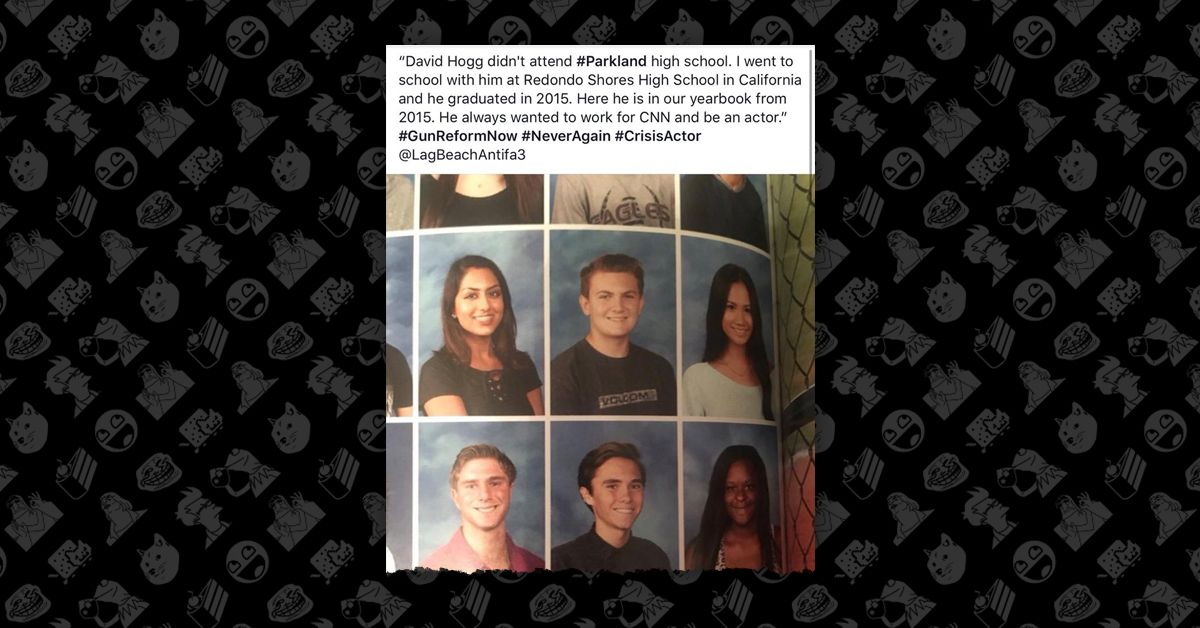 In the weeks after a gunman opened fire at Marjory Stoneman Douglas High School in Parkland, Florida on 14 February 2018, killing seventeen people, Internet trolls and "hoaxers" continued to share an already completely debunked rumor that David Hogg — a teenaged survivor of the mass shooting who has since become an outspoken advocate of gun control — is actually a professional actor who went to school in southern California: As Hogg's classmates have pointed out and as we reported previously, the above meme is a very low-quality, low-effort Internet hoax — the photograph actually confirms that Hogg is legitimately an Marjory Stone Douglas High School student because the image was taken from MSD's yearbook, a fact that could be gleaned from another student in the very same image wearing an MSD "Eagles" mascot shirt two rows above him:

There’s a photo going around claiming David Hogg did not attend Douglas, but a school in California. Here’s a video to debunk that: pic.twitter.com/hJsMNSdAsF

Hogg had visited California in 2017 and witnessed an altercation, about which he made a video blog — a simple fact that was blown out by conspiracy theorists to mean he already lived in Los Angeles and was part of the entertainment industry. (Hogg did live in California, but relocated with his family to Florida before starting high school; he returns to visit every year, as many people do.)

Nikolas Cruz, 19, a former Marjory Stone Douglas student who used an AR-15 semi-automatic firearm he had reportedly purchased from a gun store to carry out the mass shooting, has since been charged with murder; Parkland students have galvanized a national movement calling for stricter gun legislation. Hogg has been one of the most vocal leaders in what has become known as the "March For Our Lives."

The students' activism has made them the target of "hoaxers" — deranged Internet users and grifters who spread false information that mass shooting incidents are manufactured by the government to seize guns and hand power to a secret global cabal working to install an authoritarian world government.

Such hoaxers have periodically been arrested and jailed for physically stalking and harassing survivors, but despite their outlandish beliefs and apparent moral debasement, they are not exactly the "fringe." Far-right web sites and Internet personalities like GatewayPundit.com writer Lucian Wintrich, undeterred by ongoing lawsuits related to previous conspiracy theory-related blunders, have claimed the Parkland students were reading from scripts, while the National Rifle Association said in an official statement in response to a nationwide march on 24 March 2018 that the events were staged by "Hollywood elites."