The man photographed wearing horns at the siege on the U.S. Capitol is apparently not new to politics. 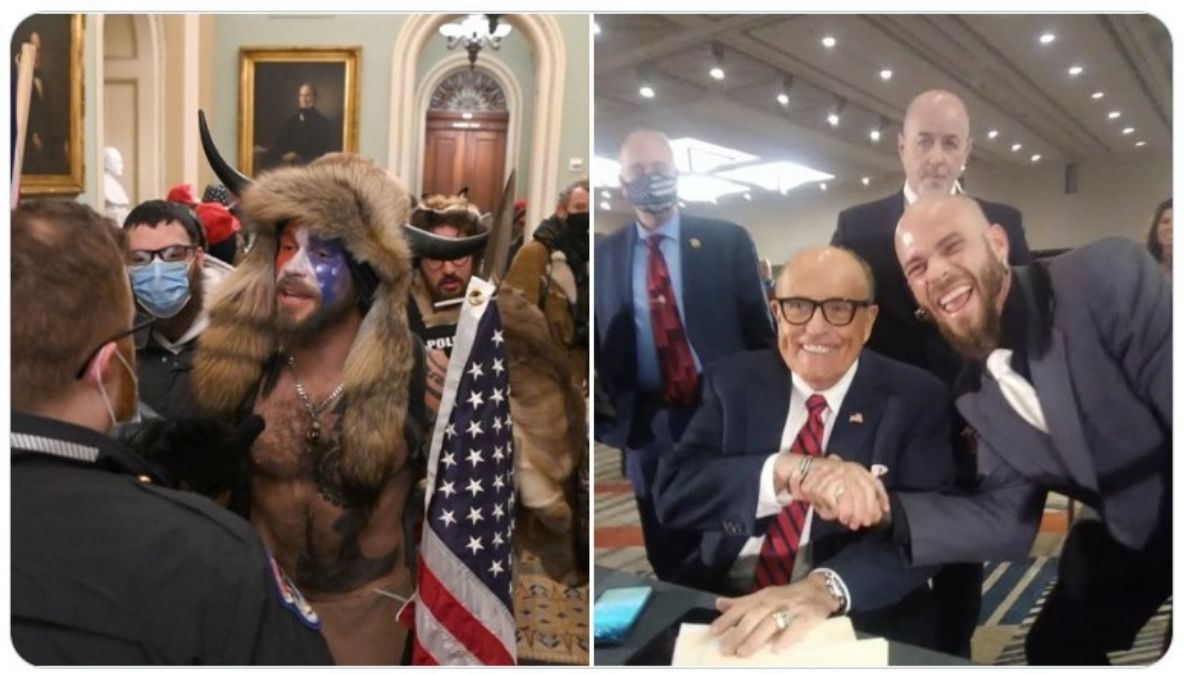 In the days following a riot at the United States Capitol by a pro-Trump mob on Jan. 6, 2021, a photograph started circulating on social media that supposedly showed U.S. President Donald Trump's personal attorney Rudy Giuliani with Jake Angeli, a QAnon supporter known as the "QAnon Shaman" who stormed the building in a fur-covered, horned hat that some described as a "Viking" helmet: Both of these photographs are real.

The image on the left was taken on Jan. 6, 2021, as a pro-Trump mob forced their way into the Capitol, an incident that would end with five people, including a police officer, dead.

The image on the right was taken at the Hyatt Regency in downtown Phoenix on Nov. 30, 2020, as Giuliani convened an unofficial "hearing" to discuss false allegations of voter fraud. AZ Central reported at the time:

The Great Arizona Quest to Uncover a Conspiracy continued on Monday as nine Republican legislators convened a “hearing” into voter fraud in the state’s election.

Trump lawyer Rudy Giuliani urged the Republican-run Legislature to throw out the results of the election and seize control of the state’s 11 electoral votes.

“In your state, a lot of the fraud had to do with the mail-in system as it did in other places,” Giuliani told the self-appointed panel.

Angeli shared this image to his Facebook page shortly after the event. While Angeli's Facebook page has since been deleted, an archived version can be seen here and a screenshot of the post is included below: It should be noted that taking a photograph with someone is not indicative of any meaningful relationship. In fact, a video of the event shows that Angeli's meeting with Giuliani was rather brief. Angeli was one of several people who approached Giuliani during a recess period of the hearing to shake his hand and take a picture. While it's a bit difficult to see, Angeli and Giuliani's brief meeting can be glimpsed at the 4:47:50 mark of the following video:

While the above-displayed photograph does not indicate that Giuliani and Angeli had any meaningful relationship, it does suggest that Angeli, who stormed the U.S. Capitol, was a supporter of Giuliani's efforts to overturn the results of the 2020 election. It should also be noted that a few hours before the pro-Trump mob stormed the Capitol, Giuliani delivered a speech at Trump's rally in which he made false allegations of voter fraud and called for "trial by combat."

Over the next 10 days, we get to see the machines that are crooked, the ballots that are fraudulent. And if we’re wrong, we will be made fools of. But if we’re right, and lot of them will go to jail. So, let’s have trial by combat.