Was Capitol Rioter in Horns and Furs an Antifa Instigator Who Took Part in BLM Protests?

Conspiracy theorists jumped into action when the unmistakable figure of Trump supporter and QAnon proponent Jake Angeli appeared at the U.S. Capitol riot. 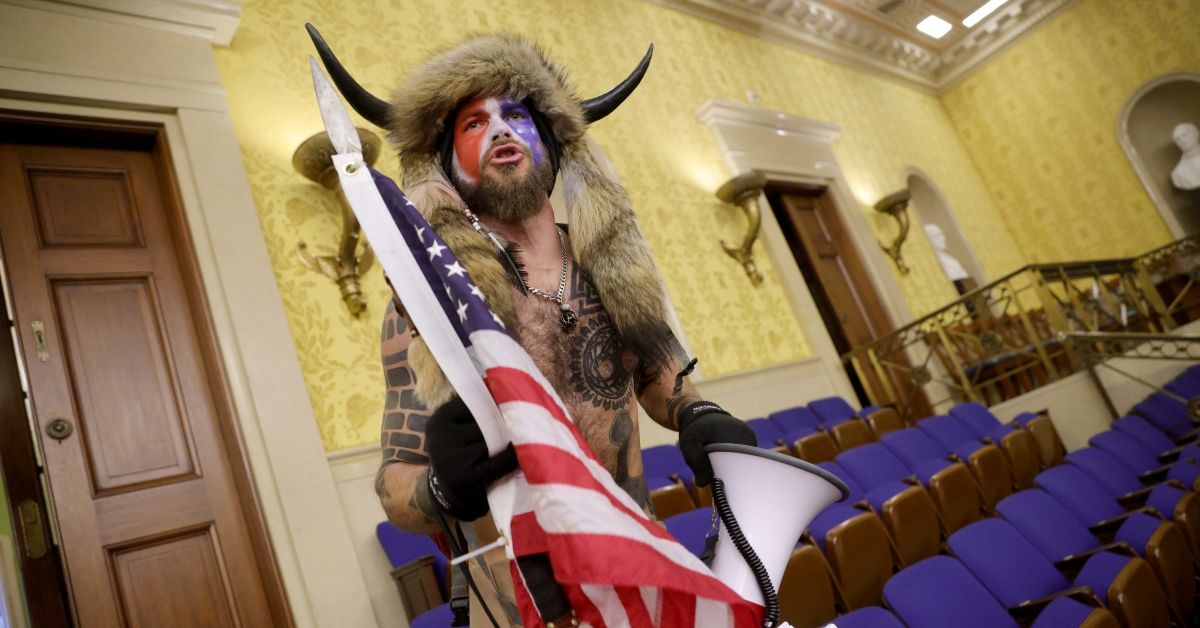 Claim:
A photograph showed U.S. Capitol rioter Jake Angeli taking part in a Black Lives Matter march, thus proving he was an instigator and not a Trump supporter.
Rating:

Angeli was photographed at a Black Lives Matter demonstration in Arizona in June 2020.

Angeli did not join in the message of the BLM protest but rather went there to recruit followers of U.S. President Donald Trump and the QAnon conspiracy theories, both of which he has a long record of supporting.

In the aftermath of unprecedented rioting in the U.S. Capitol building on Jan. 6, 2021, attention turned to identifying those responsible, many of whom were photographed in the course of their criminal actions, and some of whom even recorded their own involvement in selfies and social media live streams.

One of the individuals who featured prominently in press photographs and video footage from the rioting was a shirtless man who wore horns and furs on his head and had a painted face and tattoos on his body.

Beginning on the afternoon of the riots, social media users and conspiracy theorists shared photographs of the man, Arizona resident Jake Angeli, juxtaposed to suggest that he had previously taken part in demonstrations organized by the Black Lives Matter (BLM) movement and therefore was not, in fact, a supporter of outgoing U.S. President Donald Trump, but rather an agent provocateur or adherent to the antifa (anti-fascist) movement, seeking to discredit Trump supporters and efforts to overturn the victory of President-elect Joe Biden in the Nov. 3, 2020, presidential election.

The claims relating to Angeli formed part of a broader conspiracy theory of antifa and other "leftist" agitators infiltrating the mob of Trump supporters. As we outlined previously, proponents of these theories even falsely claimed that facial recognition technology had been used to positively identify the supposed antifa instigators.

On Facebook, users widely shared a screenshot that included two photographs of Angeli, along with the caption "AZ [Arizona] BLM rally in June, DC Capital [sic] in January": Some social media users explicitly presented the photographs as proof that Angeli was "antifa" and "not MAGA." In reality, Angeli is an enthusiastic supporter of Trump with a long public record of promoting the bizarre and baseless "QAnon" cluster of conspiracy theories.

The photograph on the right of the tweet — which was originally published by Trump supporter Cari Kelemen — showed Angeli taking part in the Capitol riots on Jan. 6, 2021. It was cropped from a larger photograph taken by Saul Loeb and published by Getty.

The photograph shown on the left of the widely shared screenshot did show Angeli at a BLM demonstration in the summer of 2020, but it was cropped to occlude the fact that he was carrying a pro-QAnon sign, and failed to mention that Angeli had reportedly gone there not to take part in the main event, but to recruit others to his causes.

It appears to have been taken by Brett Lewis, who emphasized on Twitter on Jan. 6 that Kelemen and others had misleadingly cropped it so that it no longer showed the QAnon-themed placard that Angeli was holding at the time. Lewis further explained that Angeli attended the BLM march in order to instigate conflict, not to join in the messages of other participants: On his YouTube channel, Angeli has promoted a range of bizarre conspiracy theories, including some related to alien life, "spiritual warfare," child sex trafficking cabals, Bill and Hillary Clinton, and "globalist elites."

On the social networking website Parler, Angeli described himself as a "shamanic practitioner" and "QAnon digital soldier," and largely posted links to his own YouTube videos.