According to the Old Testament, the Nephilim were were the offspring of the "sons of God" and the "daughters of men" before the Deluge. 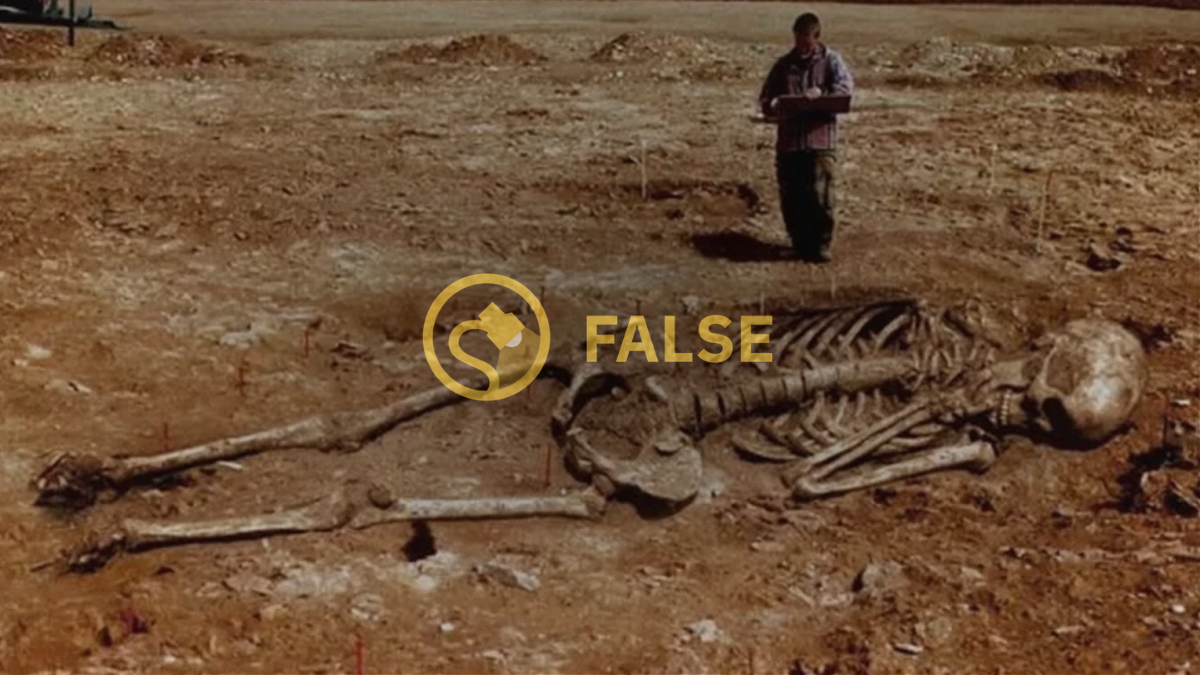 A collection of photographs purportedly showing the remains of giant humanoids, dubbed the "Canaan" or "Nephilim" skeletons, have been making the internet round since as far back as 2004: The images were assembled from various individual hoaxes that presented them with varying back stories sourcing them to recent archeological discoveries in the Mediterranean (e.g., Greece), the Middle East (e.g., Iran, Saudi Arabia), or India, and tying them to Biblical accounts of giants:

This is my first time seeing this even hearing about it. A long time friend of mine sent it today. The best I can tell is that it is the area of the Greek Hellenistic influence around the time when Alexander The Great died in 323 BC. When David slew Goliath of Gath, he was reported to be a Philistine. The Bible isn’t detailed except to say Goliath had 4 kinsmen and maybe these are some of his kinsmen or countrymen as mentioned, rather than just a big Philistines.

giants from the days of the bible ...

I thought this was really cool, how scientist keep finding proof of biblical stories!

Remember the old testament story of how the Israelites were afraid because of the GIANTS in the land of Canaan.

Numbers 13:33 "There we saw the GIANTS (the descendants of Anak came from the GIANTS); and we were like grasshoppers in our own sight, and so we were in their sight.”

These photos are from a recent archialogical [sic] dig in Greece. They discovered the skeletal remains of these giants that prove the Bible true.

Of course, none of these supposedly remarkable archeological discoveries has ever found its way into a museum or the pages of a scientific journal. Like multiple other instances of giant skeleton and skull photographs, these images are all digital manipulations, often ones created for Photoshop contests hosted by various websites.

The two pictures on the right-hand side of the top row, for example, are manipulated photographs of a 1993 University of Chicago dinosaur dig in Niger to which someone has added an image of a giant skull. No such skull appears in the original photographs: In a 2007 article, National Geographic offered an account from the creator of a similar "giant skeleton" hoax photograph:

IronKite started with an aerial photo of a mastodon excavation in Hyde Park, New York, in 2000. He then digitally superimposed a human skeleton over the beast's remains.

The later addition of a digging man presented the biggest technical challenge.

"If you look, he's holding a yellow-handled shovel, but there's nothing on the end," IronKite said.

"Originally, the spade end was there. But [it] looked like it was occupying the exact same space as the skeleton's temple, making the whole thing look fake.

"Now it looks like he's just holding a stick, and people don't notice. It's funny."

IronKite also altered the color of the man's clothing to create a "uniform tie-in" with the white-shirted observer peering down from the wooden platform.

The two figures work to exaggerate the scale of the skeleton, he added.

IronKite said he's tickled that the picture -- which took only about an hour and a half to create -- has generated so much Internet attention.

"I laugh myself silly when some guy claims to know someone who was there, or even goes so far as to claim that he or she was there when they found the skeleton and took the picture," IronKite said.

"Sometimes people seem so desperate to believe in something that they lie to themselves, or exaggerate in order to make their own argument stronger."

As we frequently point out, we don’t need to know the specific origins of all of these photographs to definitively determine that they’re fakes. The square-cube law makes it a physical impossibility that humanoids of the size and proportions represented by these bones could ever have existed:

[T]hink of a six-foot man, who suddenly became twice as big. His surface area is quadrupled, and his weight is increased eight times. With all that weight, he wouldn’t be able to stand on his own legs, because although they may have become twice as long and four times as wide, his weight in the meantime became eight times heavier. He wouldn’t be able to stand, much less chase anybody around. His legs would snap off.